While searching for sites to get more Dub mixes I came across something else that is becoming a musical staple; Flea Market Funk.

These are mixes put together by DJ Prestige from vinyl. He has about 40 mixes out there and they are so good… awesome soul and funk that I am digging on. Most of the artists I have never heard before but the selections are great. The vinyl is also amazingly warm. You can hear occasional scratches and pops and one track I actually heard skip a bit. Instead of making me cringe it made me laugh and think back to my LP days. It added an organic feel to the mix. I have listened to about half of the mixes and have loved every one. I also love the “cover” pictures for the mixes. Nice touch DJ Prestige. A great cover can really complete the package. These mixes are awesome. Keep up the great work!

The 45 mixes especially made me think back.

I remember the first 45 I ever bought. I had my parents LP’s and the 45’s that my grandma bought me, but the first time I saved my money and bought my own 45 is ingrained in my memory forever. I bought it at G.L Perry Variety Store in South Bend, Indiana for 99 cents. I was probably about 10?

Perry’s was basically a tiny Walmart. They had a little of everything including pet supplies and fish and hamsters and such. At the front of the store there was a small record section, mostly Top 40 crap and I don’t recall looking much at them since I couldn’t afford them anyway, or would want any Partridge Family or Shaun Cassidy or TV Show Theme song compilations (at least at that time). They did have however a small rack of 45’s in paper sleeves. The 45 was still a big thing at that time. I would rifle through this rack and not recognize much. I don’t know if they were old stuff, or current, but my familiarity with current artists was pretty limited. I was however a child of the TV age and when I saw one particular 45, I knew it had to be mine. I bought it, they put it in a paper sack and I scurried home to put it on the giant console stereo.

My purchase was the 45 of “Sonny & Cher – Gypsy’s Tramps and Thieves”.

I’ve tried to put in perspective over the years this purchase. I was digging The Beatles and 3 Dog Night and Ray Stevens on 45’s grandma bought me and Neil Diamond and Barbara Streisand from my folks and a bit of Tom Jones and Kris Kristofferson. I can only surmise that I was enamored of this song from watching the Sonny & Cher show on TV. We watched that and John Denver and Andy Williams. I had seen Cher sing this on the show and maybe it was the only thing in the bin I recognized. I can’t really recall that part. I loved my 45 though. I played it over and over.

I even recall the B-Side. It was written by Sonny Bono. It was called “A Cowboy’s Work Is Never Done”. 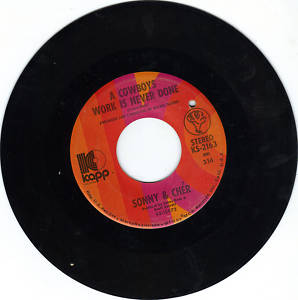 Even then I realized that it was not great. I loved my 45 though and I played it plenty.

This 45 was not funky enough to end up on any mixes at Flea Market Funk but it did make an impression on me in a big way back then.

FYI, eventually I did end up buying TV Theme songs from Perry’s eventually. It had Laverne and Shirley, Chico and The Man, Welcome Back Kotter, Happy Days and other favorites.

I am proud to say I knew enough to get the “by the original artists” version.

I had my standards after all.