Today would have been David Bowie’s 70th birthday. I along with the rest of the world are faced with a 3 day stretch that include both his birthday and sadly… death.

2016 took a lot of musicians with it, for me however, none was as staggering as David Bowie. In fact, it affected me in ways I really didn’t understand. I listened to side 1 of “Young Americans” over and over for a week and most oddly, was unable to open my pre-ordered copy of “Blackstar” that had been delivered.

For whatever reason, I decided to pay a bit extra and got the clear vinyl version. It was sitting there still in the box (I was waiting to do an opening video) when I heard that he had passed. I was stunned like the rest of the world. However, while the rest of the world devoured “Blackstar”… I just kept listening to “Young Americans” side 1. I could not bring myself to even open the shipping carton, let alone the album itself.

Ridiculous? Maybe… I just didn’t think the time was right.

I tried to stay away from most reviews of the album, but eventually had gleaned enough to know a bit about what I will be hearing, but I still couldn’t open it.

About 6 months later, when things had calmed a little, I was able to find a black vinyl version of “Blackstar” and ordered that. I still haven’t opened it.

Then, during a period when I was not working and my idle hands needed to create, I discovered that I could cut records into portraits of musicians as good therapy. My first creation?

It was a bit jagged but a success nonetheless. I went on to turn this into a hobby and Etsy store, but moreover, I think it helped me to get out whatever it was that was keeping me from experiencing more Bowie.

January 10th I have set aside some time to open and listen to my black vinyl version of “Blackstar” for the first time on the unfortunate anniversary of Bowie’s death. Like back in the old days of album buying, I plan to sit down, pour over the liner notes, listen along, wonder at the pictures and design, and just immerse myself in it for the duration.

I have seen pictures and videos of the inside of “Blackstar” so it will not be a complete surprise, but I’m sure there is still much to discover.

Yesterday, Joe and I stopped into Guitar Center to get him some new strings. While we were there I discovered that they sell vinyl albums. 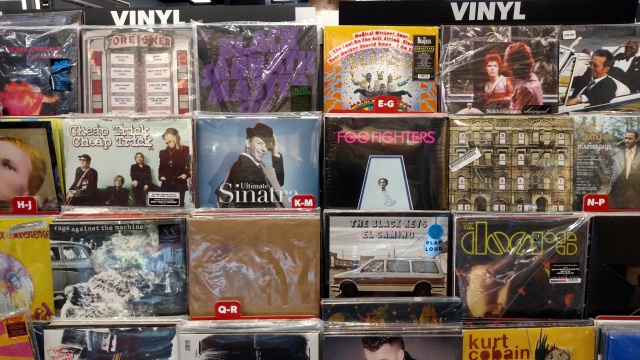 The prices were staggering (sorry Guitar Center) but I checked out the “Nothing Has Changed” album you can see top right, and then I noticed it… you can just see it on the right side of the shot. There was a copy of Blackstar, opened and ripped, sitting there.

Bowie’s Lazarus face was showing through the star on the cover.

So cool. I love the stars too. I have made cutouts of those for my music room.

These are also cut from vinyl. My medium of choice.

Holding the album in my hand I did peek into the gatefold and saw the inside but stopped short of taking the sleeves out. It seemed like a sign that I had run into this as I prepare to open and listen to my copy.

I am fully aware that waiting a year to listen to this album was weird, and there is a faction of folks who would probably say that the buildup will ruin it, that it can’t live up to the high pedestal that I seem to be putting it on. I am prepared for anything though and no matter what the music does for me, it’s knowing that he put this album together knowing that his death was imminent that makes it such a vital experience.