“A Farewell To Kings” 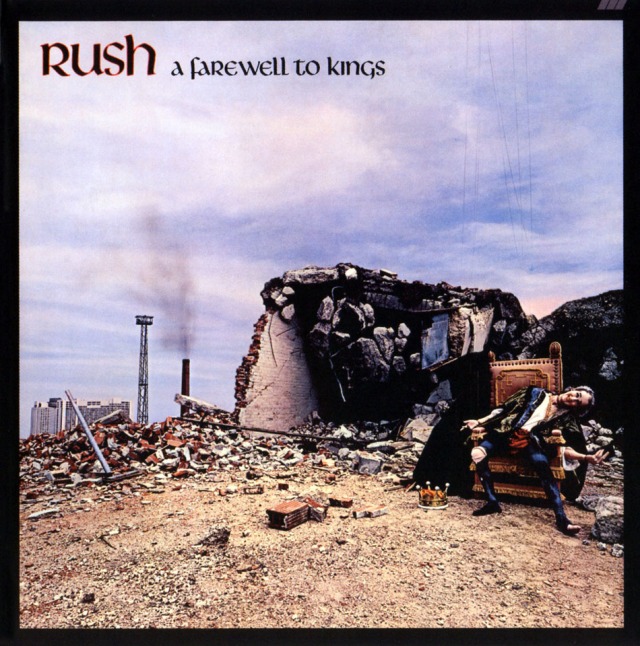 This album was pivotal for me. I had heard 2112 and seen the ridiculous picture on it (but still love the album). I had “Archives” (a comp of the first 3 albums) and been made an all out fan. It was “A Farewell To Kings” though which seemed to blend all the rock from the early albums with the grandeur of 2112 into something admittedly less over the top for the average listener.

The only song on this album I have issues with is “Closer To The Heart” and that is only because my lunch room rockers played it constantly on the jukebox. That is NOT its fault.

This album had it all.

They dabbled with extended tracks with “Xanadu” which was like a condensed 2112, and “Cygnus X-1” which hit me right in the sci-fi lover heart. I was SO into that stuff at that point in my life. The song still gives me chills and I generally can only listen to it at ear popping volume.

I am listening to my vinyl copy right now and have just reached Cygnus X-1.

I have to say that despite how great the music is, the real thing that gave me pause as I sat in my room and listened to this album and read along with the lyrics… was the picture of the band on the inside right of the gate fold cover.

THESE guys were not wearing crazy wispy white outfits that were caricatures, but (at least for the time and place) normal clothes. Geddy is wearing some ginormous high tops, but is in t-shirt and jeans. Alex is in a suit jacket with t-shirt, and Neil… well Neil is in boots and big sleeves, but still better than on 2112.

This picture put the guys in a whole new light for me.

The mansion quality and countryside outside of the huge door made me picture Canada and the soft focused light washing them out slightly made them seem ethereal.

It could have been taken anywhere I suppose, but it seems to me the perfect representation of the sound that Rush had become. Smart rock that had a heart and wasn’t afraid to do whatever they wanted. You want 2 songs over 10 minutes. Sure. Go ahead.

The music and the picture defined Rush in my mind for a long long time.

It was my joy to attend a Vapor Trails tour show 2002-2003 (?) with Dalton. We were pretty close on the Alex side of the stage and it was awesome. They had a video screen playing videos along with the songs and in one a dragon breathed fire and flames blew out over the stage and I could feel the heat. Mind blown.

Interestingly, I don’t think they played even one song from this album.

I still love ya guys.