The Concerts For The People Of Kampuchea.

This album was always around when I was in High School, a permanent cut out record, which was the early version of the discount bin. They would cut off a corner of the cover, or cut a short groove through one of the corners and sell it cheap. I saw it a lot. However, as a sheltered suburban kid I had no idea where Kampuchea was or even what the issue might be. No one I knew had this and I don’t ever recall hearing anything from it. At that age I eschewed albums such as this for the simple fact that I could barely afford the albums I desperately wanted from artists I knew and loved, and buying an album with artists on it I had never even heard of before seemed like a quick path to disappointment.

This was before Live Aid where people (me included) discovered that charity or fund raising concerts could be amazing. I still recall sitting and watching Live Aid on TV in my rented room off-campus at UW Milwaukee. It was an event. I recorded Bowie’s performance on cassette (now lost to time) and saw the amazing Queen set. It was a cultural touchstone.

I will start by saying this. At the time this album was in my orbit, I didn’t know who some of these artist were. The Specials, Rockpile, Ian Drury were unknown to me, The Pretenders I had heard of but wasn’t into and who the hell was Rockestra? Also, The Who, all of side one of the album, who were known to me but only as “My Generation” and the song I thought was called “Teenage Wasteland”. I had no idea what “See Me Feel Me” or “Sister Disco” was so that basically made 1/4 of this album a gamble. I knew and LOVED Paul McCartney and Wings, but as I said, had no idea who Rockestra was and even if I did, one album side of great stuff was only 1/4 of it. So… with unknown artist and no guarantee my scarce money was going to produce pure joy if I purchased this album, I always passed on it.

I ran across this again in the discount bin, newly burgeoning return to vinyl addiction in full swing, and now I AM familiar with everyone on this album. Plus, it was $1.00. A double album for a buck, I was finally tempted enough. I bought it.

Note the aforementioned cut-out in the lower left corner above. 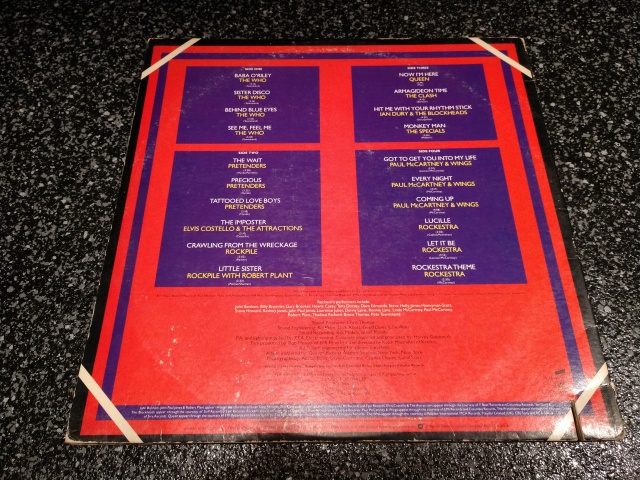 I recently cleaned this and sat down and really listened to it closely.

As I listened I read about it. Here is the Wiki page:

Paul McCartney was co-organizer of the event, and it was the final concert for his band Wings. At this point in my life I now realize what Rockestra is, so am looking forward to side 4.

Side 1 : The Who get an entire side of the album and I have to say that Roger seems a bit tired and off his game on these tracks. That being said, they are still good. “Baba O’Riley” and “Behind Blue Eyes” are classics. Even performed poorly they would shine. “Sister Disco” seems like an odd choice for this album, but being recorded in 1979 perhaps it was more topical. “See Me, Feel Me” has never been a favorite of mine. So overall, good, but if you are thinking of buying this based on loving The Who, you can do better.

Side 2: I have always felt very lackadaisical about The Pretenders, largely I suspect because all I ever hear is “Brass In Pocket” which isn’t bad, but has achieved overplayment at the level of “Stairway To Heaven”. So, to my surprise, I found The Pretenders tracks to be really awesome. She really belts it out. Elvis Costello who only gets one track at least does it well. I like this phase of his catalog, his shout it phase as I call it before his dark solo stuff and Burt Bacharach phase. The 2 Rockpile tracks are good too. Love hearing any Robert Plant I can get. Probably seemed a crazy pairing back then. These days, to his credit, Robert has made a career of collaborating.

Side 3: I was stoked to hear the one track from Queen. The version of “Now I’m Here” from “Queen Live Killers” is a part of my soul. This one is NOT that version in any way. It is good, don’t get me wrong. Brian May’s guitar is fluid aural art and Freddie’s voice is strong. There is SOME audience call and response with Freddie’s vocals, but very little. The Wiki page details each full concert and the songs performed by each artist.

These were in fact full concerts that these songs were cherry picked from. Looking at the list for the Queen show, I think they could have done better.

Now, The Clash. They only get one track and someone chose “Armagideon Time”. For me that works. I LOVE their dub tracks. This one is utterly cool. Joe Strummer melts my speakers and I have to crank it up. I know I am probably among the few that think that this was a good direction for them to take here. Most would probably prefer “London Calling”, but hey, it was my buck. Ian Drury & The Blockheads is next with “Hit Me With Your Rhythm Stick”. I found it to be tolerable. Sorry Ian. Last on Side 3 is The Specials doing “Monkey Man”. I didn’t really know who The Specials were until about 5 years ago but as I looked over the track list at the record store it was this track and the Paul McCartney that tipped the scale and loosened my wallet. This track is stupendous of course. The Specials first album is a fantastic album. Stop reading right now and go play it if you have it or go buy it if you don’t.

Side 4: Paul McCartney has this side. “Let It Be”, “Every Night” and “Coming Up”. These tracks are great. The music is strong, his energy is up and I loved these. Then come the Rockestra tracks and they rock out “Lucille” do “Let It Be” and finish with “Rockestra Theme”. All fantastic. This album side is worth the whole buck for sure.

So ultimately I guess I can see why this has never been released on CD, it’s more of a collectors item. That being said, even at a higher price than a buck I think it’s a great album to have. You won’t break it out for a party, but it’s nice to have to spin on a Sunday morning.

Or while you are writing a post for your site.