It was 5 years ago today that we lost Dalton.

In an incredible testament to the half-life of the internet, his YouTube channel still exists. 99.7% of what he has saved out there is just clips of musicians on late night talk shows, but there are a few personal videos.

One of those is a video of concert ticket stubs from shows he had seen. I remember scanning them all for him so he could create the video. Once I had them all scanned and delivered to him I made a collage of them all a surprise for him to hang up.

When I stumbled on his ticket stub video a few weeks ago, I knew I had to post it here. He set it to the Peaches song “Rock Show”.  Check it out.

While watching this a couple things sprang to mind.

First, somehow I never realized he had seen Yes! 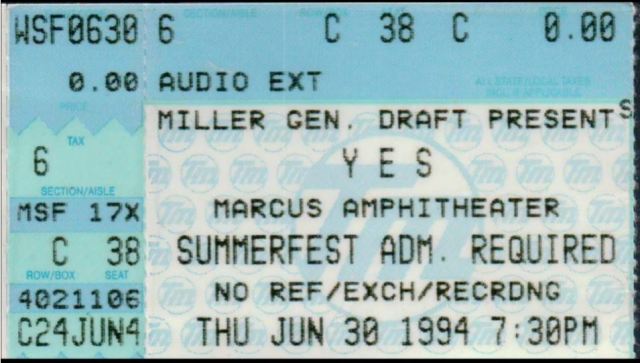 I scanned it. I must have noticed, however, Dalton never really played Yes that much. I don’t think he had any Yes vinyl, and he never put any Yes on any mix tapes that I can recall. Surely I must have asked him about this at some point, but it’s a total blank. Weird.

Then there was the L7 show.

I think I have written about this show before. Since they cruelly ripped the ticket in half you can’t see all the info. This show was with Tad and The Melvins. It was October 1, 1994. Dalton stood with me at the edge of the mosh pit, then would say “I’ll be back” and then disappear into the meat of it, only to return in a song or two sweaty and exhausted. At one point he had managed to grab a pick they threw into the crowd. He taped it to the ticket stub. Bonus.

Here is mine, which I had given to Dalton after the show (I foolishly thought I didn’t want my stubs), which he returned to me when I did all the scanning. What a dude.

Finally, there is this stub from the Rush show that he took me to. Dalton didn’t like to go to shows alone and often would call me up and say “I’ve got 2 tickets to (fill in the blank)… wanna go!?” This was the case for the Rush Vapor Trails tour in 2002.

I drove us to this one and Dalton got the tickets. It was an amazing show. We had great seats off to the side a bit and Alex was in front of us jamming HARD. I remember vividly a backscreen video of a dragon that was breathing fire and huge flash pots shot fire towards the crowd. I could feel the heat, it was incredible.

Is it a cheat if I print Dalton’s stub and put it in my ticket stub book? He didn’t have my stub, but it’s the same show. I’ll wrestle with that decision at some point.

Thinking of you today Dalton.