When I was young I used to dream of a time when I had a home where I could create a special room for listening to music in. All my stereo stuff would be racked and placed in there. Giant speakers, big stuffed chair and the latest issue of Rolling Stone. Music could be played as loud as you wanted it and it wouldn’t bother the people in the apartment below. The music man cave.

It seemed we were always in a place that I could never turn it up to 11 as they say and jam. There were always neighbors to worry about. Understandable, but my music room dream lived on.

I remember seeing in a magazine an article with pictures of a special room that John Belushi created in his home especially for his music. It had padded noise dampening panels on the walls and his stereo stuff on racks and it was amazing. THAT was what I wanted. I tried to find that article recently, no luck, but I did find this in the Anchorage Daily news of all places??: 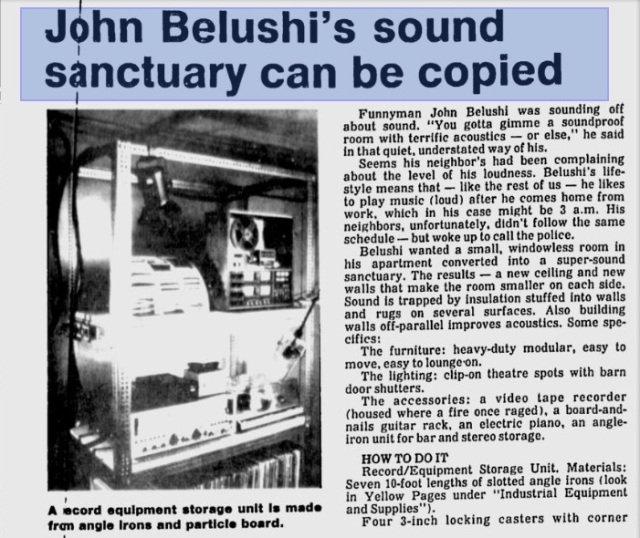 Since I couldn’t crank the stereo up… I put the headphones on. I had the big padded over the ear jobs that are making a huge comeback now. They made my ears sweat and the music hammer into my ears. If I needed to listen to “The Crunge” at full volume, the headphones were the way to go. They completely drowned out the world and filled my head with sounds. Mom would flick my bedroom light on and off if she needed me. I also had a headphone extension cord. This allowed me to roam the expanse of my room while cranking it up. The only downside was if the connection got pulled or bent over something the sound would drop out. Annoying, but better than the neighbors pounding.

The sound in the headphones was fantastic. You could hear things you didn’t notice when played through speakers. Most often that was good. One song though messed with me. When the “Fleetwood Mac – Tusk” album came out, I bought it and played it for the first time with my headphones on. During the song “Tusk” I swear I heard my mom call me. I pulled the headphones off and yelled “WHAT?!”. There was no answer. Puzzled, and not in the habit of going to find out what I put my headphones back on. I heard it again! I swear I heard someone say “Mike”. This time I took my headphones off and went to the living room where my mom was sitting quietly on the couch and looked up at me with a smile and a “Hi Mike” when I came in. I asked her is she called me and she said “huh?” I told her I would swear she called me and laughed and went back to my headphones. I restarted the song. I heard it again. I started it again and uncovered one ear and confirmed that it was in the song and not in the apartment. Funny. You got me Fleetwood Mac, you got me.

Eventually my sit in my room and listen to music for hours with nothing else to do was music was replaced with a job. Though usually I managed to find a way to listen to music at work too. Lots more on that later.

When the kids came, I had to for the most part hang up the headphones. It just wouldn’t do if I were lounging on the couch blasting “The Stooges – Fun House” in the headphones while Abbey or Max were crying or calling me from upstairs in their room. So I listened to the dulcet tones of them sleeping and breathing on the room monitor and listened to Iggy on 4 out of 10. It was a necessary dark time for my music and me.

When they were older I couldn’t shake the headphone ban mentality but I did start turning it up. They could come find me now if they needed me. This open playing of my music I think may be responsible for their love of music now. You’re welcome kids.

Max just told me recently that while playing Pandora at work he recognized music I used to play when he was a kid. I would crank the music and clean house on the weekends. As I recall my favorite was  “Temple Of The Dog – Temple Of The Dog”. Max remembered me playing some White Stripes he heard on Pandora too. In, a touching father son moment he asked if he could borrow some of my DJ Shadow. Good job Pandora. I digress.

Not having a music man cave soon took a back seat to having storage for all my records and tapes and CD’s.

I still had all my records at this point, I was trading bootlegs and still buying tapes and CD’s. They were everywhere. That was why there were piles of tapes and CD’s by the stereo all the time. This was an increasingly substantial problem. We even bought an entertainment center specifically with cabinets so I could hide most of my stuff. When my bootleg tape collection topped 100 tapes though, the tipping point was reached. I had to keep my stuff in another room. There just wasn’t enough space. So I kept it all in the back bedroom and once a week or so collected all that had accumulated by the stereo and put it all in a plastic bag and returned it to the back. Week after week.

Then, when the Sentry store I worked at remodeled they were throwing out what had been the carton cigarette rack. This was about 6 foot high and 3 sections wide. There were adjustable shelves just the right size to hold a carton of cigarettes. If every other shelf were removed, a tape would fit on the shelf the tall way. PERFECT! One night before the weekly trash day, I loaded them in the car and brought them home. They were NOT well received at home, but the sheer volume of tapes they could hold in a small space prevailed and they stayed with me for years.

In hindsight what I needed then wasn’t a music man cave for playing music. I needed one for storing music like the one Jimmy Page has. This is a still of him in it from the “It Might Get Loud” movie out a few years ago. 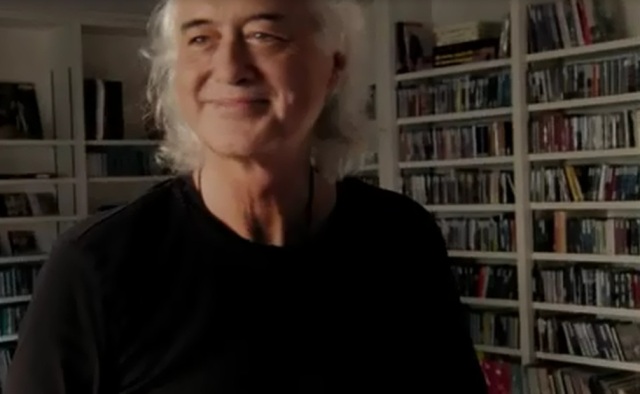 Now that is awesome. I’d be smiling too.

When we moved to a duplex years later there was no place for them but in the basement, and that is when excessive piling by the stereo occurred. Sigh. By that time though I was done trading and my collection topped off at about 180 bootlegs and 75 or so other assorted store bought and recorded tapes. It had 2 sections of my carton rack completely full and I was into the 3rd. It was a lot of tapes.

When we moved to the house the racks had to go. They were set out with the trash (goodbye my friends) and I boxed the bootlegs for the move, where they stayed until last year when I got interested in digitizing them.

Nowadays I don’t use the stereo but for rare occasions and my headphones are reserved for nights when I can’t sleep. I don’t dream of special rooms for listening to music, or have any need of a special room for storage. I carry all the music I own on a external hard drive with me every day.

Interesting how things evolve and change.

So I may not have a music man cave, or a special room to house my music collection, but my music is still a key piece of my life. I still get excited about new music and still love the old, no matter where I am getting it from, or how I am listening to it.