I have 4 more ticket stubs, some found, and some donated.

First is David Bowie from The Marcus Amphitheater, MilwaukeeWI, September 11 1987. 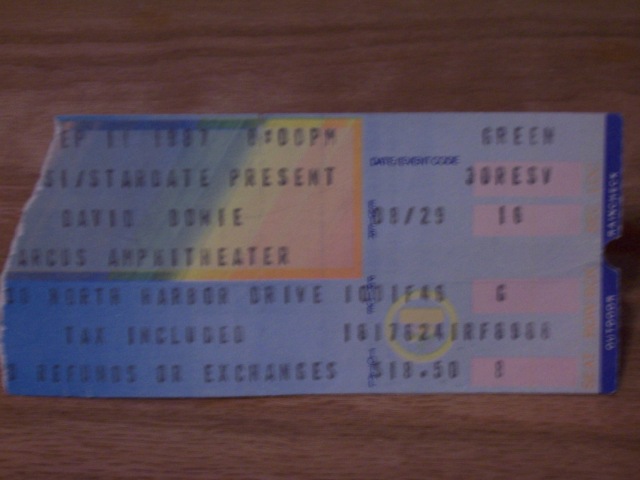 This show was amazing. I have to say that I was not really impressed with David’s Glass Spider album, but I knew he would play old stuff too. He did. Plus the grand spectacle that is a David Bowie show made up for what I thought his new songs lacked. There were crazy dancers in the rigging up on scaffolds and jumping on stage and going nuts throughout almost the whole show. There was always something to look at. Bowie’s voice was perfect and guess who was assisting on guitar… Peter Frampton! I know, right?! He came out first and did some crazy stuff on the guitar before David came out. It was mind blowing.

To say that Bowie is a tremendous showman and that he had us all in the palm of his hand is an understatement. We were all enthralled. The sound was incredible and every song seemed to be musically tight and not speeded up like so many shows where they play faster versions of songs just to get a few extra in, in my opinion making them seem forced and thus losing quality. My opinion.

This show was single handedly responsible for me going off the deep end on Bowie collecting. There are worse things I suppose. 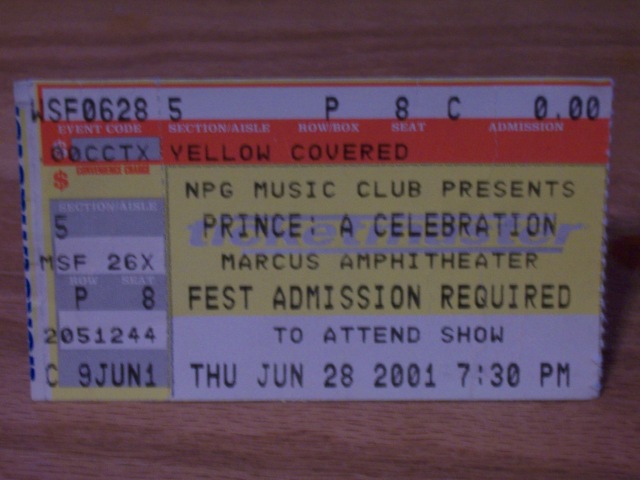 Kris B. from the Engineering department at Marshall Erdman asked me one day if I wanted to go see Prince that night. The tickets were won by someone on the factory floor who couldn’t go, and passed them on to Kris. Boom. Free show. We took some canned goods to get into Summerfest free and it was on!

Prince was on FIRE. I was amazed at what a little guy he really is, but his guitar made him huge. It just so happened that I was in a very heavy Prince phase and so this was perfect timing. He played all songs that I knew. The NPG was flawless and Prince just squeezed every ounce of jam out of his guitar that it could produce. The show was a spectacle I will never forget.

At one point he brought people from the crowd up to dance onstage. So cool. I was in awe as he left the stage. We waited and he came back out of course and ripped through a few more songs, blowing our minds some more. Then walked off again.

We made it halfway to the exit and he came back again. OMG. We stood glued to our spots and watched 2 more songs then grudgingly looking at our watches with work the next day, had to leave.

The next 2 are from the same band. Dalton actually gave me these, my originals I sold (stupid, sorry) but he had an extra from each. Thanks dude.

This show I went to with Dalton as a birthday present. My first NIN show. This show opened with The Jim Rose Circus. Rrrrrrruuubbber Man! It was a rock and roll freak show. People hanging weights from their tongues and walking on sword edges and Rubber Man passed himself through the opening of a tennis racket. It was interesting to say the least. Dalton and I still comment on Rubber Man.

The Jim Rose Circus was followed by Marilyn Manson. He was insane. The few images of his part of the show I can recall I may want to purge someday. Crazy. The moshing down front looked deadly from our vantage point in the balcony. I was just fine being up there. Manson was clearly using his shock potential in equal proportion to his music. There was no arguing that the music was strong and great. I couldn’t help love it despite the stage show. I was barely familiar with the tape of Manson that Dalton gave me a few days before the show, but I enjoyed it all the same. This was the start of my Manson appreciation that continues to this day. It sure primed me for NIN that night.

NIN was sublime in my opinion. The lighting and the sound and stage were all fantastic. The spectacle of the stage presence of the band was superb. I enjoyed watching the rest of the band as well as Trent. It was a good lineup. He did almost every possible song that I could want to hear and then some. I was in total rock god trance. Every song was beyond awesome.

I remember the moshing again, going very hard and scary during most of the show. Trent would throw water on the up front crowd whom I suspect were a hot sweaty mass of humanity. He threw full water bottles out too. Nice touch. Every time a song started I would look at Dalton with that “YES!” face and close my eyes and start head banging. It was an amazing scene and done way too soon. I was high on that show for months.

Luckily I had another chance (again thanks to Dalton) to see NIN. 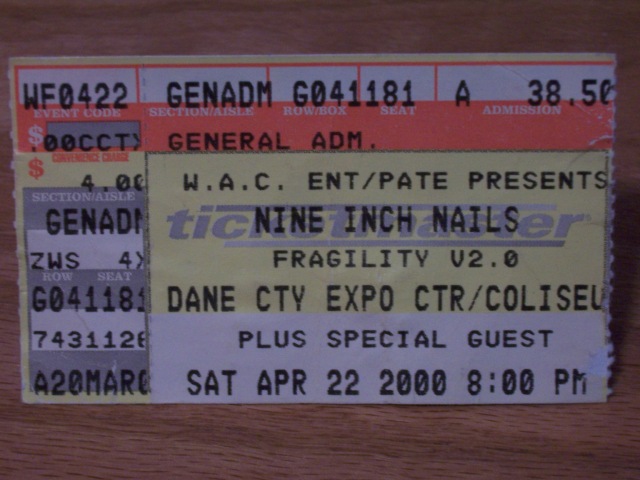 I don’t recall anyone opening for this show. We were up in the balcony again this time, but right on the rail. In my opinion the best seats in the house. We could watch the mosh pit but be far away from the chaos. I couldn’t even begin to imagine being down there for that. I am more of an observer. I probably would have lost my glasses and been bummed the whole show.

This show was amazing too. What can I say about it… every song was crazy good and the atmosphere was fantastic. I loved every minute of it.

Though later he would comment that he was sick for most of the tour and felt they were not performing up to standard I for one did not notice. Though Trent did leave the stage at one point and from offstage told the crowd that he had just puked and was sorry for being sick. Then he came out and did Hurt with the decaying animal footage on the big screen. Mind blown.

I was able to see NIN once more in 2006 with Bauhaus (scary) and Peaches (awesome) again with Dalton as my rock and roll guide.

Many thanks my friend.