On Saturday Cindy and I went to a wedding reception at The Capital Brewery in Middleton Wisconsin. The weather was perfect and the reception was outdoors. We were pleasantly surprised to find that there was live music… AND, that the band was one that Cindy had seen before: The Kissers.

The Kisssers, Cindy informed me was an Irish band she had seen several times and knew were very good. As it turned out they had friends in the wedding party.

I was of course enthralled by the notion of seeing live music. I guess it’s been a while. Maybe I’m forgetting something, but NIN in Milwaukee was the last live music I can recall seeing. At any rate, I was wide eyed and ogling the band and equipment. 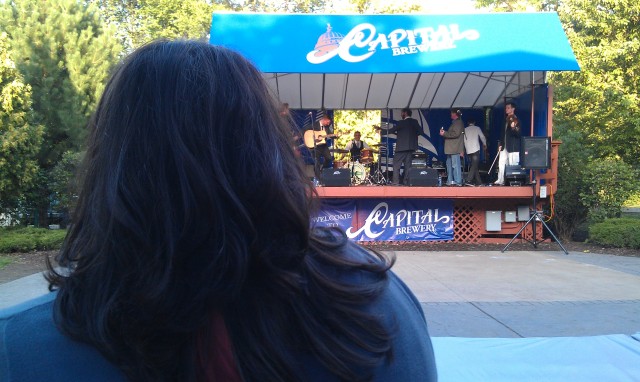 You can see 6 members of the band (it was arguably more of a picture of Cindy than the band, but it will suffice) but on the left there are three band members you can’t see. One had an accordion, one had a guitar and the other a fife or a flute or something in that family, no disrespect intended. He could really <wail>? on it. Not exactly a jam instrument, but it did give the Irish sound a resounding stamp. There other instruments were acoustic guitar, bass, mandolin and on the far right a violin. He made that violin sound crazy when they did Booker T. and the M.G.’s “Green Onions”.

As they were getting ready to play it struck me that this was the very first live music that Cindy and I had ever seen together. I know I know… dorky, but for me, noteworthy.

The music was great. I am trying to absorb all the Irish I can and this was perfect. They played some traditional classics and some originals. The fife was amazing and the accordion… well, it was unbelievably good as well. There were enough instruments to keep my eyes jumping around and there was a guy dancing, the only one, with carless abandon which was both crazy and intriguing. He was either drunk or amazingly unselfconscious.

Turns out it was the latter.

Later in the evening the crazy dancer joined the band onstage and belted out some Elvis tunes. Apparently he was a band friend. He sang “Teddy Bear” and added a cape during the second song “A Little Less Conversation”. Then for the climax of the Elvis block he broke out “Can’t Help Falling In Love With You”. It wasn’t exactly in key, but it was slow and despite my previous conviction to not dance together before the wedding, it seemed too good a chance to pass up. I asked Cindy to dance and we found a secluded corner and gave it a shot. I am a terrible dancer. I do my best dancing in a chair looking at the band. It was a good dance though. Even with the off-key Elvis.

Thank you for saying yes Cindy.

Update!  Found another picture of the band that includes the guitar, fife and accordian player on the left side of the stage. 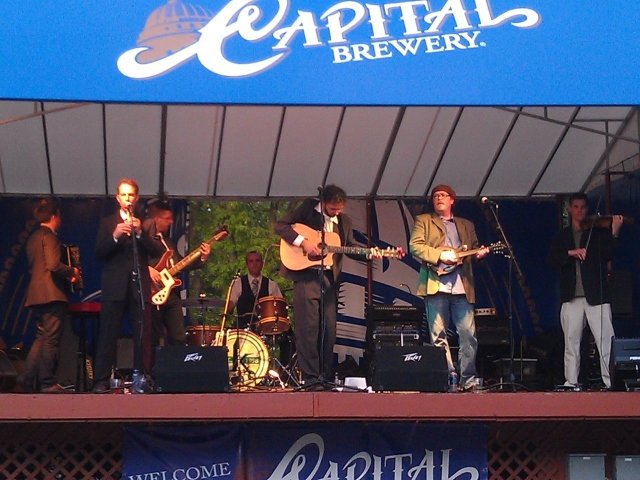 Sorry, no picture of the fake Elvis.