During my recent basement cleaning session I unearthed a prized relic from my musical past.

Now you have to understand that from the time I was a little kid, I always thought that a reel to reel tape deck was the primo golden ultimate in tape recording. I saw it used on TV shows from the era as stereo equipment and even years after as police surveillance equipment… reels turning slowly to record phone calls in sweaty vans parked outside mob bosses houses. I always assumed they were crazy expensive (since I knew a lot of music lovers and no one had one) and that you needed to own a velvet smoking jacket and drink bourbon as you listened to jazz from your slowly turning reels.

This reverence of the reel to reel never left me.

In my college years, when I was renting a room in a house just off the UW Milwaukee campus, which I just had the pleasure of pulling up to and snapping this pic for posterity sake, my room was in the peak hidden by trees and I had a slope ceiling in half of my room because of the roof. 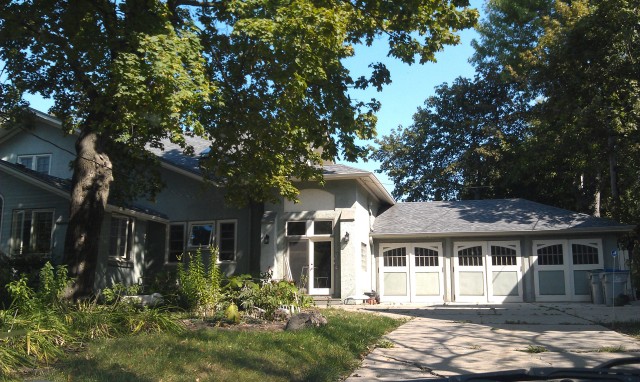 I had my stereo and the big speakers I had hauled with me from Ann Arbor, to Roselle and now to here. I had a record player and receiver and tape deck: all the essentials. That year 2 pieces of equipment came into my life and I was forever changed. One was an equalizer (another primo golden ultimate – and more on that later) and the other was in fact a reel to reel tape player.

The owner of the house drafted the renters one day to help clean out the basement. It was full of crap that previous renters had left behind. Originally the owner had kept this stuff in the basement based on promises that they would be back for the stuff, or that he could sell it for the rent they still owed, also so that he could stage the rooms so they looked homey and warm and inviting for potential renters. I needed a room BAD and he could have had the room filled with a stray mat and I would have rented, but that is another story.

He had pre sorted the stuff into piles of stuff to move to the garage, stuff to be looked over by us to see if we wanted it and a pile that was to go out to the garbage. Big trash day was coming (every poor college student’s favorite day) and he wanted this stuff out by the curb a day or two early so it had a chance to disappear.  I looked over the potentials and since I had no room left IN my room, I passed on it all. So I moved to the trash pile to start hauling and I stood transfixed by the sight of something there.

“Uh… what is the deal with this?” I asked the owner.

On top of the pile of stuff destined for the curb was a reel to reel tape deck. No lie… just thrown on top of the pile like it was garbage. The owner proceeded to tell me that someone had just left it behind in the room when they moved out and that there was no power cord and he assumed (since they left it behind) that it probably didn’t work and it was therefore garbage. In a voice that in my head sounded like a squealing 10 year old I asked him if I could have it. Even if it was not working it was the most amazingly coolest thing I had run across in years and I had to have it. He looked at it for a second and then looked at me as if I was asking if I could have an old rotten banana peel and said, “Sure, as long as you haul the rest of this stuff out, it’s yours.”

I hauled the stuff and then I picked up my prize and cautiously took it to my room. It was dusty and  the power cord was indeed missing and but there was a tape still on it. That gave me hope. I spent weeks staring at this reel to reel which I had added to my component stack and wondering what magical music was recorded on it. I might never know. Back in the day I had no idea what e-bay was or how to go about finding a power cord for it. I was contented just to have it. That might be where the story ended… but one night while working at East Side Foods (more on that later too) I mentioned to one of the second shift guys that I knew but rarely saw that I had gotten the reel to reel but that I was being tortured since there was no power cord. He mentioned off handedly that his dad could probably fix it for me. He did some electrical work and might be able to rig something for it. I was like, don’t play with me man. He assured me that he would take it to him and have him at least try.

It was another week and a half before we had an overlapping shift, but that night I got a ride to work and brought the reel to reel in and let him drive off with it an hour later. I made sure to emphasize that I wanted it back whether he was able to fix it or not. It was going to be 2 weeks before I would see him at shift change according to the schedule. It turned out to be 3. He forgot to bring it that shift. I was distraught. He could see it in my eyes that night. He brought it a week later, when I was working. His dad had spliced in a cord from some old piece of junk and verified the power came on when the reel to reel switch was thrown. So it had power. I was ecstatic. I couldn’t wait to get home to try it.

Now I worked 3rd shift and rode my skateboard to work on a normal night. This was a problem. The 2 dudes I worked with at that time worked within walking distance and didn’t own cars anyway. So at quitting time I tried to figure out the logistics of hauling it home. There was no way I could carry it all the way home, and there was no way I was going to try and risk riding. My only real choice was to put it on my skateboard and roll it slowly home. My ride to work, which was 20 minutes on my skateboard on the way to work (mainly downhill) was longer on the way home. This was a long long long trip home. Every bump from a big crack in the sidewalk forced me to readjust the reel to reel in the center of the skateboard before moving on. I carried on, hunched over my reel to reel and arriving at my rented room almost 2 hours after my shift ended, back aching, but excited to turn it on and saying a small prayer that the reels actually turned and it would work.

I got to my room, plugged it and spent a few minutes figuring out how to spool the tape. I turned the tape on a few turns and reached for the tape directional switch and slowly moved it to play. The tape immediately started moving. Sweet! I checked the VU meters and nothing was happening there. I began to worry, and, it occurred to me that there were no speakers attached. I grabbed my headphones from the other side of the room and when I got back I was pleased to see the VU meters spring to life. There was music on the tape! When I plugged the headphones in I was in for an even better surprise. The music recorded on the reel was a Pink Floyd. It was a radio show that played listener requests. It was amazing. I played it endlessly, and it was actually responsible for a resurgence in my Pink Floyd appreciation. Everyone who came to my room marveled at the reel to reel and I was eager to show it off. I only had that one tape, but it was awesome.

If you look back at some of the entries I wrote about my old equipment configurations you will be able to see it in its glory. When I came across it in the basement it was hidden under a table. 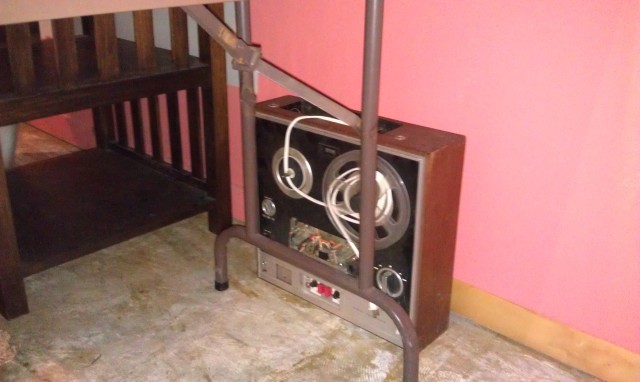 I brought it up plugged it in. It had actually been about 10 years since I used it last, so before I even cleaned it up I wanted to give it the power test. You can see the mainlined power cord. Excuse the dust. 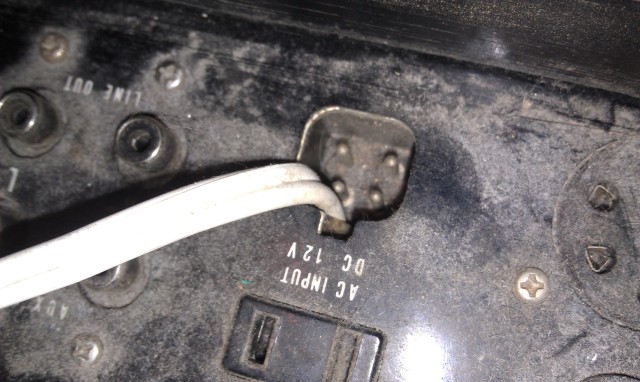 True to its history, despite neglect, it still worked as good as ever. 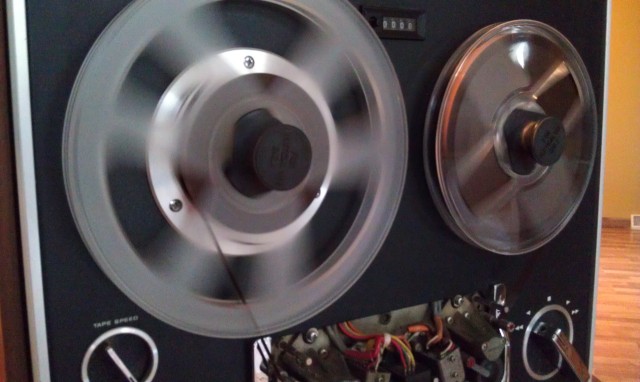 I only have 3 tapes left. 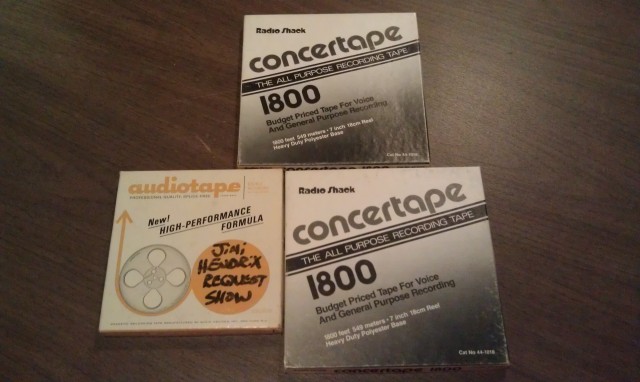 One is a Jimi Hendrix show I recorded from the radio and the other 2 are dubs of my favorite albums of the time. The original Pink Floyd call in show tape has been lost to history. I wish I still had that one, but the Sony TC-560DA still survives. 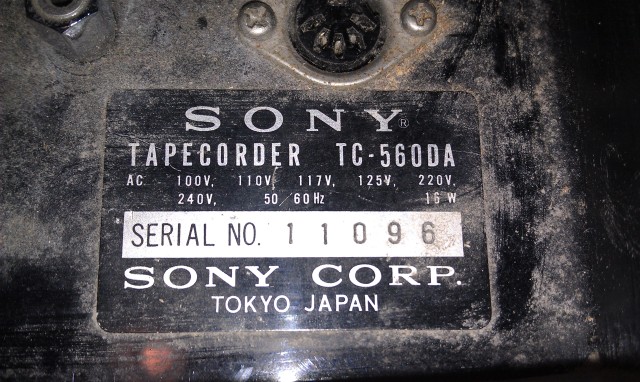 Only now minus the dust.