It was a picture disc, which never were very high quality, more of a show piece than a standard playable record, but WAY cool anyway.

“Whitesnake – Slide It In” 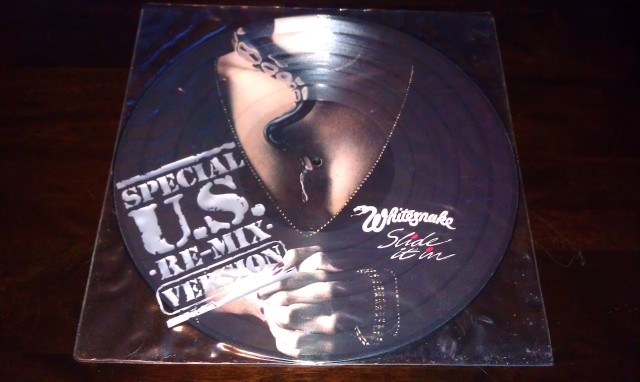 Even the back is picture-disc’d too. 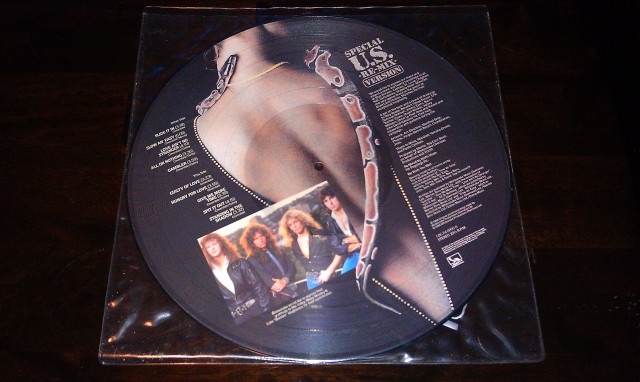 Dalton reported that there was a skip in the first track and I said I would check it out.

I put the needle down gently on the first track. The guitar riff started and boom it popped right into the middle of Coverdale’s WOOO intro. Ugh. So, I tried the only thing that ever worked back in the day when I had records. I restarted the record and put my hand on it to stop it right after the skip.

I know, this will make people with high dollar turntables cringe, but you could also kill the power and let the turntable spin free, but I wanted to be able to hear the effects of my attempted fix.

I rotated the album backwards through the skip. Then rotated it back and forth a couple times across the spot where the skip was. Then I lifted the needle, let the record go and started the album over again.

Now, there are 2 kinds of skips. One, you have bent the plastic of the groove and the needle has no choice but to get pushed back (or forward) into another groove. Two, there is junk in the groove. Neither are good of course, but, you can fix the latter. Actually I have found several articles that suggest if you can pinpoint the groove divot, you can fix it by pushing the groove back in shape allowing the needle to pass through. Seems risky, but I have a couple I might try it on.

At any rate… Dalton’s skip was the groove junk kind. When I started the track up again, Coverdale’s entire WOOO was intact. Success!

I called him to let him know. What? The skip he was talking about was in the middle of the song. Sure enough as I sat there talking to him I heard another, about dead center in the track. I tried the same procedure on that one. Stop the record, run it backwards through the track and then back and forth a couple times. It fixed that one too!

Some Whitesnake fan out there is going to be very happy my procedure worked.