So, on my Friday afternoon off I set out to entertain myself with some record shopping. I ended up going to Pre-Played and Half Price Books and ended up at Frugal Muse. I got some great stuff.

I found something I thought was a great find. It wasn’t what I thought it was, but still turned out to be awesome.

Back in the day I had almost every David Bowie album, even the ones no one wants from his “I am Anthony Newly” days. One of my favorites was this one. “David Bowie – The Man Who Sold The World” 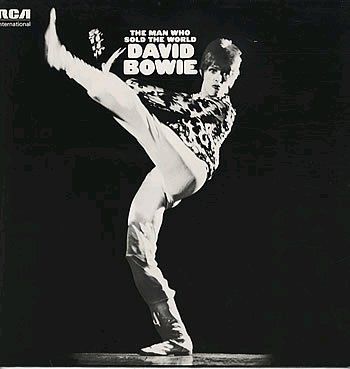 This one is one I went to when I wanted to introduce someone to Bowie. It has hard rock like “She Shook Me Cold” and sprawling pieces like “Width Of A Circle” and slow ones like “After All” and of course the classic “The Man Who Sold The World”. This one was not in the collection that Dalton bestowed on me last Christmas, so when I saw what I found in the Pre-Played bin I HAD to get it.

“David Bowie – The Man Who Sold The World” 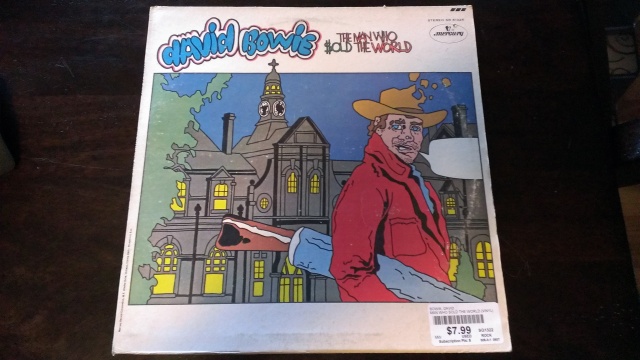 This cover was one I hadn’t seen before. I thought it might be a bootleg. It’s not of course. This is the original cover of the album. The one I had owned before was a reissued version. There is even another version still of Bowie in a “man-dress”. I guess that one didn’t catch on either.

This one however is the original. Drawn by Bowie’s friend, the mansion in the background is supposed to be the Cane Hill Mental Asylum. Note the empty word bubble. On the back is a picture of some people with a word bubble with the words “Oh By Jingo”

This is sung in the song “After All”. In a weird twist of synchronicity, while I looked up Oh By Jingo to see if I could figure out what that was about, I found this.

Which mentions people who have covered the song, In the list: The Reverend Horton Heat!

I am planning on seeing him in August.

P.S.  There was no mention of David Bowie in the Oh By Jingo link. Still don’t know what’s up with that. Still a fantastic album.

No matter what cover you have.