After a nice dinner recently, we were not ready to head straight home and decided to stop into The Hody in Middleton for a beer. They happened to have music playing that night which was a nice surprise.

We got in, got our beer and found a seat at stage right. The guys were playing a Bad Company song as we came in and then took a turn at some Bruce Springsteen.

All live music has something going for it, always something to watch. These guys were pretty good and we were digging it. I was watching the drummer pounding it out. That is usually my favorite part of live music to watch when they aren’t buried in the back too much. This guy was enjoying himself and fun to watch. The bass player was doing his thing smooth as could be and I was glad we were sitting on the side. I got to be close when the drummer played with 3 sticks. Cool.

They played all covers and tried their hand at some newer stuff, like Daft Punk’s “Get Lucky”, but the old stuff was what they did best. They had a song list that people kept going up and looking at it and requesting songs. The crowd was into it. 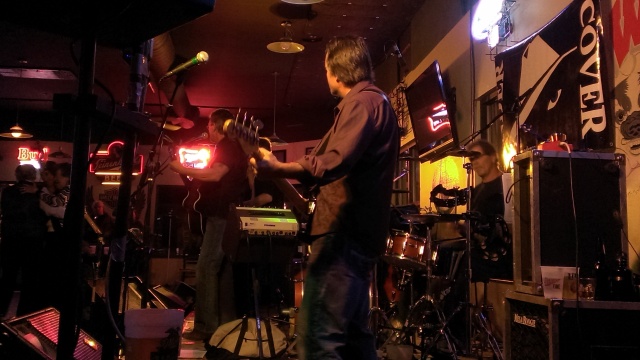 It was an interesting crowd there that night. There were people dressed as cowboys and Indians dancing, evidently a party that was passing through. There were some folks that were older, like older than me, that were out there doing their thing on the dance floor. I had to give it to them.

At one point they impressed me by playing a Paul Simon song “Late In The Evening”. I really like that song and they did it pretty well. Nice job boys.

Our we were there shot

We stayed for quite a while. They were fun. They are playing a bunch of local places nearby and we may go see them again. I even worked my way onto the dance floor a bit to get a better shot of the whole band. Looks like the bass player is wearing a big hat.

If you are looking for some fun time music to drink Bud Light’s to, go see ’em. I recommend sitting on the rhythm section side.