Whiskey for Christmas… Not a lot. Actually, probably just trace amounts, but I loved it all the same.

Cindy bought me, based on a conversation I had with her last year about Record Store Day (she is so good at remembering that kind of stuff!) about Eric Church. Eric is one of the country artists that turned me to sampling country music. Cindy turned me on to the single “Smoke A Little Smoke” and I loved it. A few months later I was dabbling in the local country stations.

The live album from Eric Church called “Caught In The Act” was released on RSD and there was a lot of buzz about it and it had a novelty 7 inch (know as a 45 back in MY day) that was made with whiskey in the mix. No lie.

I toyed with getting it at the time, but the day came and went and I didn’t end up with it.

Now, over a year later, it was one of my Christmas presents from Cindy! 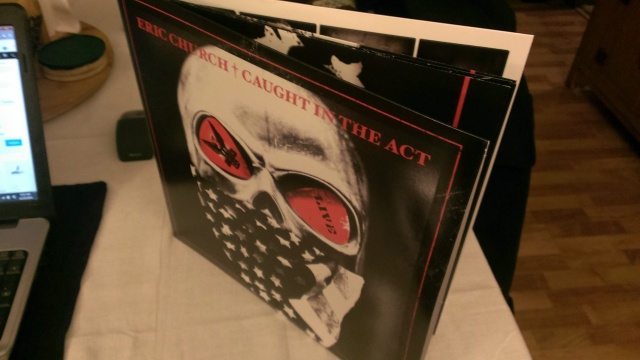 It’s a double vinyl, WITH a poster, and WITH the 7 inch whiskey single!

made of clear vinyl no less. Sweet.

It also came with a digital download, so I added it to my phone already to listen to at work and in the car. There will be a ceremonial playing of the vinyl, during the holidays, or perhaps during the week off I have after the first of the year.

Thanks Cindy! You are wonderful.