After getting the 2 White Albums I decided that my next purchase should be another album I once owned, “Let It Be”.  This one was one I listened to a lot. Particularly after seeing the movie with Jeff. I found a copy on Apple for a reasonable price and ordered it.

Later that week I went with Cindy to UGM for a dinner.

As we waited for everyone in the group to show up I talked to Otis about my recent Beatle revolution. It was a conversation steeped in nostalgia and I felt justified in my decision to begin my acquisitions of all the Beatle studio albums.

When everyone was gathered we went outside towards the area where dinner was being served. Guess what?! There was a Beatle Tribute band playing! I kid you not! Synchronicity!! 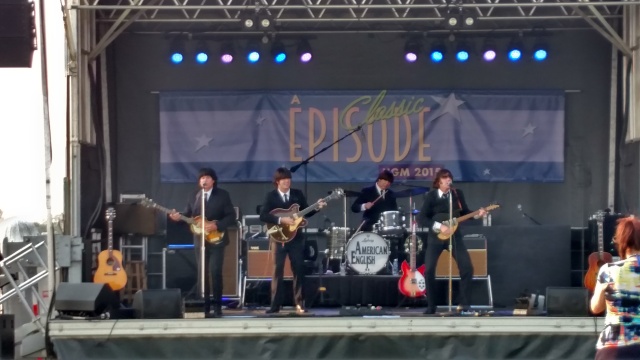 They were called American English and I have to say they were brave to endure the killer heat that day. They played the early stuff in these costumes, then came back to the stage after a short break in Sgt. Pepper clothes.

Otis and I were styling too in our giveaway Fez’s.

The whole Beatle conversation and music was all the confirmation I needed.