When I was in High School in the early 80’s it actually WAS like a John Waters movie. The cliques were fierce and there was a limited set of cliques you could be in. I managed to be outside them all and a part of them all at the same time. I was nondescript and non-threatening and dabbled in the Stoner/Rocker crowd, the Sports, the Preps, the Nerds and the New Wavers. You have to remember, all these groups loved their music, and that gave us a common language.

There was one music group that polarized them all.

These pretty boys were vilified of course by the Stoner/Rocker crowd. Playing Duran Duran on the jukebox in our lunchtime school cafeteria was a bold move that was entertained by only a few brave souls. At lunch the Stoner/Rocker crowd sat in the closest proximity to the jukebox so as to better absorb the Scorpions and Ozzy and AC/DC that blared from it. To this day when I hear The Scorpions “Loving You Sunday Morning” I swear I can smell cafeteria food. At any rate, when you approached the jukebox you were memorized and filed away so that if anything “horrible” came on they knew who to blame. More than once I saw this same jukebox hip checked to skip a song that was deemed inappropriate by the near crowd.

The mornings with the “before school crowd” were less contentious. Most of the Stoner/Rocker crowd was outside smoking, or not even AT school yet and the lunchroom was sparsely populated with those of us that got rides, early busses, needed to study for a test or were feasting on chocolate milk and donuts. All me. There were a few Stoner/Rockers there, but in fewer numbers they were not a force to be reckoned with. That was when you would hear “Rio” and “Hungry Like The Wolf” and I loved it.

There was a fear in me though. To outright state that I liked Duran Duran would bring me closer to the New Wave crowd, but I would be shunned from my Stoner/Rocker friends. It was a conundrum. So at school I was nonchalant about Duran Duran, but at home I would delight to their videos on the afternoon video shows. That’s how they got in my blood.

After I graduated however, Duran Duran and I went down different paths.

We did reconnect briefly over a 1993 spinoff album.

“Arcadia – So Red The Rose”

This album was fantastic. I had the cassette and it hit me at exactly the right time. Basically it was Duran Duran, stripped of a few members, but was darker and moodier than Duran Duran proper, but with the same voice. Hello Simon. There was even a cameo by Sting and Grace Jones. This album was a move back in time to the sound I originally loved about Duran Duran. I still have it.

In later years I happened across “Duran Duran – Big Thing” and the track “All She Wants Is” blew my mind.

Still later I similarly came across the album “Duran Duran – Thank You” and loved the “911 Is A Joke” and “White Lines”.

Since then, in recent years I have picked up some of the early albums on vinyl. 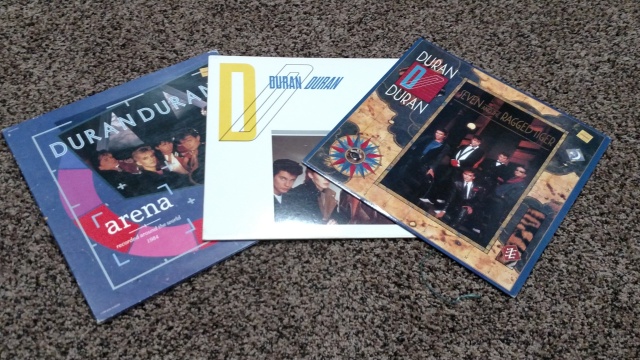 Apparently I have 2 copies of the first album.

Any of my peeps want to fess up to liking Duran Duran? The extra copy is yours.

These are great and I got them all for a buck each. I love you Half Price Books!

This week I hit the library book sale and they had 2 CD’s there between the books. One was “Rush – Moving Pictures”. I have a copy already, but someone will be happy with that. The other I couldn’t read the spine on so I pulled it out. It was Duran Duran. I was gonna toss it back on the shelf because it looked like a newer one, but in tiny letters on the back I saw the song title “All She Wants Is” and I stopped. After inspecting the CD itself and the track listing it was clear that this was a Greatest Hits comp. NOW I was interested. Man, this one has all the great stuff. Sorry, I guess that is redundant, but, some greatest hits packages include songs you don’t really care for because some slice of life loved them and sent sales through the roof, but not necessarily you. I love every song on this CD. It was a great ride to work the next day sampling the 80’s and 90’s through Simon’s voice. “Duran Duran – Decade”. Amazing.

I do have one problem with it though. 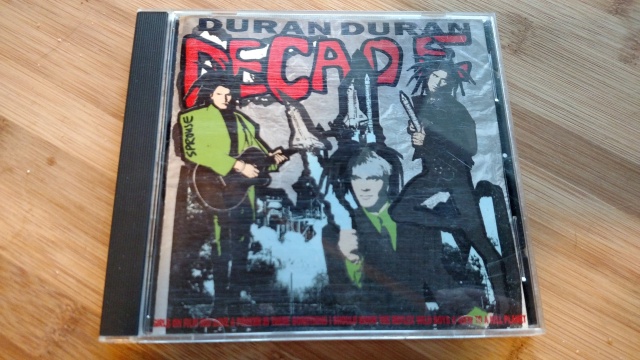 In my humble opinion, this is, in a word: awful.

The artist is Stephen Sprouse, as if you couldn’t tell

and he was an influential artist/designer that has a long history with Duran Duran. I respect that. However. WTF? This is horrible. The inside is no better. I’m sure there is a contingent that thinks this art is a supreme statement of some sort, that it reflects some important influence that is lost on me, or that I just “don’t get”. To me it looks like almost a doodle. This was released in 1989, technically the 80’s still, but seriously.

Also what’s with the Space Shuttle and rockets theme? Is it just sexually charged, or a tribute to the Challenger accident that occurred several years earlier? I don’t get it.

Further there is no mention of the band members inside, no credits except for the art and photos and such. A completely uninspiring almost off-putting package for such a great collection of music. To bad. I’m not saying a better cover would have boosted sales, but it sure didn’t help it any. IMHO.

Don’t tell my high school friends I told you this!