I was surprised to find that a co-worker was in a band and had a CD, and now another co-worker’s band has released a CD.

Tom K. who works at W.K. is in a bluegrass band!

Recently they had their CD release party at High Noon Saloon and unfortunately I wasn’t able to make it, but I did get a signed copy after the show directly from Tom.

“The Soggy Prairie Boys – Just Enough To Feed The Cows” 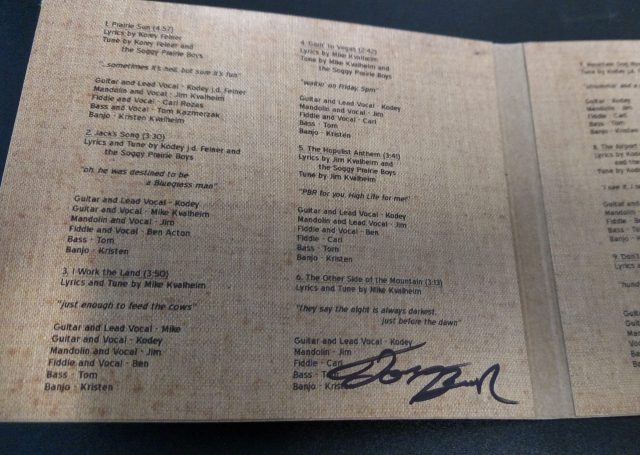 I am an enthusiastic supporter of local music and even though bluegrass music is my normal wheelhouse, I have to say that I was very pleasantly surprised by this CD. It’s really good!

I popped it in on the way home that night, windows rolled down and the sun warm and shining. The opening song “Prairie Sun” was perfect. It put a smile on my face and it set the tone for the whole CD. When the bass kicks in after the intro portion you can’t help but nod your head. It has a great vibe and feel. The track “I Work The Land” contained the line “just enough to feed the cows” which is the name of the CD. It’s a great song.

Throughout I listened carefully to the banjo and picking and the fiddle.

I have to say that I was really taken by the fiddle playing, which is pretty out of character for me, but it was just really good. I silently debated the violin vs fiddle debate in my head. I had to look it up. Here is a quote that sums up the difference.

A Violin Has Four Strings… A Fiddle Has Too!

It’s how you play it that matters.

Another standout track for me was “The Airport Song (Every Other Time)”. This one had a great feel and rhythm to it. Nice heartfelt lyrics to go along with it.

The last track “How Mountain Girls Can Love” is a cover of a Stanley Brothers tune. Great way to end the CD on a high energy uptempo track that sounded fun to record.

I really liked the whole CD and congrats to Tom and the band on a great release.

You can find out about the band, a previous release (Available on I-tunes) and check out the “The Music” tab on their site and watch their bluegrass style version of Adele’s “Hello”. Loved it.