At the show at Lucky’s they didn’t have any signage for his show, just his name on the chalkboard outside.

It’s a small music area, but I have seen other performers have posters there, so I wondered if there was a chance for me to make one for him. I had tried before to make posters for other upcoming shows at Lucky’s and was told that they usually just use what the artist sends them. This time I would contact Brandon directly to see if he wanted to use one.

I wrote him an e-mail and tried to not sound like a weirdo while offering to make a poster for his upcoming Lucky’s show. I enclosed the samples I had made for Lucky’s.

He wrote me back and said that he would be interested. I’m not gonna lie to you, I totally geeked out.

I found some great pictures from his website  brandonbeebe.com  and made 4 possible designs. 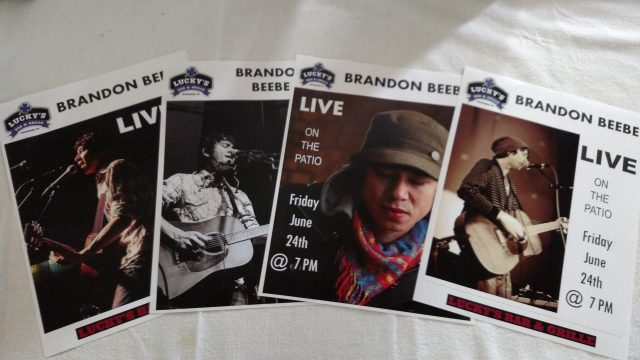 He wrote me back a nice e-mail, selected one, and we refined it through a few more e-mails until we had a finished product.

I had made my first honest to goodness show poster! and I also had a great show to look forward to. I was going to bring my son Joe to this show. I thought he would dig it.

A few weeks before the show Cindy and I stopped out to Lucky’s for lunch and I asked for the manager and handed the posters over and asked them to put them up before the show.

The next week we went back for another meal and they had put up the posters! 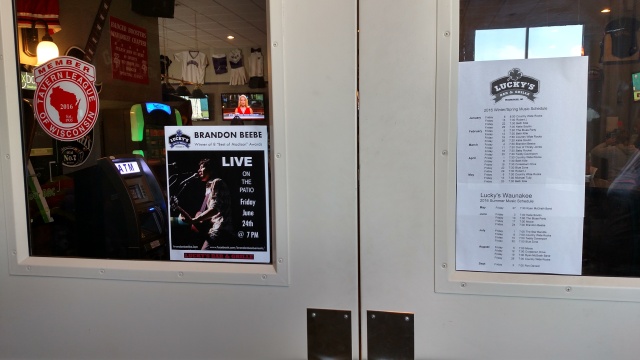 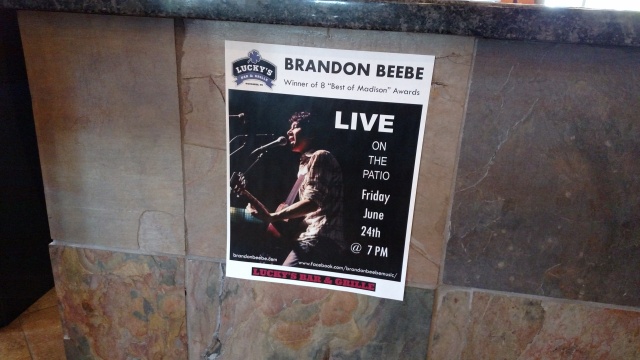 Now I’m not a graphic artist, not a photographer, but here was a poster, like all the zillions I have seen in my life, that was made by ME, hanging up in an actual venue. It was a very proud moment for me.

I wouldn’t have to tear this one down and cradle it lovingly all night fighting to not crumple or bend it and get it home safe. I had extras and I would ask him to sign one of those.

To know that my posters that they hung up were going to be torn down and disposed of the next day didn’t bother me this time. It was a zen moment.

In all the history of show posters…

one was made by The Aural Retentive.