As we were strolling through Target the other day, I was astounded to see in the main aisle, a display of records. A Hendrix album caught my eye and I stopped to have a look. 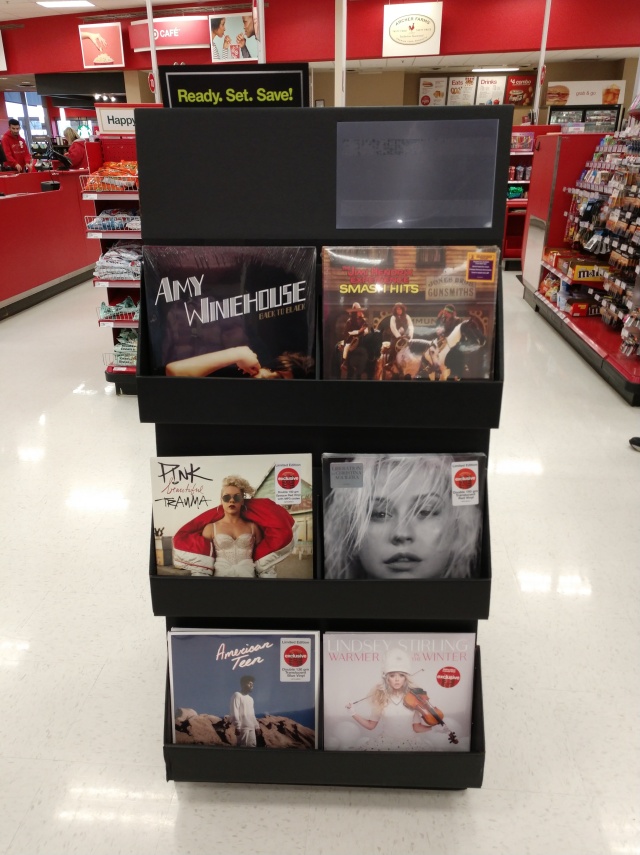 Amy Winehouse, Hendrix and Pink and 3 others I don’t know. Interesting selection. I walked to the back side to have a look there. As I was reviewing them a mother and her 2 kids came walking by and glanced at the display.

I sighed as they stopped to look.

“Uh, these are records.” I told them.

They looked at me, then the records, then shuffled off, clearly disappointed.

As it turns out Target also has a larger record section by the actual music area.

Pink Floyd, Nirvana, Bob Marley, more Hendrix, Fleetwood Mac, Beatles, The Black Keys and Miles Davis. There were also 3 other Led Zeppelin albums behind the front one. Not bad. Though they are all $25.

Again, interesting collection. Beach Boys? Earth Wind and Fire? I am not slighting either band, but are there vinyl collectors clamoring for these? Al Green? If you are old enough to have owned this Al Green album when it came out you probably still have your record player. It’s like they just asked one dude who owns a record player what do you think people will want? Make sure to ask your dad too.

At least you can pick up a record player while you’re there.

Maybe all the record hoopla will end up pushing prices lower.

A guy can dream.