I have detailed the first night in D.C. (Part 1) and The Blues (Part 2) but there were also 2 days of both frantic action and calm downtime.

Saturday we ended up having breakfast at a deli nearby and then grabbing a Lyft into D.C. itself. It was cold but the walking kept us warm while the sun was up. We did some typical stuff like a pic in front of the White House.

Turns out it was taped off for the arrival of someone important.

who landed on the back lawn as we came around the corner towards the Washington Monument. Three came in and 2 peeled off. Security.

After that we headed into the Black History Museum. We went to the top to work our way down. Turns out the top floor has the music section. It was unbelievably cool.

Here is us in front of a video that featured Howlin’ Wolf. Oh yeah.

There was a room that looked like a record store, complete with simulated albums in bins.

There were snippets of all the music in the bins in a computer console table that you could play by pressing them. Very cool. We did a clockwise route through the room which turned out to be the historical through the ages path and ended up seeing the 50’s and 60’s and such amazing stuff as the actual P-Funk Mothership.

Of course we saw Hendrix and James Brown and B.B. King… it was fabulous. I recommend visiting the museum highly. Even I might add after we only saw the 3rd floor. By that time I had stripped off all my layers of coat and sweatshirt and was hot and needed to eat. I felt like it had been a while since breakfast and I needed to eat before I started to have an issue with my blood sugar. I felt bad about having us leave, but “Donger need food!”

As all good tourists do though, first we hit the gift shop. They had CD’s of course, most at a common price, but I was a little saddened to see that these 2 were not representatives of that.

Parliament for $9.99 and Prince for $18.99 ?? Good luck having Prince without first having George Clinton. I toyed with getting a book on Bob Marley, but eventually passed on it.

We got outside and I slowly cooled off and donned my outer layers once more. Then we were off to find food. Turns out, food trucks, of which I have seen a few around Madison and certain events around town… are a thing, a big thing around the D.C. area.

There were several blocks PACKED with these food trucks. Here is an interesting view of the Capital that you don’t see in the history books.

We ordered, I got a quesadilla and fries, and while waiting I tested. I only mention it here because it was a new record for me. I was at 50. My current low up to this point has been in the 60 – 70 range. Surprisingly I didn’t seem overtly affected. I got my food, ate it calmly and we were off again. P.S. the quesadilla was awesome.

Next stop was one of the Smithsonian museums. When Alan and I had come to D.C. as Junior High Students (I think I mistakenly remembered that it was a High School Trip) we split up that day to do separate museums. I went back in the day to the Aerospace museum and loved it, so I declared our destination a return trip for me. This museum makes me think of my father and his love of planes.

They have full size planes hanging everywhere and even the one that he built several times. The Piper Cub. I had to get a shot. 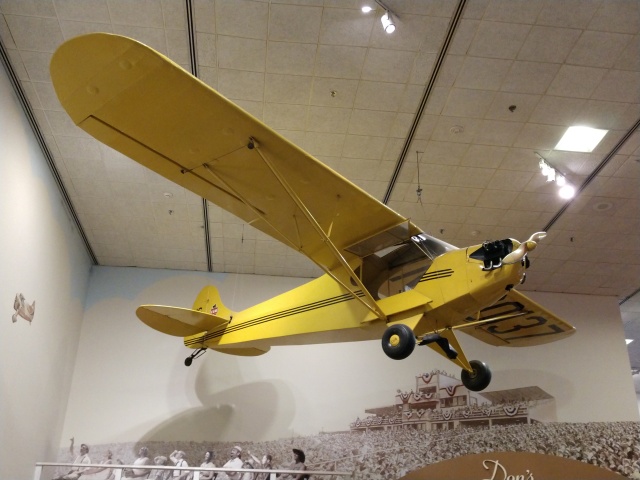 Here is my dad’s which is currently hanging in my garage. 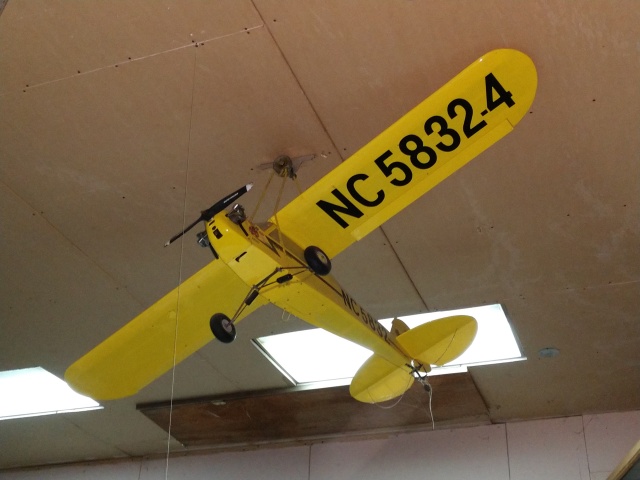 We also saw lots of spacecraft, which I also love.

We spent a fair amount of time in this museum, but eventually meandered outside again in our quest for the Capital. It was a long walk, but we talked and talked along the way. It was truly stupendous to be with Alan and just… well, talk. 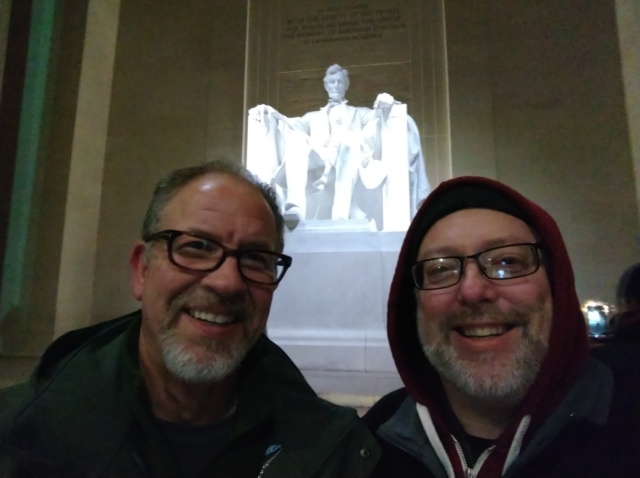 I have been friends with this man since I was, as I said, in Junior High. I moved from Indiana and ended up in Ann Arbor without a friend in the world and this guy took me under his wing and into his circle of friends, and we have remained friends ever since. 40 years! It is always like not a day has passed and for that connection I am eternally grateful.

Once we finally arrived at the Capital

we considered how far we had come and how we were going to get back, get back to where we once belonged.  Lol. That one was for you Alan.

As we had come across D.C. everywhere there were people riding electric scooters. I had seen a documentary on these very same scooters in another city and was curious to try them. It was a bit daunting to get the app downloaded, figure out how to connect to the scooter and enter you license and get set up, but in the end it was a blast.

Note the condition of Alan’s face and ears! He was freezing at that point. We did a bit of a zig zag pattern back across D.C. going from one scooter with a low battery to another. At some points we only had one scooter and Alan ran alongside me. At least it warmed him up. We eventually made it back to where we started and got a Lyft back to the townhouse. It was a L O N G day and I didn’t make it to 4 am that night/overnight. I think at about 1 I called it quits. A day well spent.

Sunday of the trip, we laid low. This day was filled with all the talking that we couldn’t fit into the previous night and day. In the afternoon we broke out the chess board that I brought with me. It had once been Jay’s. Alan’s brother. He gave it to Alan and Alan gave it to me. I thought he would get a kick out of seeing it again.

Turns out, although he claimed he wasn’t, Alan turned out to be a good player, trouncing me the first couple games. 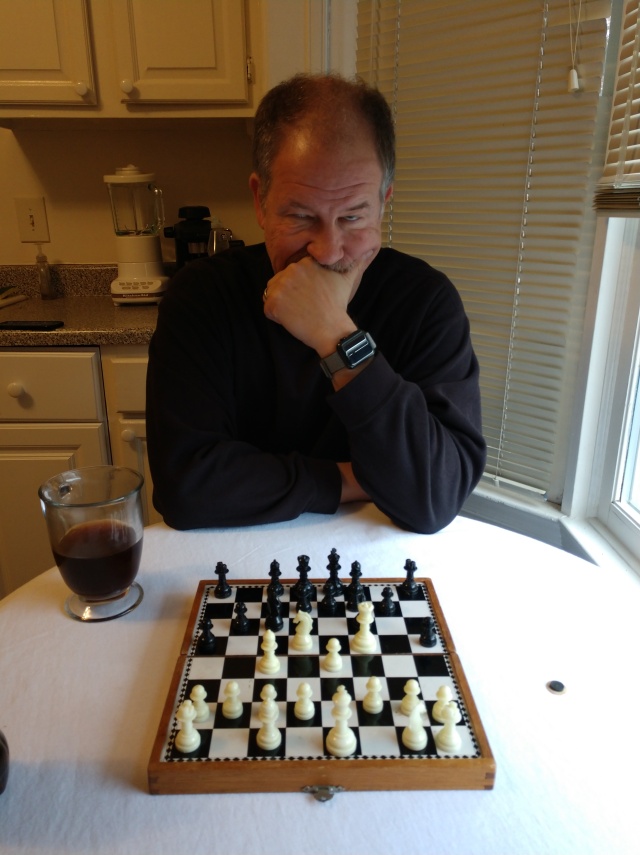 That was his stink face. We spent some time at this bistro table, listening to music (Neil Young was Alan’s first pick) and playing several games. We ended at 3 games all, and I think wisely chose to end things there.

As the evening wound down Alan looked over my digital music and books and put up the gift I had brought for him. Abbey Road vinyl cutouts.

and I wish this picture had come out better, but here it is. 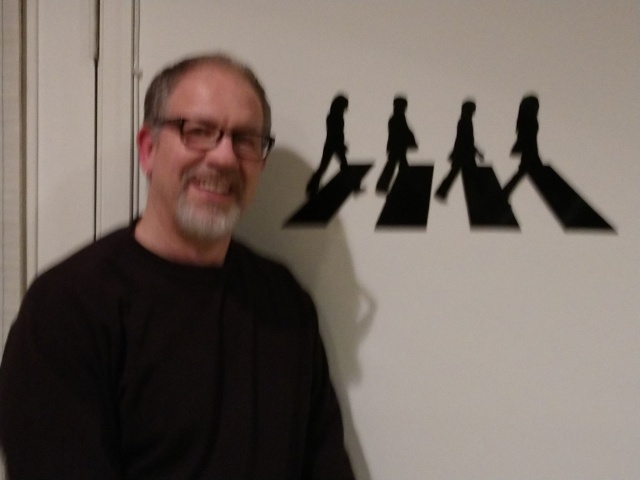 I ended up fighting going to bed, I didn’t want this trip to be over, but I think he may have caught me dozing off on the couch once. Grudgingly, at about 1 we called it and I packed my gear and set up clothes for the next day and passed out.

On the plane the next day I got out my I-Pod and set to crank it up and sleep on the plane, but having used it each night to fall asleep, it was dead. Sigh. I managed somehow. Maybe it was that I had only had a handful of hours of sleep over the last few days.

It was a great trip and I loved every damn minute of it. You have no idea Alan.

Thank you my friend.