I have written about Linda Ronstadt several times on this blog. As a teenager I had posters of her in my room and had several albums. “Simple Dreams” was always a favorite, but as I matured I found myself liking more and more of the older stuff, even back to the Stone Poneys.

In my revived vinyl days when you could find all of her albums for a buck, I purchased every one I could get my hands on.

I can’t say I like everything, she lost me after the 3 Nelson Riddle albums. I couldn’t do the Spanish or Country Western Trio albums, but there is no denying the quality of her voice, even if the music itself wasn’t for me.

I was saddened to hear of her diagnosis of Parkinson’s and the end of her touring. Such a talent. Such a voice.

This past weekend on the TV show Sunday Morning there was a segment on Linda and her history, diagnosis and a short interview. Evidently there was a concert venue sold out recently for a speaking engagement with Linda. She answered questions and spoke about her experiences and life in music. I have no doubt that it was a great evening.

Cindy knows how I feel about Linda and snapped a picture of me watching the segment. 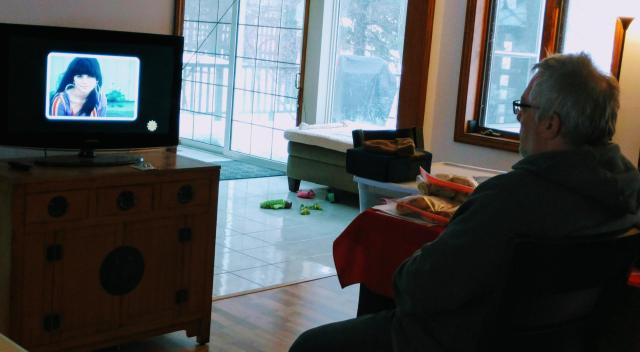 Also noted in the segment was that Linda Ronstadt had a new album out of older live material. It was recorded at the peak of her popularity in the 80’s for a TV show and newly released. This was billed as her first “live” album, though if you purchase vinyl from Germany you are no doubt familiar with…

which I own and have listened to a few times. It’s okay, but has some flaws. Which made me a bit nervous about this new album, but I checked out the song listing and I have to say I could not resist.

The album is “Linda Ronstadt Live In Hollywood”.

I got through the decision to buy pretty quickly, but then had to decide on a format. I currently have all my Linda on vinyl, but post the Sunday Morning show it occurred to me that I don’t have any Linda that I can listen to on the move, so… I decide to go digital on this one and bought it from Amazon as a download.

First let me say that the album is fantastic. Her voice is strong and the music and production is great and the songs she performs are a perfect slice of the time. There are some interesting moments, such as Linda singing part of “Blue Bayou” in Spanish and doing “Faithless Love” as a bit of a duet.

The version of “You’re No Good” is amazing and hands down my favorite track. She belts it out and the vocals shred and the music is sort of stripped down and gritty. There is even a killer bass solo. Typically the music is downplayed to highlight her voice, but they really extend on this song and it is SO good.

A few of the songs are on YouTube, including “You’re No Good”. Check it out!

“How Do I Make You” from the “Mad Love” album is a highlight too. That’s an album I don’t frequent all too often, but forgot how much I love that song. “Desperado” is a great soft and smooth track to round it all out, filled with melancholy and rich peaks and valleys of Linda’s fantastic voice. Never cared much for it done by The Eagles, but Linda makes it shine like a diamond here.

It has it all and is a bit of a Greatest Hits done Live. This is live for sure, but not your huge auditorium event, it seems more intimate, and though you hear the crowd, it is not overpowering and they are respectful during the music and it shouldn’t be distracting even for those of you who are not a fan of crowd noise.

Over all, I would call this album indispensable for Linda Ronstadt fans, casual or not.