A brilliant film with John Cusak as Rob Gordon, record store owner, maker of Top 5 lists and relationship victim with a past full of doomed loves. He relives and revisits his old breakups to try and fix his current one. All of this is set in the backdrop of his life in the record store and the music around him.

I see a lot of myself in Rob and can relate to the characters working for him.

There are SO many things in this movie that stick with me, like this scene that speaks to all record collectors…

Always wished that they had actually cut that track. Sigh.

At any rate, this movie is beloved and untouchable and forever will be.

Fast forward to January 2020 and me seeing a Hulu advertisement for none other than a series based on High Fidelity.

The series stars, ironically, Zoe Kravitz, the daughter of Lisa Bonet and Lenny Kravitz as Rob Gordon. Immediately I was like WHAT?!

It’s like they picked the Bowie music here to try and soften me up a little cause they knew I would be skeptical. Well played Hulu. There is another version of the trailer I found out there.

I don’t know what to do.

Part of me wants to rage hate this as defiling a beloved movie. The other part of me desperately wants this to be good. The Kravitz link is pretty damn genius in my opinion and I think it COULD be good… but I’m scared.

Of course I come at this from a record/music lover angle, so even in stills from the show I am drinking it all in.

Here is a shop scene. 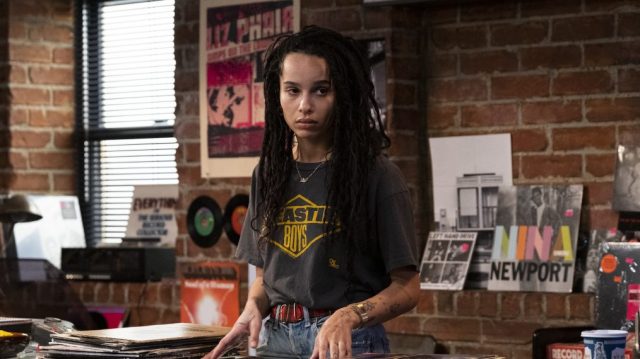 Nina At Newport, Liz Phair poster… Beastie Boys t-shirt. Doubt she will play Beta Band, but I am anxious to see what sorts of items they will feature in the store.

This could go so very wrong. It’s so hard to know if I want them to mirror parts of the movie, or just take the concept and veer off, so that whatever happens is far enough removed that it can’t ruin anything.

I mean making a series from a venerable film like High Fidelity is a bit like making a mix tape, right?

I give you Rob’s own words: