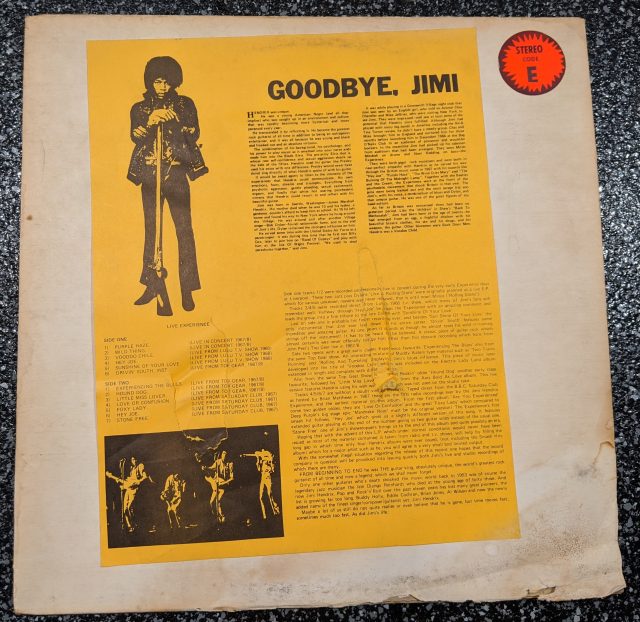 So, when I was younger, and people whispered about imports (meaning of course bootlegs) I had no understanding of what it was all about. I was like, who cares? I didn’t realize what they were exactly. I also couldn’t understand why they were so damn expensive. The covers were crap half the time and they looked old and used.

As time wore on I began to understand.

While writing this I think of my friend Alan who had a “Paul McCartney Live In America” vinyl bootleg album. He played it in the background of a tape that he sent me. He was listening closely for cuts between the songs, which were there. I was not impressed back then. It seemed to me he had bought a rather chopped up copy of “Wings – Across America”. They couldn’t even fade the audience in and out between tracks? I was aghast at the level of production. Alan even sent me a copy of it on cassette at one point and I did play it a lot, but got lost over time. Still, I just didn’t get what the big deal was.

Then came my later years when I DID get it. I got it good.

I found myself not only buying bootlegs (when I could afford it) but trading bootleg tapes AND recording my own bootlegs at local venues of favorite bands. That part of my life swirled for several years until the sheer job of it… listening to rate the recording and cataloging and recording more and dubbing and mailing and writing covers and updating my list… it sucked the fun out of it and I ended up stopping. I cherished the collection I had amassed, but I stepped back from it all.

All this is in preface to the Vinyl Vault selection for this post:

I purchased this vinyl bootleg for $2. Let’s ruminate on that for a moment. $2. 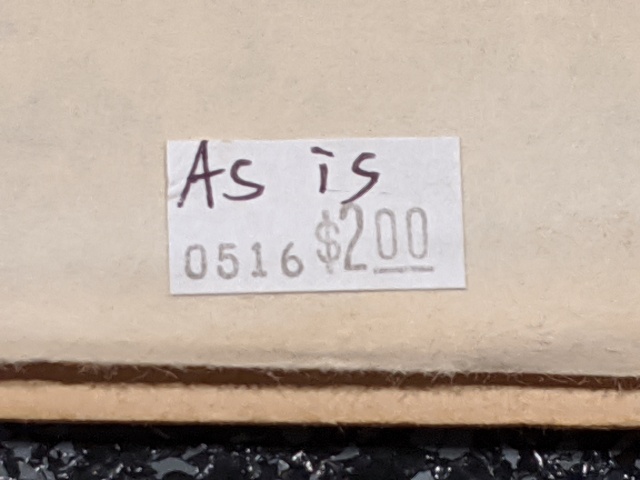 The dreaded “AS IS” sticker.

I had held it, frowned, then put it back. Before I got to the end of the bin though, I pulled it out again. I was in the early stages of decorating the music room and suddenly I had a vision of it in a record frame on the wall, which ultimately is where it ended up.

The glued on paper “liner notes”? are ripped but readable, and the cardboard sleeve is water damaged and falling apart in the corner. 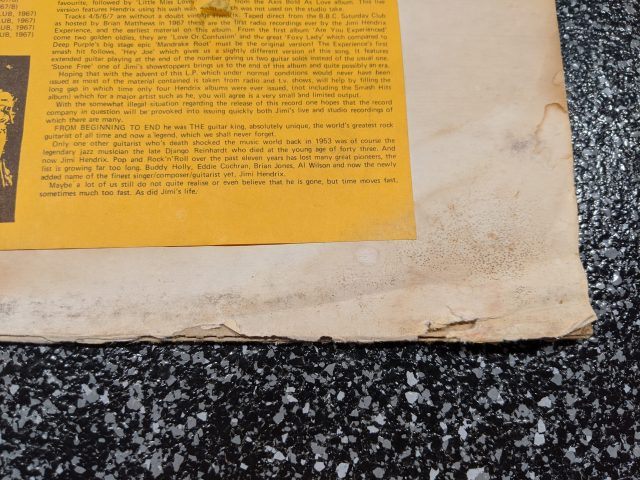 The paper sleeve was the last bastion of defense for the vinyl itself which was on Kustom Records. The label indicates “Live Experience 1967-68”.

A quick Google search revealed there are 3 versions of this vinyl.

So, the big reveal was getting it home and playing the album. Sigh. “As Is” was unfortunately a very apt notice.

The sound was NOT soundboard. The sound was not even a warm audience recording. This album turns out to be a somewhat poor recordings of some radio/TV performances.

I had excitedly started with Side Two since I didn’t know the song “Experiencing The Blues”. As with a lot of Hendrix bootlegs, this turned out to be bait song. The bait song is a track that they intentionally misname so that collectors think, exactly like I did… “OH! A song I have never heard before!”

Whomp whomp. It turns out to be a version of “Catfish Blues”. Further, there are 2 skips in the song and I gave up on it.

I was forced to admit that it was just a $2 bootleg and I put it on the wall. It was worth it for a decoration and it hung on the wall for years.

I know that it’s likely barely worth the 2 dollars spent on it, but damn it, I still think it’s cool. I do NOT regret buying it.

Then I decided to write about it and took it down and ran it through the record cleaner that I had purchased well after I had purchased this album. I ran it through and cleaned the crap out of it. Did it clean it and improve the sound and remove the skips, thus making it suddenly valuable and a collectors item??!!

However, the skips no longer stick the track and repeat endlessly and the needle just bounces forward. Jarring, but better. There are 3 of these such “jump” spots and later on Side 2 a stuck track skip still exists. Side 1 however, which I had never listened to until now actually plays through with no skips at all and the sound is better. Overall, I would say that it is improved and I am even more delighted than ever that I dropped 2 big ones on it.

It will go back on the wall as a decoration, but now I know that it will play in a pinch. If this BBC style show is you favorite era of Jimi Hendrix, I recommend the now officially released album of the same material called “Jimi Hendrix – BBC Sessions”

These bootlegs are a little slice of history, and come in all types of quality and packaging. These days they are likely traded digitally and the era of vinyl boots is probably dead, but this is one cheap, old, ragged piece that I couldn’t pass up.