Yeah, I had pre-ordered the vinyl version and have avoided hearing it until my vinyl arrived. It’s HERE!

This is the Loser Edition 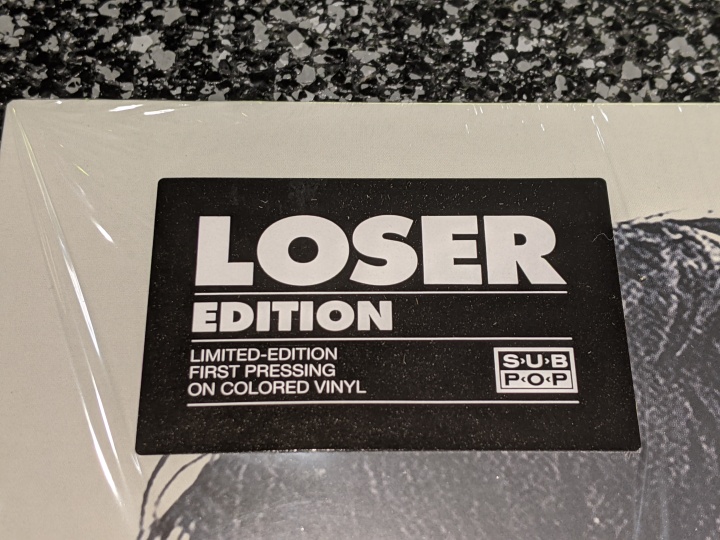 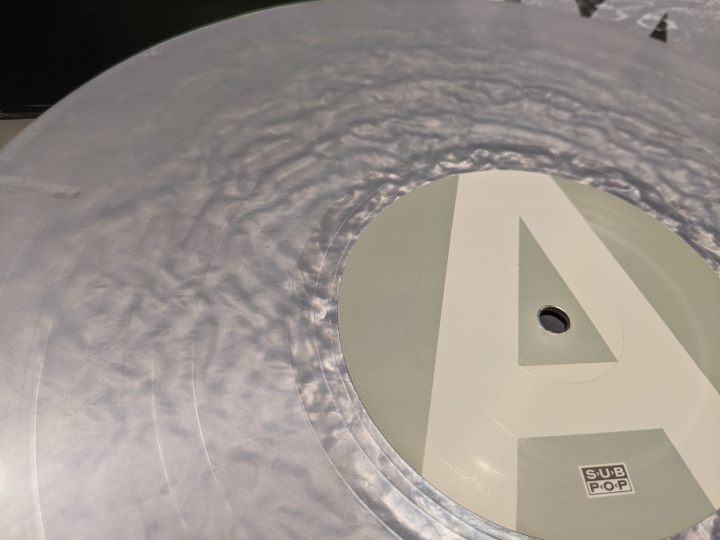 with bonus swirls and streaks that are visible against the light.

Plus stickers and a large poster to boot. I love the extras! Sub Pop is a great label.

And, as a last feaure, METZ is embossed on the cover. It’s hard to see in this shot, but you can see the M and the light is on top of the E.

So, it’s packaged awesome and I’m glad to have it in my collection, but what about the music?…

Are you familiar with METZ? If not check out their KEXP performance. You’ll either love it or hate it in the first 35 seconds.

For those of you who are familiar and picked up METZ last album release “Automat” you may be hesitant. “Automat” was a collection of singles that are sometimes hard to come by and available only here and there. It’s a great collection to have, but to be fair, it’s not the first METZ album you are going to break out at a party. Even METZ themselves agree it was a challenging listen. So what would this new album be like?

I saw METZ live when they toured with their album “Strange Peace” and it was amazing. In my top 10 shows of all time? Hands down Yes!

The frenzied energy and music was a complete spectacle and I am SO glad I went. Remember that show Otis!?

So I had heard that “Atlas Vending” was a return to form, so I was at least hopeful that there would be more accessible tracks. They were not wrong. Also, the vocals are more up front in the mix which if you know me is a thing. Here is the track listing:

I’m no Rolling Stone writer with delicate and pithy prose with which to describe the music on this album, but I can tell you that it is simply amazing. These songs are catchy and fierce and rhythmic and when I listen to this it reminds me of their first album and I’m ecstatic about that. I know Sub Pop is a little biased, but here is their article on the album. I hesitate to suggest you watch the video, I’m afraid it will only detract from the song, but, your presumably a savvy consumer of music and are aware of the fact that a bizarre or awful video is hard to forget in conjunction to a song you used to like.

You can find all 3 pre-release tracks on Spotify (and the interwebs) from the album that should convince you of the direction they are taking and the sound they are achieving. They are “Blind Youth Industrial Park”, “Hail Taxi” and “A Boat To Drown In”. You can’t go wrong with any of those tracks.