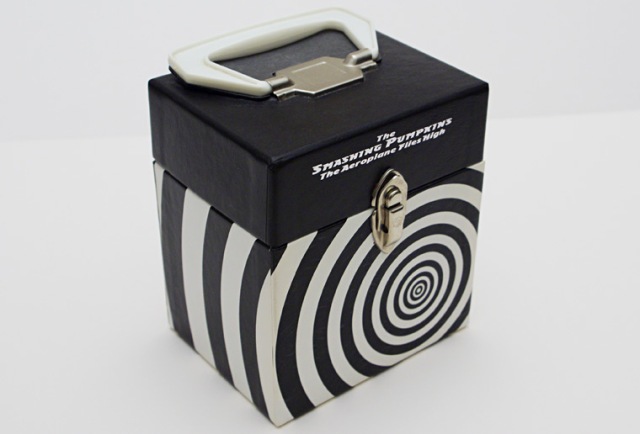 So in the early days when I was embracing the Smashing Pumpkins I shelled out the bread for the CD Single Box Set called “The Aeroplane Flies High”. It was amazing. I really didn’t know what was in store for me I didn’t really know what was included, but I was blown away by the tracks found within. Essentially it is a collection of singles and demos and B-sides from “Melancholy And The Infinite Sadness”. There were amazing covers and acoustic tracks and the crazy nearly 23 minute long “Pistachio Medley” which is a collection of riffs and snippets. For fans of that track there is a breakdown of all the individual pieces.

There is so much great stuff on these 5 CD’s. I cleared a place on the shelf near the stereo to display this proudly.

When I eventually bought the album “Adore” a notion struck me. I liked the slow Pumpkins songs as much as the rockin’ out tracks. So I put together a collection of songs call “Quiet Smash”. I pulled all the slow tracks from all the albums I had thus far. There are 3 songs from “The Aeroplane Flies High” in my “Quiet Smash” collection. I played this endlessly.

Taking a tip from another site “A Frankie View” (thanks Frankie!) I created this as a Spotify playlist that you can access here:

Which is why I don’t understand myself. For some reason, thinking just having “The Aeroplane Flies High” MP3’s was enough and that I didn’t need to own this physical item. I eventually sold it and spent a long time satisfied with such a nonsense decision.

In Half Price Books pre-pandemic I saw it on display and had my first pangs of regret. They wanted $50 for it (which turned out was not 100% unreasonable) but I was still trying to convince myself that owning it was redundant. I passed on it.

Recently I have discovered that there is a Deluxe MP3 Edition with 90 tracks and over 6 hours of music. Lots of live stuff and demos added. Though the package has it’s ups and downs if Pitchfork is to be believed.

What cemented my need for this black and white box from my past was a sighting of it on a TV show “New Girl” we are binging on Netflix. See it over her shoulder? I literally jumped up off the couch and made my wife back it up and pause it so I could get this shot.

I started searching it out on E-bay. It was there alright. Priced from 50 to 100 consistently. Ugh. I created an alert and watched as they kept getting posted and I put my finger on the bid button a few times, but held back. Then someone posted it for a paltry $5.99 a week ago and I did bid, but got beat by like 50 flippin’ cents in the last 3 seconds. Grr….

Finally I managed to score it for $29 plus shipping! It’s not mint, but it looks to be in good shape and has the booklet with it! 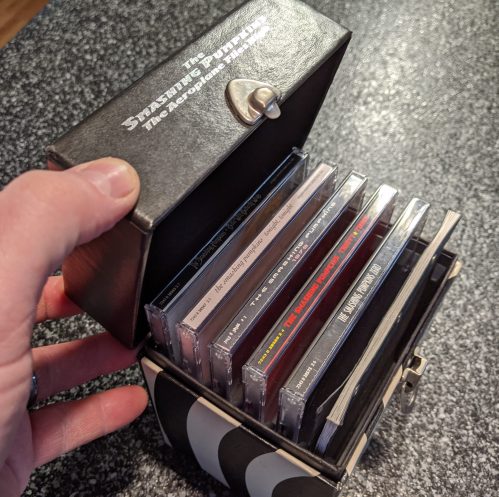 I know this was a nostalgia purchase, and that I could have lived without it, but I am glad to have it back in my collection. Items like this are fading into obscurity in this digital age. It’s fun to own oddities and weird one offs when you can get a hold of them.