Fair Warning. Largely useless info about The Smashing Pumpkins below.

Lately I have picked up both new and old Smashing Pumpkins albums. I had pre-ordered “Cyr” and I also got “Adore” and “Pisces Iscariot” recently. More on those later, but suffice it to say, I have been Pumpkin-ing out for a few weeks.

This led me to look back at the post I wrote about seeing the Smashing Pumpkins in 2018, a dream come true.

Which led me to see if any further songs from that night had been posted to YouTube, which led me to this amazing video from August of that same year.

This was a show they did that was broadcast on Live Nation that someone recorded. It’s fantastic. Hope it still exists when your reading this and the link still works. There is an opening segment with lots of animations of Smashing Pumpkins imagery from various albums that culminates with twins dressed like the girls on “Siamese Dream” coming out and using a sort of flame thrower to set a metal Smashing Pumpkins logo on fire.

Pretty sure I would have lost it if I was at that show. Regardless… the whole show is great and at one point they do a cover of “Stairway To Heaven”.

If you are a casual Pumpkins fan, you may only know the radio hits, or tracks from the main albums, but there are plenty of odd covers that have been recorded and languish out there to be found. That got me thinking about all the tracks I have squirreled away in a folder that I spent ridiculous amounts of hours getting from Napster and such pockets of the internet. That got me thinking about all my bootleg tapes in a box in the basement.

I suddenly remembered having one Smashing Pumpkins bootleg tape. I got it from a guy that had a couple CD bootlegs that he got from another guy and we got to talking one day at the factory and he mentioned he had that and a Grateful Dead bootleg CD. I thought I had found a local source for more bootlegs(!), but after we discussed for a bit it was clear he was not really a collector, but just had a couple that he had picked up randomly from friends. Regardless, he let me borrow and record them.

Keep in mind, since that day I have amassed a huge collection of Pumpkins boots. There are tons out on the Internet Archive for you wanting to jump in.

but it was one particular song on this one bootleg tape I had that I was thinking about. One song I didn’t remember the exact title of, but I knew was not an album track. I also suspected that I would be able to find it online now and may be even better sound quality.

As an aside here, I always found it a bit ironic that these bootleg tapes that I found SO precious were really just copies of copies of copies. They felt like solid gold in my hands every time I got one… but soon a little thing called the internet rendered them back to their sad copy/copy/copy state and they suddenly became relics of an analog past.

To the basement I went though, because of the that one song, hoping it was still in the box. I needed to find it and figure out what that song was, and perhaps find a better copy to replace my tape, from YouTube or some other site. Since the 90’s when I got this tape, there is a good chance it has been uploaded somewhere. 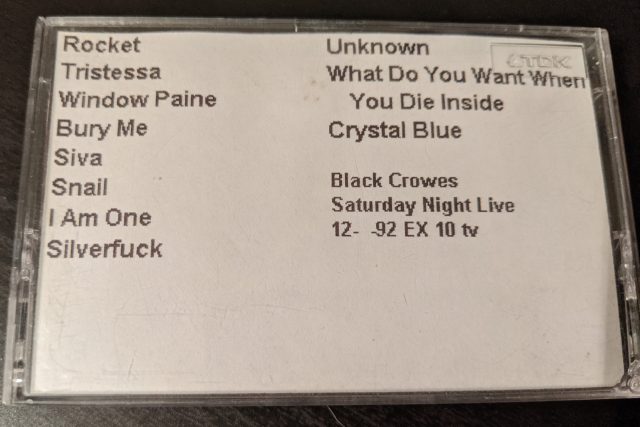 So there was an Unknown song, and the one that I was recalling (which I think was a fairly long song) labeled as “What Do You Want When You Die Inside”. So really 2 mysteries to be solved.

The surprise was on the back where I add any extra info. Offramp Cafe, Seattle WA and the name of the CD: “Virgins”. 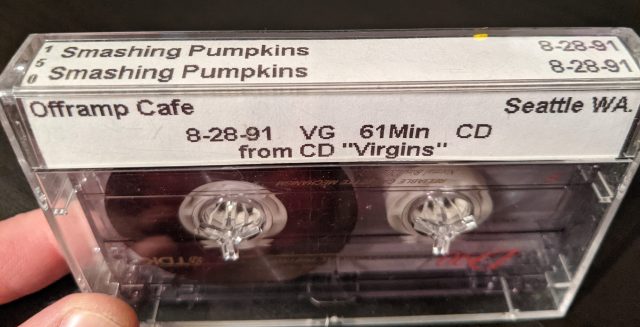 SO! That was certainly something to go on in my internet investigations. It took about 24 seconds to find this:

The notes made things even more confusing.

Clearly “What Do You Want” and “When You Die Inside” are not separate songs. So I needed to see the back cover of the CD to see how this happened. The place to do that was Discogs! They had a pic of the CD back.

So, I guess I can see how this may have gotten confused, but there is a bullet between each song. So the song really is “What Do You Want When You Die Inside”. I thought that that brought the matter to a close… but… what is up with the notes in Discogs?? 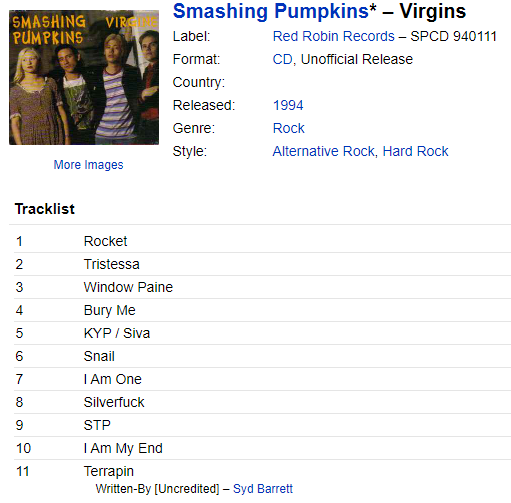 Wait. Hold on. There are notes below.

So now I don’t know what to believe. However armed with this new information about the venue and date I did another YouTube search and found this.

The notes from this upload say the following:

This seems to be more definitive at least. Finally I took to the internet once more for a tie breaker. I found this on The Smashing Pumpkins Wiki. Probably should have thought of this first, but I didn’t think it would be this hard. The SPCODEX has everything about this show of course, including stage banter. THAT is thorough.

Don’t worry, the track listed “Kill Your Parents” is really just extended banter, but for each song you can click the song hyperlink and get all the facts about it. They have appeared on other bootlegs and I think we can definitely say that the songs are “STP” “I Am My End” and “Terrapin”.

Speaking of banter, here is the banter list for the show.

So in conclusion, after a search in the basement for the tape itself, and several internet searches, I can finally put this to bed. My tape is labelled wrong, I accept that now. Hard to believe that someone at Red Robin Records who produced and distributed the “Virgins” CD didn’t do proper research on the track list, but there it is.

My tape is now not only redundant, but wrong to boot (no pun intended).

Nevertheless, I am returning it to the basement.