Somewhere in the late 80’s I discovered tape dubbing. Having a tape deck was a necessity for tape trading. The record player became secondary. I also added a CD player, for which I paid the criminally insane price of 300 dollars. That was what you had to pay back then to have advanced equipment. Plus I bought the only one Penny’s had. I bought a CD-Man about a few years later that I could hook to my stereo with a 12 dollar cord. Who knew? I loved my CD player anyway. It had a feature on it that was worth top dollar. There was an “A” button you could hit at the start of a section of music you wanted to repeat and a “B” button to indicate the end and it would repeat that A – B section until you stopped it. Yeah, that’s right. Top quality.

In the picture here you can see the entertainment center that went through ultimately 3 moves and was around for like 15 years before ultimately being sent out to pasture. Note for those of you that read “Equipment – Circa 1983” that the speakers you see are still the same ones. Probably beyond 10 years old at this point.

The record player sits on the low shelf, with a double sided tape case… held like 60 tapes. AWE-some. Then came the Onkyo receiver. It had a remote the size of a small paperback and I never did learn what all the buttons were for. On top of that was the auto reversing, high speed dubbing double cassette deck. This tape deck is still on my stereo shelf NOW, though it has finally died. It ate my “Jimi Hendrix – Midnight Lightning” tape (some might say fitting for a finished in the studio with studio musicians record) and then stopped working altogether. RIP. Then the CD player. Above that an equalizer. Hell ya. An equalizer. That I still DO have that and it works!

That’s Max about to try and pull the Christmas tree over on himself.

Here is a different angle of the equipment later that year. Go TOM! Get him!

In a saddening and sudden puff of white smoke that Onkyo receiver died a few years later. It was replace as evidenced by the photo below by a silver and poorly matching receiver the likes of which I do not even recall what brand. It worked okay and the front was lit up with multi-colors and the tabs you touched/pushed to change functions glowed blue and made a good nightlight. Note the equalizer is not in the stack. I have no idea why. The tape case is also missing. It could be that by this time my tape trading was in full swing and I had taken to storing them all in the basement on a rack. Or they could just be in the cabinet with the doors. My stereo sort of overtook our entertainment center. 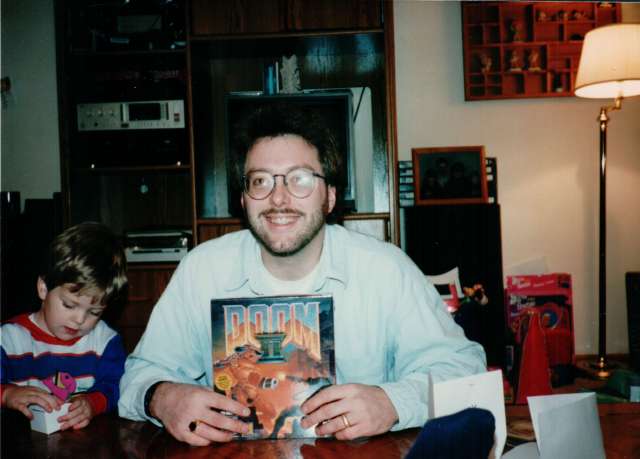