Since my cassette deck died I have of course had a renewed interest in my tapes. I still have a lot of tapes. Mostly bootleg tapes. The majority now live in this box, a Dell computer box recovered from work for storage. 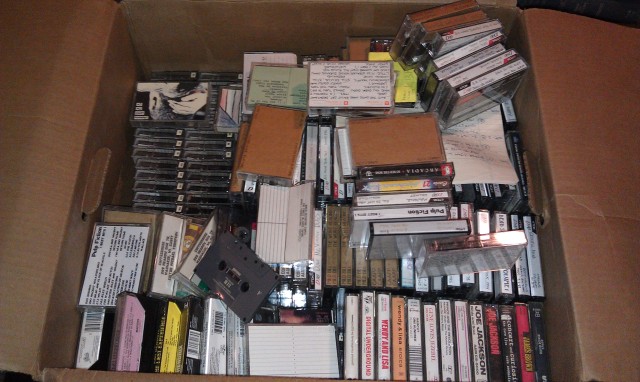 There are 2 layers of tapes in this box. In the top right hand corner I removed a portion of the upper layer so you could see the lower layer. See the tapes with the tiny white stickers on them? Those stickers are numbers. These are my bootleg tapes. The entire bottom layer of the box is bootlegs, like 150 of them, and that quantity is nothing compared to most of the people I traded with back in the day.

Each bootleg has a number assigned to it so that I could keep track of them with a spreadsheet. Some of the tapes have a full show and then some small 10-15 minute bits from TV shows or small recorded performances that are from a whole different artist than the main show on the tape. It became quite a task to keep them organized and rated and keep track of what was coming in and going out and frankly, that is what made me stop in the end. It became too much like work. I was spending so much time processing and dubbing and cataloging that I stopped LISTENING to them. Besides, eventually I discovered legit ways to get live shows (FurtherNet and Live Music Archive) and I got to have them in digital too. If you are a jam band fan, do yourself a favor and check those sites out. There is a ton of great music out there from bands that allow taping of their shows. I have gotten many good Grateful Dead and Smashing Pumpkins shows from LMA.

The rest of the tapes in this magical box are generally purchased tapes and manually dubbed versions of albums. There are a few special compilations that Dalton and I made, or copies of radio shows. There is even a copy of the audio to the movie Pulp Fiction which I painstakingly recorded with a tape deck and VCR.

There is a lot of history in this box. It was in here that I pulled out the Buddy Guy live show from R & R Station that I finally put into digital format. I know there are more gems in here that I haven’t listened to in ages. While taking the picture I noticed my repurchased copy of Haircut 100 – Pelican West.

I guess I should go through them and get rid of what I have already replaced with the equivalent CD and digitize the irreplaceable compilations and one of a kinds.

I wonder if Goodwill or St. Vincent DePaul even takes tapes anymore?

Someone surely still needs the Maxi Cassette Single of “Madonna – Justify My Love”!