So I loaded my van with a double handful of tapes from the Magic Box. Yesterday I listened to a compilation of club music I had copied from various sources. Some songs were still good; some seemed like a poor joke on myself from 20 years ago. I remember listening to it back in the day and dancing around the townhouse with Abbey as a little girl. This was music from the Sentry clubbing days. It was a fun time, but the music hasn’t aged very well. I noted the songs I wanted to download from Amazon: “Snap – Marry Had A Little Boy” and “C+C Music Factory – Gonna Make You Sweat (Everybody Dance Now” and the rest, bye bye. One tape down, a few hundred to go.

On the morning of day 2 I put in Dead Or Alive – Youthquake. This was one of the tapes I listened to from the Bayshore days. This very one actually. I had just ordered it the other night from Amazon in a fit of 80’s nostalgia after writing my Bayshore Days post. The start of the tape was a bit wah wah for a minute, but by the time the chorus came, and even Joey recognized it, the sound was good. He has the You Spin Me Round song on his I-Pod, but the Manson version. Kids.

Anyway, after dropping Joey at school I stopped at the grocery store for a second. When I got back in the van and the tape fired up again… the sound was a mess! It was in and out and sounded like it was getting eaten. I popped it out and back in but it was no good. A cursory check revealed the issue. The little felt pad that holds the tape against the tape head had fallen off. It was still in the cassette, but not attached to the tiny metal strip that holds it in place. I also noticed that this tape had been in a scrape before. There was scotch tape covering one corner of the tape. I seem to recall that once or twice the tape had come out and got caught in the crack and stopped, luckily before it broke. I covered the spot so the tape wouldn’t get caught on anything. So now, it was without a pad and still cracked. Sigh… 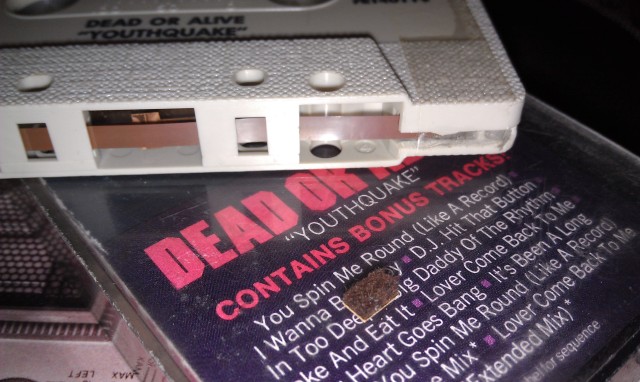 I tossed it in the garbage at my desk at work.

It was about 10 minutes before I pulled it out again. I brought it home. I couldn’t help it.

Back in the day I had an entire box the size of a check box full of cassette pieces. I had tiny metal pad holders, take up spindles, tiny screws and a few strips of blank tape to add to the beginning of piece of tape if it broke. Over the years I had quite a few tapes break on me. A lot of times when rewinding, the tape would just snap off of the tiny take up reel. That was an easy fix. Take out the screws, remove the plastic tape spool protectors, take the notch filler out of the take up reel, put the end of the tape back in and replace the notch and rebuild. I was ready for anything. Store bought tapes were more difficult to work with because they didn’t have screws to take out so you could get to the insides. You had to basically break the tape open, dissect it, and rebuild it into a spare cassette body. I used primarily TDK tapes. Cheap but good quality, and they had screws for just such an emergency. If this had been 20 years ago, and I had not just purchased the CD I would have operated.

As it happens, that night, a box from Amazon was waiting for me with, among other things, the CD of “Dead Or Alive – Youthquake”. The tape did have 2 bonus songs that are not included on the CD, but I can live without the Extended Versions. 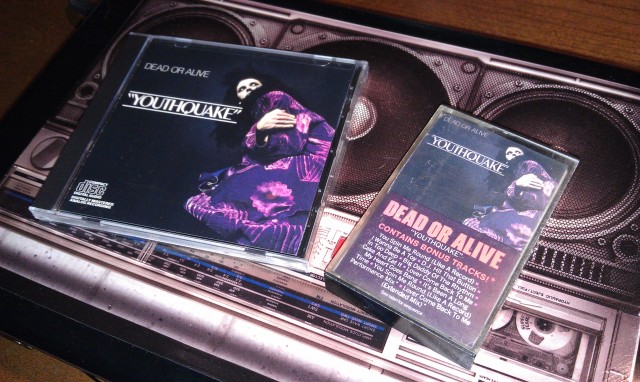 You were a good tape.

Thanks for the memories.