One of the relics Dalton and I loved to get after seeing a band was the telephone pole promotional poster.

This was usually stapled to a (you guessed it) telephone pole, or sometimes bulletin boards around town. Just a flyer for the band with show info. After the show we would grab one for our collections and memory files.

I have posted this one before, but it deserves a place here. 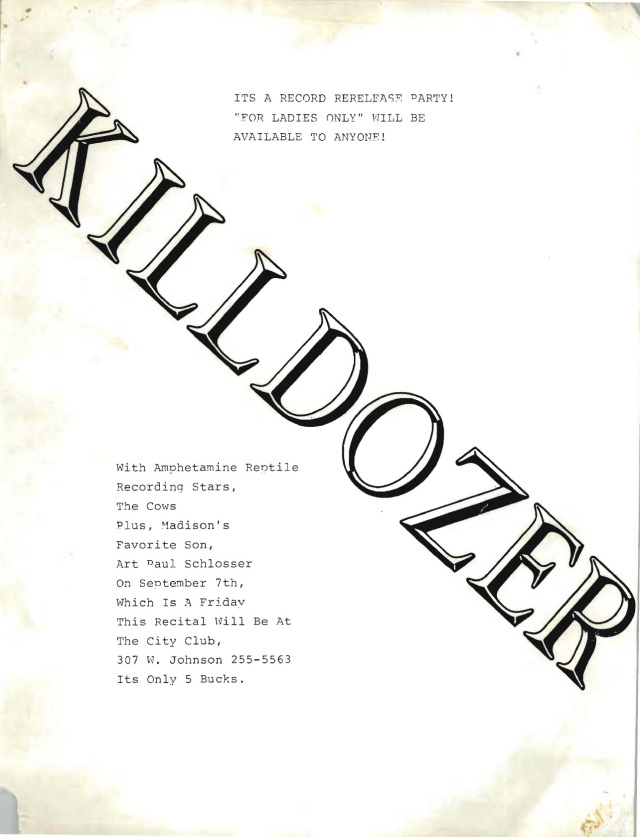 Pretty damn plain. Probably knocked out in about 5 minutes on someone’s PC. That’s okay though. It got Dalton’s attention and we went to the show. It was awesome.

Another local group that went big that we saw was Poopshovel. I saw them with Dalton at some point and he still has this flyer from them. Now this is not the particular show that I saw, but I loved this one and had to include it.

I did recover from a different Poopshovel show another show relic that we prized back in the day. The Set List.

It looks like there was debate over the set list and the order was changed. Interesting piece of history. Or not. It is cool though. Isn’t it?

Couch Flambeau was a band that I stumbled on while at UW Milwaukee. I got a copy of their “Couch Flambeau – Mammal Insect Marriage” LP and thought it was hysterical. It was funny and musical and I passed it on to several of my more open minded music friends of the day. Eventually I went to see them a few times in Milwaukee. They were awesome. I even have a very early bootleg attempt that captured 2 songs from The Kenwood Inn in 1993. Another where I recorded the whole show has vanished over time. Too bad, it was a great show. The guys I went with were fluent with Couch and you could hear us shouting out song requests. That tape is missed. Insert sad face here.

This show I did attend and it was great. Cattle Prod was good, not all opening bands are, and Couch Flambeau was better and funnier than ever. The crowd was into it and we had great spots at O’Cayz to both see and record the show. We stood on benches against the wall on the left side of the bar. So we were above the crowd and could see great and the sound was clear without being muffled by all the bodies. My trusty bootleg rig with the big silver microphone reorded this show and it is one on my all time favorites.

They came back the next year!

We met Jay Tiller and Neil Socol at the bar before the show and I presented them with a copy of my tape of last years show, with the 2 Kenwood Inn songs at the end of the tape. I woner if they ever listened to that. It was the thought that counts right? They were probably just scared we were stalkers. I can’t recall if it was the first or the second O’Kayz show, but I did get a pick that Jay said he had specially made. I keep it in a plastic cassette case, but included it in this picture of some buttons and my NIN sticker. You can see it in the lower center. It says “Jay’s Fucking Pick”. Classic.

Another thing we pulled off of a telephone pole was this flyer for a Hendrix film biography. I didn’t get to go see this, but I love the flyer.

Hendrix! Oh man, don’t get me started. That’s for another time.