For the life of me I can’t recall how I came to own “Johnny Winter – Second Winter”. 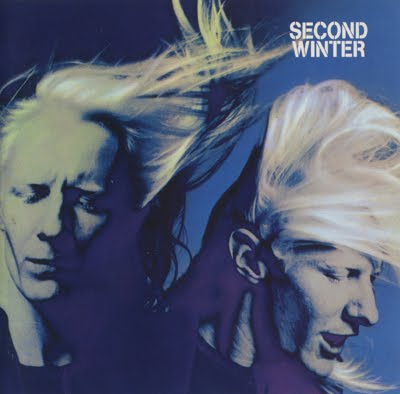 It was released in 1969 so I didn’t buy it new. I seem to recall owning it when I lived in Roselle. This makes sense as I was still buying vinyl in those days. I want to say that I owned this before I hit my blues phase and didn’t really know this as blues, though it certainly was. I didn’t hear anything like this on the radio at the time, even the covers sounded so different that the whole album seemed like music from a secret society. I wanted in. I didn’t know then that Johnny Winter played with Muddy Waters. I didn’t make that connection until I got the “Muddy and The Wolf” tape from the used record store many years later in Sun Prairie, which officially marked the “Blues” period of my life. When I saw Johnny’s name in the credits I was like… wow, Johnny Winter! I had the “Second Winter” vinyl and loved it to death, but never replaced it for some reason until now.

I bought it on Amazon last night. It was $8.99 but I used a TDS Customer Reward good for $40 in Amazon credits. Thank you TDS. You bought me Johnny Winter.

The reason for the renewed interest came from the old compilation tape I made of blues songs from the Friday and Saturday night blues programs on WORT a Madison radio station. I recently digitized the tape and was listening to the MP3 at work. “Boogie and Blues – Volume 1” starts side B with the DJ explaining that he couldn’t find the “Johnny Winter – Second Winter” LP in their collection to play a callers request. That caller was me requesting “Memory Pain”. He did play another Johnny Winter song though and that talk and the subsequent track made it onto the tape.

That got me thinking about “Second Winter” again and how great it was, and why didn’t I still have it?!

I played it on Grooveshark and I was amazed that it actually sounded as good as I remembered it. “Memory Pain” is tremendous. When Johnny sings “serves me right to suffer…” it reminds me of “The J. Geils Band – Live Full House” and their cover of “Serves You Right To Suffer” an old John Lee Hooker tune. Another blues song that I was exposed to and didn’t really even realize it. That album lives in my memory at about the same time… the vinyl days: Ann Arbor – Roselle.

I recall that I had known who Edgar Winter was… everyone knew “Frankenstein”. Maybe I got this by mistake. It could have been in the bins at Meyers Super Store in Ann Arbor, and I got it thinking I was getting Edgar Winter. Who knows.

However I picked it up… it was a great accidental find. I know I had never heard any of these songs before. In that sense it was a whole new trip down a kind of music that I was soon going to be into in a big way. The blue cover and double picture of Johnny with his wild albino hair being blown around was memorable. The songs really hit me at the right time and the right place. I was in that dabbling perios of my life where I was open to almost anything musically as long as it stirred me. This sure did.Also of note, though the album was a gatefold with 2 LP’s it wasn’t a double album. How can that be? It was a 3 sided album. The first LP was normal and the second LP was full on one side and blank on the other. No grooves. At first I thought someone in the factory was asleep at the wheel, but this was as it was intended. I had had a single sided 45 in my day, but never this. Hmm… not sure that production technique; the 3 sided LP, ever took off.

A brief Wikipedia search revealed this:

There are only a few examples of a sesquialbum (i.e. one and a half records). Johnny Winter released what would be the first three-sided rock album Second Winter on two 12-inch discs, with the flip side of the second disc being blank.

So, sesquialbum. Johnny was the first and I had had it. Interesting. Wish I still had that vinyl. Ah well.

Now it’s on my phone, which I jacked into my minivan cassette adapter this morning and jammed.

“Memory Pain” is an unrelenting classic. “I’m Not Sure” has an awesome groove. “Miss Ann” and “I Love Everybody” are classics and the drums in “Fast Life Rider” knocked my socks off. Even the 50’s remakes “Slippin’ and Slidin’”  and “Johnny B. Goode” Johnny’s guitar makes shine here.

If you have any intention of getting some Johnny Winter, make “Second Winter” your first.