Once when I was in Las Vegas sitting at a Mandalay Bay slot machine there was a commotion and a man came through surrounded by a group of folks. He stopped in an open area between the tables and the machine I was on and took a couple pictures with people. His back was to me at first, then I got a look at his face and the huge white clock he had around his neck. It was Flavor Flav!

Now I can’t pretend I am a huge Public Enemy fan (though I do like some) but there is no mistaking Flavor Flav. I grabbed out my phone and got this.

Then he was gone.

I know, that could be anybody. I really can’t prove it, but if I was going to make it up I am not sure that Flavor Flav is the celebrity/musician I would highlight.

That being said, a very unusual situation happened recently that I just had to note here.

Last year, before I started this blog I went to a benefit event for a co-worker. Our friends Deb and Brett were also a part of the benefit. Bret, who worked for MMI (Madison Media Institute) at the time, was able to ask someone he was working with at the school, who was working/teaching there, to be a part of the event. In fact, he was asked to emcee the event. This person was someone who was in the music industry. He was funny and did a great job and was an amazing presence. Most people there probably had no idea who he was, however I did. I was taking some pictures for the event, so I was able to take some pics that I wouldn’t have normally if I had just seen him on the street. Eventually I straight up asked for a picture with him. 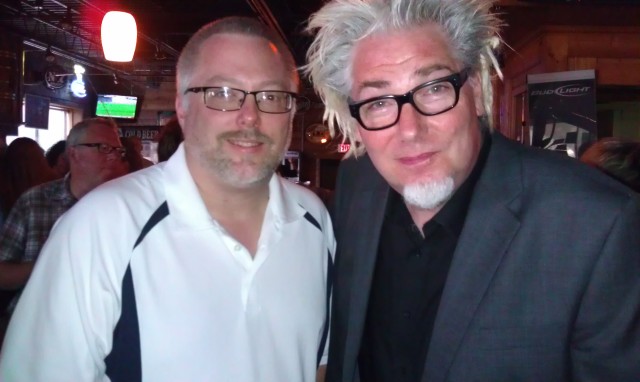 He is Martin Atkins!

His Wiki:   http://en.wikipedia.org/wiki/Martin_Atkins      He has his own Wiki!

The article mentions MMI, his book and all the bands that he has played for and lead. These are bands that I know: PIL and NIN and Killing Joke and Pigface. This guy is an awesome drummer for several famous (in my world at the very least) bands!

Pigface originally wrote and performed the song “Suck” that Trent later covered and released with the “Nine Inch Nails – Broken” CD. It was on a mini disc, featured on this blog before that also included a cover of the song “Physical” by Adam Ant. Dalton got a hold of the Pigface version of “Suck” and we included it on our NIN mixes. I had to dig out my video DVD that Dalton put together for me of NIN videos to watch “Head Like A Hole” that he appears in.

Public Image Limited (PIL) was almost responsible for Abbey’s name. For a long time the song “Analisa” was burned into my brain and was a potential for baby names. Marty (do you think I can call him that?) wasn’t playing for them at that time, but does appear on later albums.

So, Marty has been around.

During a recent dinner out with Deb and Bret, we discussed wedding planning and DJ’s came up. Conversation ensued and before I knew it Bret was offering to ask Martin Atkins, with whom he still talks, to see if he would be interested in DJ’ing the wedding. My “star goggles” took over and I said “yeah, of course” to that. A former PIL and Ministry and NIN drummer DJ’ing our wedding?! Why not? Sure! That would be cool right?!

Well, eventually I came to my senses and realized that though it would be cool for me, it might not be for everyone else, and that a regular DJ would be more appropriate. I mean how could I not request Pigface’s “Suck” on the wedding day? Would he play the chicken dance. Would we be limited to what was on his I-Pod? Since he is not a DJ by profession, he probably would need us to rent all the equipment. Sigh. In essence I guess it would be like asking Alice Cooper to babysit, or Bowie to do landscaping at the house.

Just not the right fit for us. I got a hold of Bret and called it off. There is no telling if he would have even considered doing some strangers wedding in the first place anyway. I’m not sure I could have handled a turn down from Marty anyway.

On the upside, I know someone who could ask Martin Atkins to DJ my wedding.

Thanks Bret, the offer was appreciated.