So the show was great. Hands down. 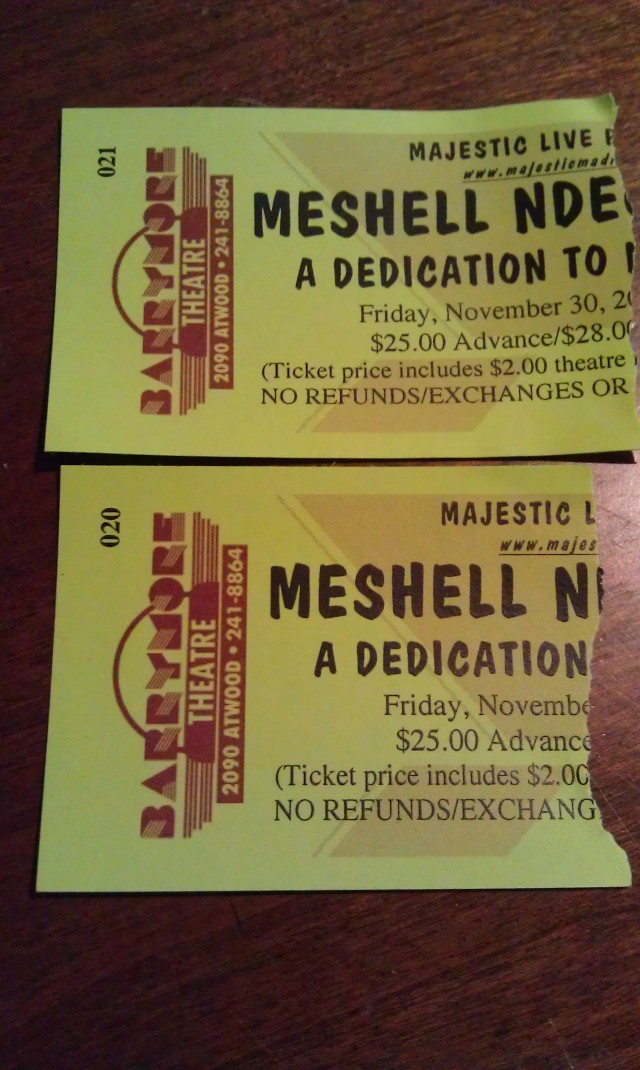 First of all, we had great seats. There were 3 rows of folding chairs down front, then the theater seats behind that. There was extra room between. So we sat in the first row of theater seats. Plenty of room to spread out. 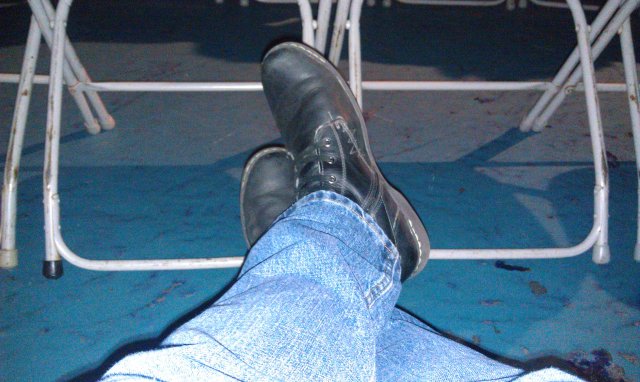 Brandon Beebe, the opener, came out and played a song with his band. He had a female violinist, a guy playing stand up bass (sorry, can’t see him in this shot) and a guy playing tambourine, the shakers and singing a bit of backup. 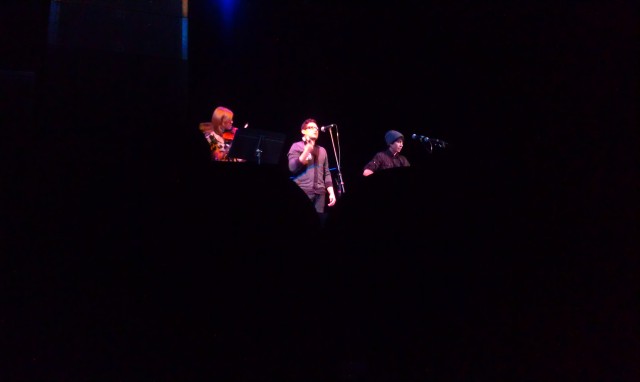 I wasn’t sure what to expect. Anytime I see a violin onstage I worry. However, the first song was pretty good.

The second song was even better.

The third song was awe-some.

Brandon had a unique (at least for me) setup. He had some sort of sample recorders at his feet and would build himself a backing band. For the the third song he picked up a bass and just slapped it to create a percussion beat and recorded it with a foot pedal. Then he set that on repeat. He put down the bass and returned to the record mic and did hand claps. Then he had beat and claps repeating. Then he added tambourine. Then he added a little wooden percussion block. With all that repeating and grooving for us, then he picked up his acoustic and fired off a couple riffs and added them in. Then he joined this stream with singing and it sounded like a whole band with just him onstage. The rest of the group had stepped off.

When I first realized what he was doing I have to say, for a moment I was like “really?”… but he did it so well and he was pulling these samples live. If he was just pressing a preprogrammed button for his sounds I might have remained put off, but in truth I really liked it. What’s more, he didn’t just let all the sounds repeat through the whole song, he started and stopped parts of them at different times almost like he was using the sampler as a whole other instrument. The applause at the end of that song was strong.

Then the band came back out. The rest of the songs were a combination of the band and Brandon using his sampler to build the sound, including melody vocals. 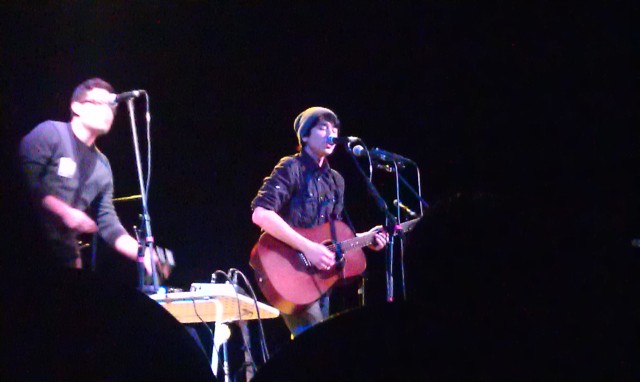 I have to say I enjoyed Brandon Beebe very much.

I just bought it.

Then there was a stage breakdown as they set up for Meshell.

I snuck a quick picture of the empty stage. 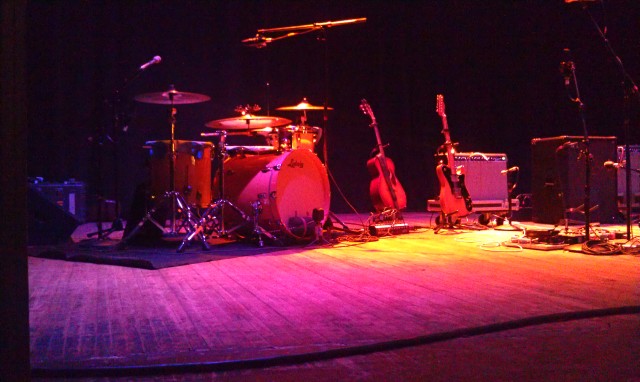 Meshell came out wearing a full length dashiki style dress and picked up the bass. 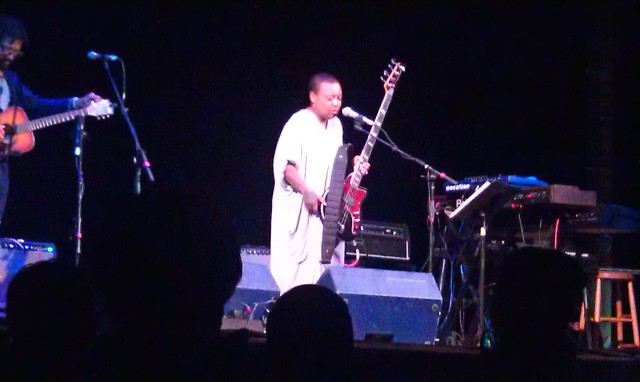 Then she gave a nod to the drummer and he started a mercilessly pounding beat that lead them into the first song. It was surprising, I was expecting a soft smooth sound, but good. Meshell was grooving and the guitarist (a huge man playing an underized acoustic guitar) was riffing hard. The keyboardist was laying down some weird sounds that tied it all together.

After the first song, Meshell addressed the crowd. Her voice was soft and almost apologetic as she talked for a moment about Nina Simone. A few sound adjustment requests and then right back into it.

I recognized most of the songs, but she did her own thing to them. Some were happy, some were sad, and some had a tone that was almost ominous. There was a point in almost every song where Meshell would step back from the mic and start grooving hard with the rhythm and close her eyes and bounce and tip while she was playing. The sound would flow like a wave, all the instruments building into a wave, with the bass moving you like it was physical.

She did a version of See Line Woman, not my favorite Nina song, but I can still hear Meshell’s version in my head now. It was so good. They really went into the voodoo groove on that one, the keyboard player was adding treatments that sounded like Nine Inch Nails sounds and it seemed like the hard groove went on and on and on until we were all in a trance, then she slowed it down and brought it to a close so softly you almost forgot you were in a groove coma. It was amazing. 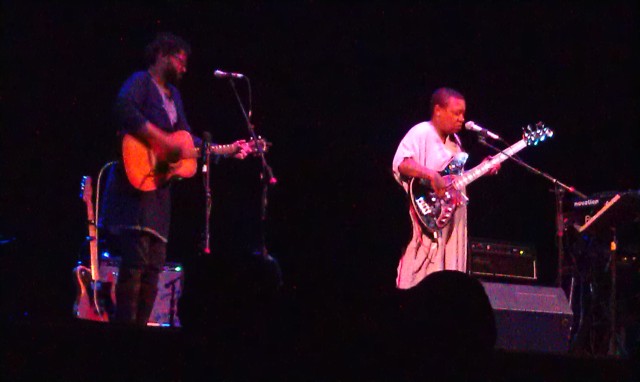 I was surprised at how soft spoken she was. Her voice in the songs was strong at times, yet soft and smooth throughout most. Several times she asked if we were doing okay.

The crowd was quiet and respectful, cheering and whooping when they recognized a song, then falling silent to listen. It was a great show. I would definitely see her again if she comes back around. 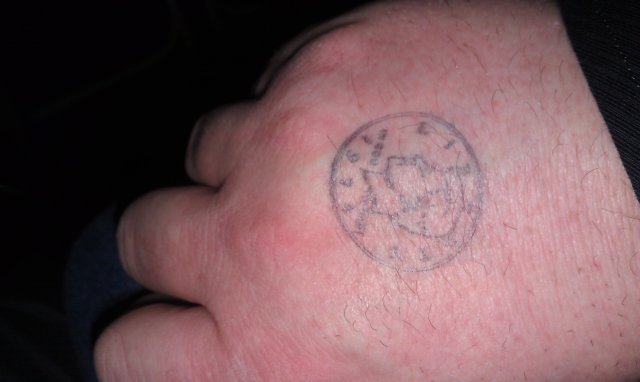 The evening was a huge success.

It occurred to me also, as a matter of history, that not only was this Cindy and my first ticketed music show together, that it’s probably the first live music I have seen since NIN at Summerfest years and years and years ago.

Back in the game!