When I lived with my mom in Brown Deer, we had the cable channel Showtime. I felt cutting edge, and we got MTV!

In the first wave of cable movies I watched was one called  “Repo Man”. It starred Emilio Estevez and was a weird movie about a dead-end kid that ended up befriending a group of repo men and becoming one himself. It was campy and off the wall, but I loved it.

The soundtrack was amazing, and it turned me on to several new bands. For the life of me I do not know where I got a hold of it, but I got it, and dubbed it and made a cover for it that was just black with typewriter white out strip for the text.

Simple. No fuss. I still have this tape. TDK rules!

I listened to this tape constantly when I worked at The Wisconsin Cheeseman, working on the shipping/receiving dock and while picking orders.

There were classics on here: “TV Party – Black Flag”, which spurred my venture into some early Black Flag punk. I didn’t even know who Henry Rollins was at that point. This fueled my short-lived stick it to the man phase. The few people I knew who knew Black Flag thought that Black Flag was a good place to start, but “listen to this man”… and they loaned me growler and barker bands that were mainly unintelligible and made me think twice about who I hung out with at work. I still like Black Flag though.

Of course the soundtrack also featured “Institutionalized – Suicidal Tendencies”. This song was on tons of compilations I made, again and again. Pure awesome. “All I wanted was a Pepsi” became a piece of Dalton and my language together.  One could argue that this has a bit of the growler in it as well, but it is well contained and not the entire song.

Iggy Pop was on here and I investigated him deeply. Finding his close connection to Bowie cemented him in my world. Iggy does the theme song for the movie, “Repo Man”.

“Pablo Picasso – Burning Sensation” was an undeniable groove. I would play it for anyone that would listen. It also made it to many a compilation. It’s so matter of fact and bass heavy.

I also loved the Circle Jerks song “When The Shit Hits The Fan”. It is done in a goofy, mock slow band style, not like their normal sound, which is represented by “Coup D’Etat” on the soundtrack. You gotta love this one. Reminds me of Richard Cheese covering a Circle Jerk’s song. Classic, funny stuff that really works.

I came across this in one of the free newsprint mags that get given out for free around town. 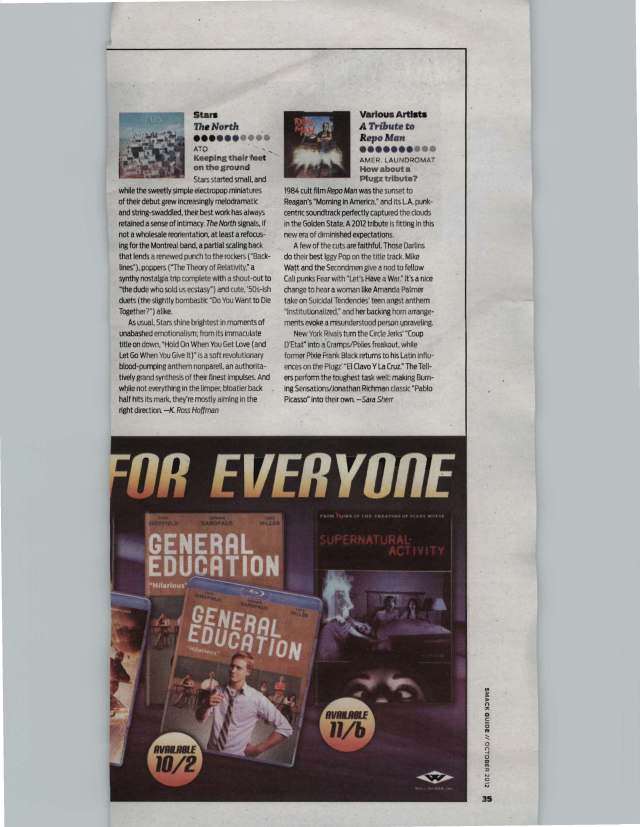 There are some soundtracks that never make a mark at all in the public eye.

I mean no one is remaking the soundtrack to “Flash”, the one done by Queen, which permanently stopped me from buying any more Queen albums. So, to have it reworked by new artists 28 years later…

Seems I was onto something back then.

“Put your seatbelt on, boy. I don’t ride with anybody ‘less they wear their seatbelt. It’s one of my rules.”