During the time I was staying in the dorms at UW Milwaukee, I was poor.

I accepted that, but suddenly I had new friends and new music to listen to and got hooked on a lot of new bands and artists, but couldn’t afford to buy hardly any new stuff. I was destitute. The few tapes I had I started scavenging for tapes to erase and use for making tapes to my friend Jeff and I often had to sit down and make decisions on dubbed tapes that I owned as to whether they were of less import than an album I wanted to record from a friend. This was tough.

Paul Beck had all the George Thorogood, and Anton had Kate Bush and I had very few expendable tapes. It didn’t take long for most of the tapes I had to be re-recorded several times. I even recorded over some of the store-bought tapes I had. I put a piece of masking tape over the imprinted album name printed on the tape itself and scribbled on what I had recorded  onto it. Ugly. It was a desperate and dark time in my life. So much music to record and so few tapes.

I think during this phase I even sold some records at the used place to buy tapes to record more music on. It was a vicious cycle.

And then I hit the lottery. Not literally, but to me, in a way almost as valuable…

I worked as a “Security Guard” at the library at UWM for work study. I spent the first hour of my shift sitting at the desk though which all patrons had to exit. This was between the checkout desk and the doors to the outside. If someone beeped as they went through the gate that electronically scanned them and their checked out materials I got to say “Can you please go back to the checkout desk and have them see what was not properly checked out, thank you”. This happened rarely, so I got a LOT of reading time in. You were not allowed to do homework, but you could read. I would get Fantasy and Science Fiction (the digest magazine that the library subscribed to and hard bound at the end of each year) and enjoy some daily reading time.

The second hour of my shift I had to walk around the library and look for people sleeping (who I had to wake up) and people with sodas (who I had to ask to toss them out, or leave with them). When I walked into the main area of the periodicals area, there was an almost audible buzz as people hid stuff in their bags and nudged their friends as I approached. I walked the library about twice during my hour. It wasn’t my favorite part of the job, but I did get to know the people who worked in all the areas of the library.

Then back to the desk for an hour, repeating for my whole shift.

The library became my second home, squeezing shifts in between classes and hanging out there in the AV area study carrels. Something like this 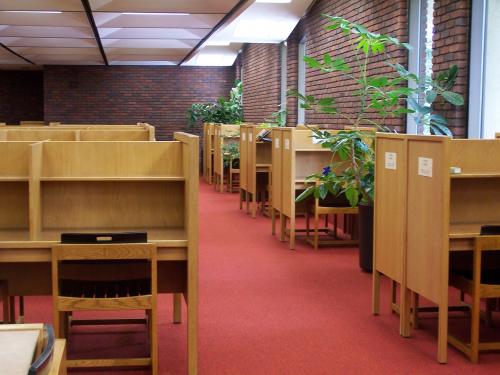 It was a weird setup with headphones available in each and music available to be pumped in via a central console of tape decks and a few turntables behind the AV counter. So you would look up something in the card catalog that you wanted to listen to, take it to the AV counter and they would find it, put it in the tape deck, and connect the output to the appropriate study carrel feed and then you could go and study and listen to music. It was a complicated setup, but was nice for a break sometimes. The girl who worked the AV area most days was on my security route, so we became familiar without ever really knowing each other. When I came in and my batteries for my Walkman died I sometimes had some music pumped to my carrel. They had very few rock albums, but there were a couple. Bob Dylan, Rolling Stones… and some Creedence Clearwater Revival were about all I could find.

One day, I strode in and waved to the girl and took up residence in a carrel in the back corner. I wasn’t working, just killing an hour before my 4 hour stretch of afternoon classes. I spread out, pulled out the Walkman and adjusted my yellow sport headphones and clicked play. Nothing. Sigh…

I decided I would have some Stones pumped to me and headed to the AV desk. That’s when it happened. Just as I approached, the girl behind the counter tossed a cassette tape into a rolling garbage barrel. It was half full already with tapes. Easily hundreds of tapes were in this barrel. When I asked what was up the girl told me that they were finishing a project wherein they were re-recording and re-labelling all the tapes that they had in house. They did this every so many years due to wear. I was flabbergasted. I asked what they do with the old tapes. To my horror she told me they throw them out, that this barrel was in fact the last of the project, and that there were 2 barrels like this in the dumpster already, she was just cataloging the last of them to be thrown away. Arrrrgggg!!!   No!!!!!!!

I explained to her how I made tapes to my friend Jeff and that even if the quality wasn’t top notch that they would work for that purpose, if nothing else. She was like, uh… do you want some? I ran and got my backpack emptied it in the study carrel and went back to the desk. We filled my backpack with probably 150 tapes. There weren’t any cases, just the tapes themselves. She explained that it was probably uncool for her to give me these and that she needed to get the rest cataloged and the barrel down to the dock where they would dump it in the dumpster. Her shift was over in like 15 minutes. My timing was perfect. In my head I ran the clock and figured I had just enough time to get these back to the dorms dump them, load my books that I would have to carry back into my bag and get to class. I barely made it. My plan was to come back later when it was dark and dare I say it, dumpster dive. It was going to be more tapes than I could carry. I would be like Scrooge McDuck swimming in his pool of gold coins.

However, when it came time for the undercover of darkness mission, it turned out that the dumpsters were empty. Apparently they had come during the day at some point and emptied them. I shook my fist at the sky and cursed my luck. I never got any more.

I did end up though with about 150 tapes from the backpack run.

These tapes were Scotch brand, 60 minutes each and after I tried a couple, I couldn’t find anything wrong with them. They didn’t seem worn out. The labels were mind bogglingly complex classical titles. 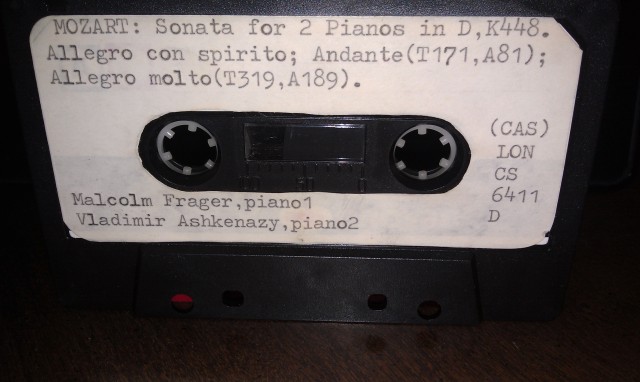 I would have hated to be the one who had to type all these out.

The first tape I made from these as a test was a dub of the April Wine albums that Paul had. All the best songs from “April Wine – Nature Of The Beast” and “April Wine – Power Play” made an awesome 60 minute mix. I listened to it on the way to work that night and I didn’t hear any issues.

I made a pattern of a tape label and used paper grocery bags to make new ones. A fine point Flair pen was my tool of choice for writing these labels. This was the precursor to Brown Bag Records.

Then I made a tape for Jeff on one of the library tapes. No issues with that one either.

So I had a ton of tapes all of a sudden.

I began recording everything I could get my hands on that I had been wanting to record from my friends. I would record everything, then listen to it on my Walkman, noting if the album was a keeper or if I needed to make a compilation out of the ones I recorded. AC/DC was like this. Paul had all the AC/DC and I recorded all the early Bon Scott albums, but afterwards decided that a comp would be better, so I used my 2 tape decks to record the songs from the full length album tapes onto a blank. When I was done I put the full length album tapes into a pile to be used again.

Clearly I was after quantity over quality.

I got AC/DC from Paul, Kate Bush from Anton, and Elvis Costello from someone across the hall from us. I went looking for anyone who had the Rush albums I was missing and found a guy down the hall who had them all. I spent a whole night after class recording these from LP’s and it was the first time I had heard “Rush – Permanent Waves” all the way through. I remember sitting on the floor, my stereo under my loft bed and writing down all the song titles on the tiny label.

I was in heaven and those tapes seemed to last forever. The only limit I had was in finding out who had what and asking politely if I could borrow it to record it. No one told me no. I recorded like 50 albums in a month.

The only issue I really had was that I ran out of boxes to put the tapes in. I had a few extra plastic boxes with blank j-cards, but they were soon used up and so the tapes were just stacked everywhere. Finding the one I wanted, since they all looked alike, same color plastic and same color label, was an issue.

There were worse problems to have. I counted my blessings.

I was even turned on to some opera (Figaro) and some excellent violin (Sibelius) music from these tapes.

Over the years some of these tapes broke (I guess they did wear out) and some were lost, some got used to make more Jeff tapes… most got tossed (again) during the time when I snubbed my nose at tapes and bought stuff on CD. I only have a couple of them left, which I will now keep for nostalgia sake.

I have always been glad at any rate that I was in the right place at the right time to smuggle these tapes out of the library and expand my collection for those few glorious months. The time I spent in the dorms and in the house on Summit Avenue was filled with new and exciting music on a pretty constant rotation. I always carried a big handful in my backpack for walking to and playing at East Side Foods, and for playing on the Walkman on the way to class and while studying on campus.

It was the golden age of the Library Tape.