It occurred to me in a flash the other day that there was a potential source of used records that I had not been to. Half Price Books – Eastside.

It has been many years since I have been in that one, I hardly ever go to the Eastside, and I can’t believe I forgot to check it out.

I called first to see that they actually had records. I was told yes.

So I headed to the Eastside.

I was suspecting that the selection would be somewhat the same as the Westside Half Price Books, but I had seen what a difference there was in the “Discount” section between Appleton and Madison Half Price Books – Westside, so I had a little hope. 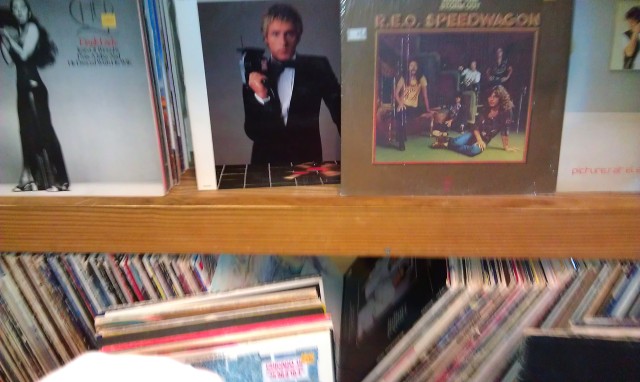 As the “Discount” shelf in both stores is basically on the floor, the best way to go through them, in my humble opinion, is to pull out batches and flip through them.

Chicago, Eagles, R.E.O Speedwagon, Phil Collins… they have almost every one. Of course they have Air Supply too. Frankly though, the wretched stuff is in a much lower proportion to the good stuff here. I started amassing a pile halfway through the lower “Discount” shelf. Then I went back across the upper section. More gold there! I found a couple doubles of things I wanted, so when I reached the end of the upper section I took my accumulated pile to an area at the end to the record section and set the pile on the Video Discs (people still buy those) to sort them out. I put back some Billy Squire and some Neil Diamond that I suspected were just greatest hits from certain label years. I checked which doubles looked best, swapped out some inserts and reached my final decision on what to keep. Then I glanced down. The end of the rack was a continuation of the “Discount” section!

At that point I had probably been there over half an hour squatting or straight up sitting on the floor. This end section was not as big, but could I leave it unsearched? I set in on it with the mind set that if I didn’t find anything good within the first half of the lower section I would quit.

When I reached the end of the upper and lower section of the end, I leaned slowly around the corner. There was MORE along the long side opposite the first “Discount” section I searched. I couldn’t believe my eyes. For a moment I considered, with legs now cramping, sweating from too many layers of sweatshirt and coat, and the area being narrow with carts in the aisle, coming back another day to tackle the 3rd “Discount” section, but having found so much good stuff so far, I just couldn’t.

I worked my way into the confined aisle and started pulling piles. More gold was uncovered in that 3rd section. My pile was bigger than on any other record shopping trip yet. I ran through the pile again for impulse items and removed a couple. Then I strode to the checkout and headed home with my pile riding shotgun.

Once home I realized that one album I bought, I already had. One album I had bought 2 copies of, one with a bad inside cover and the copy that I picked to replace it in the pile, but forgot to remove the bad one. I also had an album that I thought I had, and only bought because it had a unique cover that I didn’t think I had on the copy I had. When I got home I discovered that I DIDN’T own it. Whew. I’m glad I bought that one.

I’ve only been buying records since summer but already I have enough that I can’t be sure of what I have! Ugh. Time to make a list I guess.

Well, with the haul from Half Price Books Eastside, I think I have cleaned out all the obvious used record stashes in the area.

**** Update, Otis clued me in on this:  http://madcitymusic.net/   Used records! It looks like they have listeneing stations as well. Nice. May have to check it out. Thanks Otis! ****