I returned to The Frugal Muse the day after scoring the Led Zeppelin albums to trade in some books and pick up the rest of the albums I had wanted but reluctantly left behind.

They were still hidden there where I had left them. I got them and a gift certificate for the rest. That means I will have to go back at SOME point to use the rest of my credit.

For now, I rescued the following. 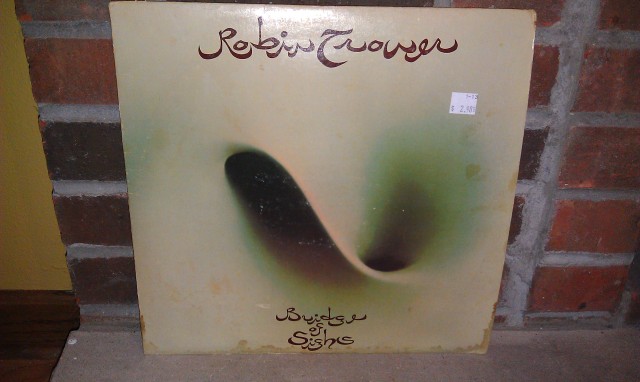 At some point I had this on tape. I LOVED it. “Day Of The Eagle” ? OMG. This was one of those guitar giants that was just before my time. At least they were popular before I was into rock like this. I liken Robin Trower to the same club as Pat Travers and Jeff Beck and Rory Gallagher… great guitarists that you never see a face to go with. This whole album, EVEN the slow songs are fantastic. I was like “Where has Robin Trower been all my life?!” Based on how much I loved this tape I bought a cut-out tape of “Robin Trower – Beyond The Mist”. I was stoked to get this to the tape deck, but when the vocals started I was confused? This is not Robin Trower! Actually, it was Dave Bronze singing. The singer on “Robin Trower – Bridge Of Sighs” is James Dewar. Joke was on me. Robin Trower doesn’t sing. I never was able to get past the voice thing. It always seemed off to me no matter how good the music was. I went back to “Bridge Of Sighs” and the “Beyond The Mist” tape disappeared over time.

Then one day I was given a Robin Trower tape by a friend who thought it was too acid trippy and didn’t care for live stuff anyway. The album?

I have a tremendous respect for Robin Trower, and I LOVE LOVE LOVE this album. The cover though? Total crap. This is the best picture they could find of Robin?! It’s horrible. Then a picture of his back? I get it, facing the crowd and all, but damn. I never saw the album cover until I bought this. Ick. The music however is absolutely stupendous. You have the lilting guitar strokes of songs like “I Can’t Wait Much Longer” and “Daydream”. There was plenty of straight ahead rock and roll here too with “Too Rolling Stoned” and “Little Bit Of Sympathy” and “Lady Love”. “Alethea” has my favorite lyric of the album: “I made life easy just by laughing, I was the first to see the joke”. This whole album is the perfect mix of gritty rock and misty string bending note twisting waves of melody. Every song is a sing-along when this is on. Finding them both was a major coup.

“Jethro Tull – Songs From The Wood” 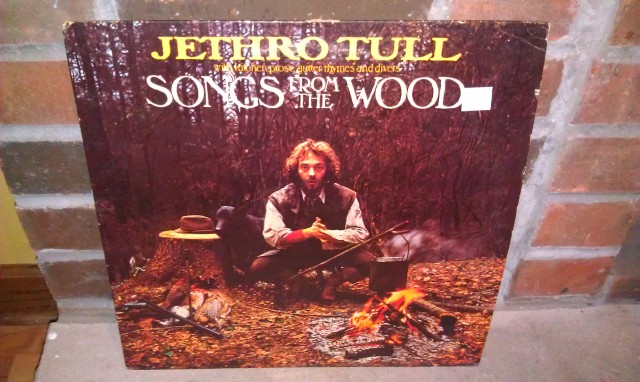 This Jethro Tull album I originally got from the cut-out bins from Meijer Super Store. After getting “Jethro Tull – Live Bursting Out” I had to I had to try more. I was not disappointed. There are great songs on here. “Songs From The Wood” and “Hunting Girl” on side 1 and “Velvet Green” and “Pibroch (Cap In Hand)” on side 2. Jethro Tull was the perfect complement to the music I was trying to straddle at the time. I still loved Linda Ronstadt and The Beatles, but was getting into Van Halen and Cheap Trick. Jethro Tull was right in the middle bridging the gap with rock and slower more non-rock instrument heavy songs with mandolin, lute, glockenspiel and portative organ. Nice.

This one was actually Patti’s brother Steve’s. Abbey got the copy that has ARTHUR written on it with red marker. This is classic. I have to admit, for a long time I thought it was a Greatest Hits album. All the songs are great. I particularly remember cranking “Mercury Blues”. I was beginning to hear and appreciate the blues and that track was awesome. Fun fact, James Cotton played harp on “Blue Odyssey” and “Sweet Maree”. This album and “Book Of Dreams” are all you need. Though I did like the song “Abracadabra” in later years.

“The Doobie Brothers – Best Of The Doobies”

I actually never owned this, or any other Doobie Brothers album before. I always loved the song “China Grove” and “Jesus Is Just Alright With Me” and I decided to give it a shot. Good stuff. Well worth the dollar. 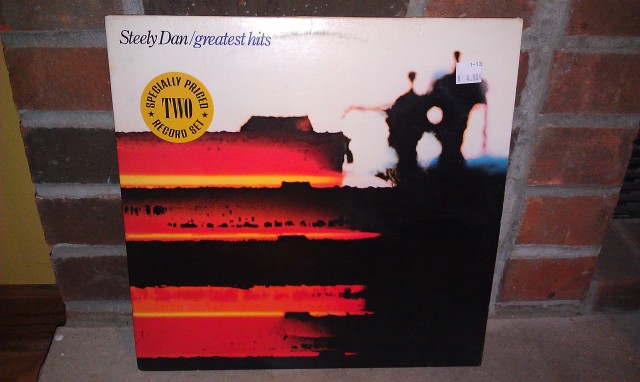 This one I did own. On tape. It was a favorite of mine in the days I was taking the bus to school and hanging at Bayshore mall in Milwaukee on my return trip. It was an odd choice for me, something must have triggered my interest in Steely Dan, but for the life of me I don’t know what it was. I think maybe someone gave me the tape, and I was surprised that I had known many of the songs and just didn’t know them by their names. However it came to me, I suddenly respected their work, and have actually bought several of them on vinyl lately.

“Honor Among Thieves – When The World Runs Fast” 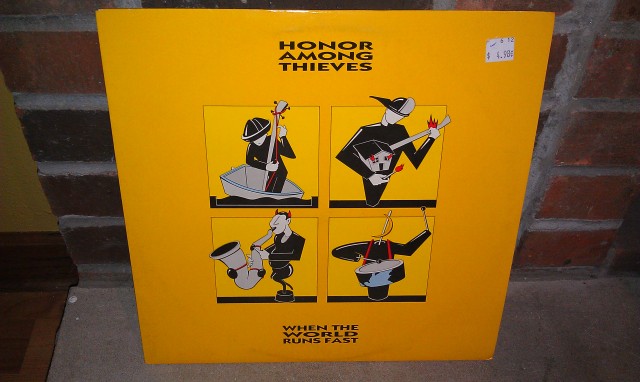 This album was recorded in Madison! Represent!

I have never owned an Honor Among Thieves album, but I knew I would like this. I had heard these guys on the radio on WORT. They had come to the studio and played an acoustic set as “The United Mind Workers”. It was great. I had been recommended to these guys by Dalton who had seen them live and thought I would dig it. He was right. They were awesome acoustic. I of course recorded the show. “United Mind Workers – Live” WORT Aug 31 1991.

I listened to this tape non-stop for weeks. It is actually in a place of reverence in my “briefcase full of blues” tapes. I filled the tape with the good songs from Bonnie Raitt off of “Nick Of Time”. That was 1991. Guess what?!

The guys are still playing!

Check this ad for a show this past Valentines weekend. Cindy and I were both on call or I would have made an attempt to go to this.

I’m sure I would have digitized the tape and burned it to CD and tried to present it to the band with my “auralretentive.wordpress.com” card tucked inside.

The “Honor Among Thieves – When The World Runs Fast” album is great. It was uncanny hearing the voice I am used to from my tape coming from a real live record. It’s bluesy and has a great bar band feel to it. Plus there is saxophone. This album has the song “Let It Out” which they do on the WORT show.

A perfect circle back to the tape I made 22 years ago.