Back in the day one of my friends had his stereo on a humble little rack he made out of 2×4’s and cinder blocks. I always thought it was kind of cool.

Right now I’m only using the record player and the receiver, but one day I can see expanding. A rack big enough to house records and tapes and my Rolling Stone magazines that I can’t seem to part with, and be adjustable for new items and reconfiguration whims. A place to put my cassette and reel-to-reel tape decks. Right now I wouldn’t need all that, but it’s fun to think about.

That’s when I started thinking about the cinder block stereo rack again.

I googled cinder block stereo rack and all variations of it. I could only find 3 decent pictures. Does that mean that no one does this anymore?

This one looks computer generated obviously.

This one is legit, but small. I see Bruce and Coltrane and U2 on the wall. Interesting. 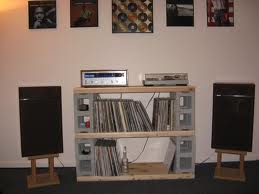 This one is more what I was thinking of, obviously an older picture, but come on. The dude has a record player AND a reel-to-reel. Sweet. What is that thing under the reel-to-reel? It’s all knobs, but the headphones are plugged into it.

At any rate, this is nice, though my serious symetry issues would not allow the cinder blocks to not be stacked in a uniform vertical line. Ugh. This setup is making my eye twitch.

Have you ever seen those Ikea bookcases that cover the entire wall? THAT is what I want my cinder block stereo rack to look like. The components not all stacked right on top of each other. Space enough to the components out and have storage of that kind of media near it. Sort of an open setup with room to get to all the cords, but hide them behind the blocks. I even looked into how to paint the cinder blocks. Seems complicated, but shelving and cinder blocks both painted black would look sharp.

One day I sketched it out and penciled in all my current components and assigned storage areas for tapes and records and magazines. It would be huge. So huge in fact that I would definitely need to secure it to the wall. I wouldn’t just trust gravity. I imagined it to be playing my Hendrix birthday special reel-to-reel, with soft track lighting bathing it in a cool blue and red from separate light bulbs as I adjusted the equalizer and sat back in an overstuffed chair and read Rolling Stone.

Then I imagined time with nothing to do but sit around and listen to music.