I know there are 8 Track tape lovers out there, the same way I love my cassettes. There are lots of places in the internet where you can still buy these.

I had a reel-to-reel tape player that had an 8-track player built into the side. I went out to a resale shop in Madison (that no longer exists) where I knew they had 8-tracks and I bought a Rory Gallagher tape. I had to see if the 8-track player worked. It did. That was the last 8-track I ever played.

There are just some inherent flaws in the whole concept of an 8 Track tape.

Uh… yeah. If you were lucky, you got a tape that didn’t have 4 different songs cut off by the track switch. You 8-trackers know what I’m talking about. We had a few 8-tracks back in the South Bend days and I always thought it was funny to be jamming to a song and then silence, CLICK, a slight pause and then right back into the song. We had a Chicago tape that cut 3 different songs in half as it switched from track to track. Until I downloaded the above picture I must admit I didn’t really know how the internals worked. It all makes sense now.

I have no doubt that there are tons of people who have a killer 8-track collection and have kept them nice and play them nostalgically like I do my cassettes and vinyl. It’s just another format.

Oh, that would be sweet! I would love this one. Even if I didn’t have a player.

Note that “Dogs” is split into “Dogs (Part 1)” and “Dogs (Conclusion)”. Man that would totally mess up the mood. Sigh. Curse you 8-track!

I occasionally glance at the 8-tracks at the places I go for records. They are usually awful selections that I wouldn’t touch in ANY format. The other day though, I saw one that wasn’t bad. And the price was .49 cents. I bought it just to say I have one. 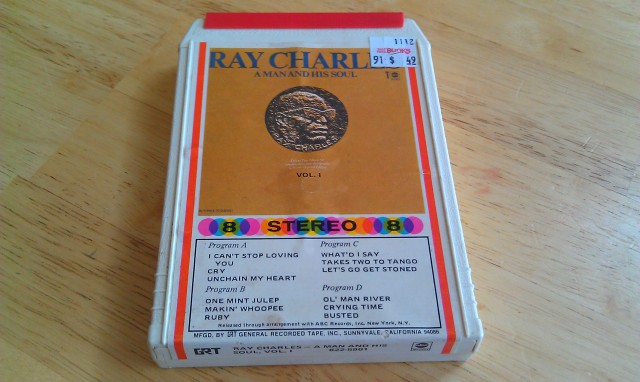 Ray Charles, or “Brother Ray” as my grandfather Ellis used to call him. He used to listen to Ray’s more religious offerings.  “What’d I Say” is on here and “Crying Time” and “Unchain My Heart”. Pretty good collection that I will never play. I noticed that it had a piece of plastic on the top that covered the tape enclosure. 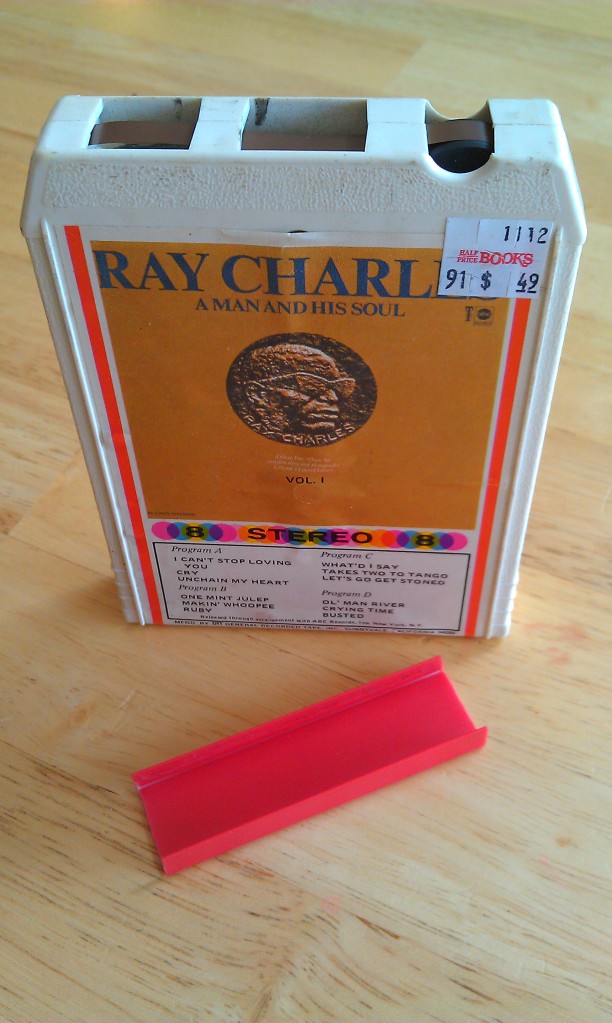 Brilliant. I had actually never seen one of these before, but the few people I mentioned it to said they had. Hmm… someone made a killing on a tiny piece of plastic. It was probably the same guy who invented the tabs you knock out of a cassette to prevent taping over it. Millionaire now probably.

If I ever run across a cheap copy of any Pink Floyd 8-track I’ll step up. Sorry Brother Ray.

While I was there that day I also purchased another format of music. The 45 !

They have a ton there and I waded through a giant pile and picked this one. 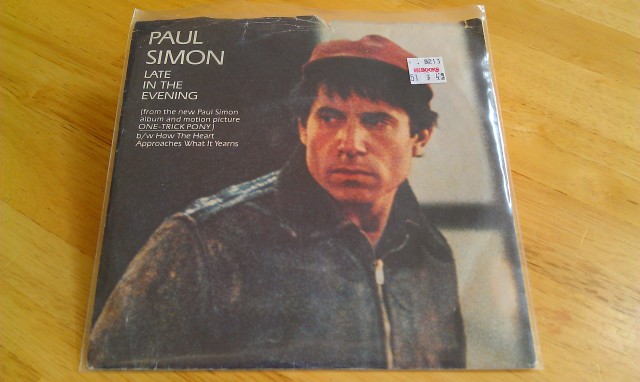 I have toyed with Paul Simon many times in my days and have owned and now own a couple Simon and Garfunkel vinyls. This seemed like a good choice for my token 45. I know and love this song. The 45 is clean and came in plastic! How could I say no at .49 cents. 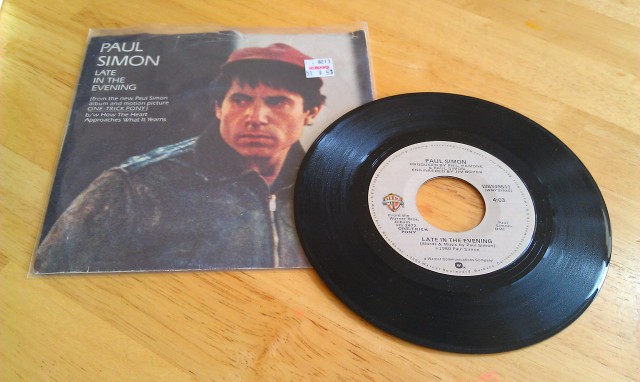 Also included was another tiny piece of plastic that probably made someone somewhere a bit of money.

This little gem allowed you to play the 45 on a record player that had a spindle for LP records (33 1/3) and didn’t have the attachment that fit over that spindle that fit the opening of a 45.

You attached it to the center hole and boom, you had a smaller, LP spindle sized center.

I don’t recall if these came with the 45’s or not back in the day. I had the center column spindle thing on the console stereo, or, on the small record player I had that grandma Ellis got me from a garage sale there was no LP option. It was built for 45’s only.

Most 45’s you find for sale at the record stores now are either stacked in a pile unceremoniously, or are just in plain white paper 45 sleeves. To find this nice Paul Simon was pretty cool.