The city-wide garage sale is big. No doubt about it.

This year I asked Dalton if I could put 4 of my record clocks in his garage sale. I was selling them for $15 each. In the end, 2 of the 4 sold. One LP and one 78.  So that turned out pretty good. I’m not going to go into business, but some people thought they were cool. I think I spent about 5 bucks to make the 2 clocks that sold, so I’m in the profit zone.

While I was there I looked through the box of records that was mainly Dalton’s fathers stuff. Ray Conif, Sounds Of The 70’s and other typical fare. Dalton’s few in the box were scary, stuff he, as a recently come back to vinyl lover didn’t even want. There was one in the box that I bought though. 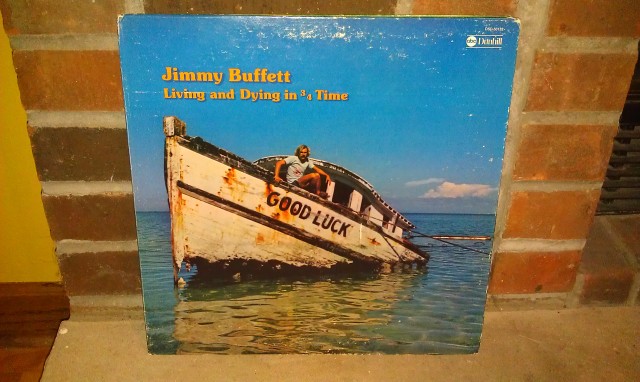 I have only heard a little Jimmy Buffet in my days, but I was curious. Love the cover of this. Good Luck on the derelict boat. I have heard the name of this album before and it seemed like a famous one so… I’ll give it a try.

I did hit a couple of garage sales that weekend. Cindy and I had scoured the sales last year looking for wedding stuff and I happened upon a couple of places with records.

This year I found a few places selling records, but the selections were awesome. I spent about $30 bucks (including the Buffet), but my haul was incredible. A little of everything.

I know what you’re saying… but wait. So this box of 8-track tapes was a buck. I spent $0.49 on a Ray Charles 8-track just a few months ago, just so I could own one. The mystifying format of 8-tracks have a bit of history with me. Here was a whole box for a buck. Dean and Frank were right on top, but so were Percy Faith and Judy Garland. I figured the Dean and Frank beat out Ray Charles for my display model “I own an 8-track” conversations. I bought it. I loved the look on the ladies face when I handed her the dollar bill. “I’ll take these” I said with a smile. She was probably like: “Sucker!”

Inside the box was the tape I actually bought the box for. The tape that really made it worth a buck. 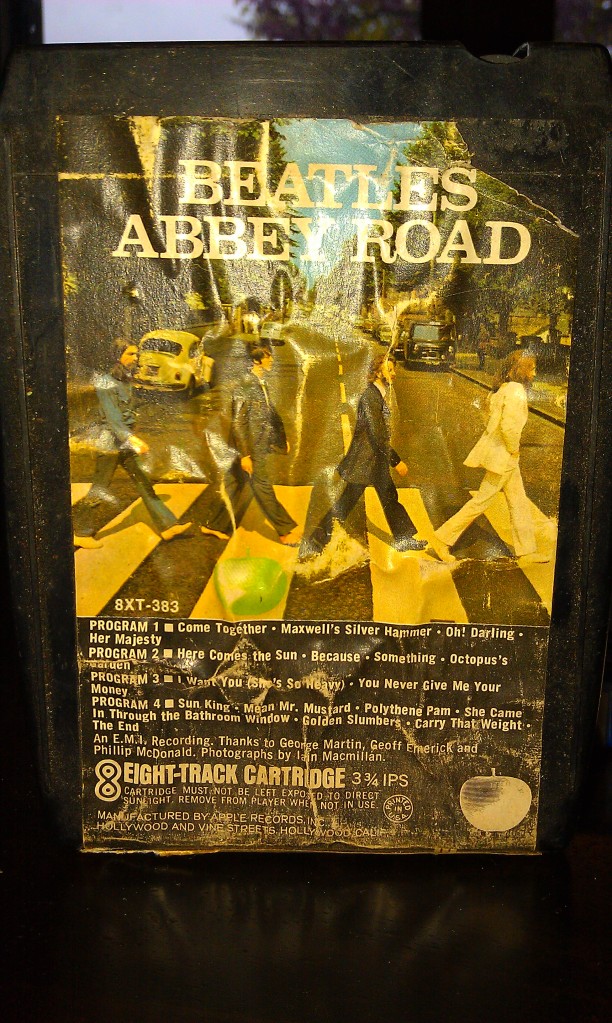 This is “The Beatles – Abbey Road” in Apple 8-track. Boom. Yeah it’s not in great shape and I have no player, but, it’s The Beatles! I found it very interesting that the track list was so manipulated and out of order to make it fit on the four tracks without splitting any songs. That is the nature of the format. But wait, there was a secret about this tape.

Ugh. What I didn’t notice as I eyed the tape at the garage sale, was that someone had put a piece of masking tape over the end of it, and on that masking tape was the name of what I can only assume is a country singer. Johnny Horton. 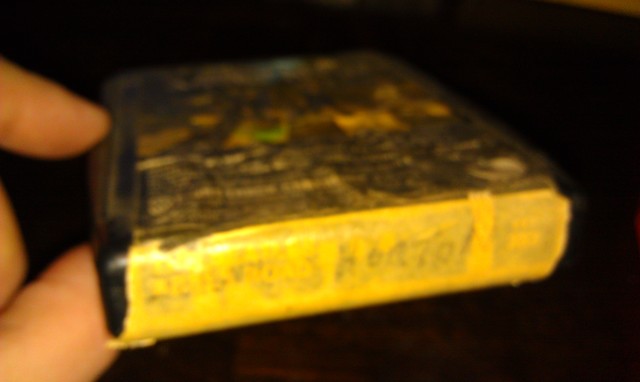 So my guess is that someone RECORDED OVER this tape. Are you kidding me!? WTF. Seriously. For my purposes, it is still as cool since I never really have plans to actually play it. I’ll see if I can get the masking tape off and the Johnny Horton part will remain my little secret. Well, and whoever is reading this of course.

Most of the other tapes in the box were either blanks that someone had recorded on, most hand labelled, but a few with painstakingly typed out cards attached. 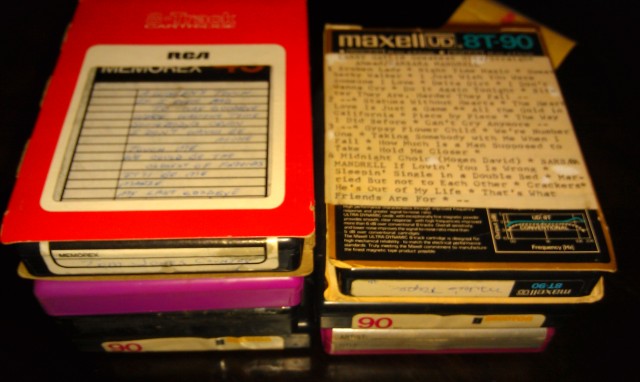 or store-bought tapes of various artists 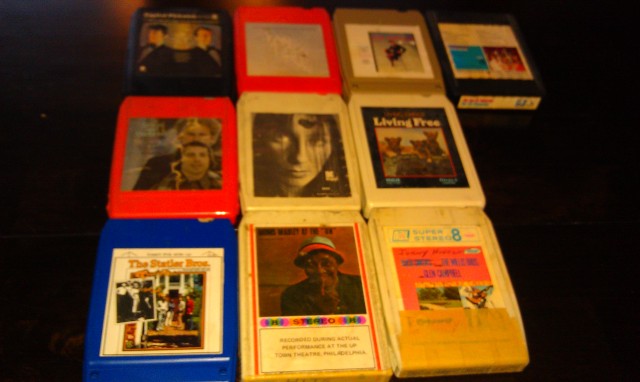 some I recognized, some I didn’t. Two of these had masking tape on them too. “Moms Mabley At The UN” had tape on it someone wrote “HITS” on. Turns out she was a comedian and has quite a few albums. That might have been interesting to listen to. Cher on 8-track… does anything scream 70’s more than that?

The last surprise of the box was an 8-track that seemed to not be taped over and was still in good shape. It and The Beatles (or Johnny Horton) tape were worth the dollar. 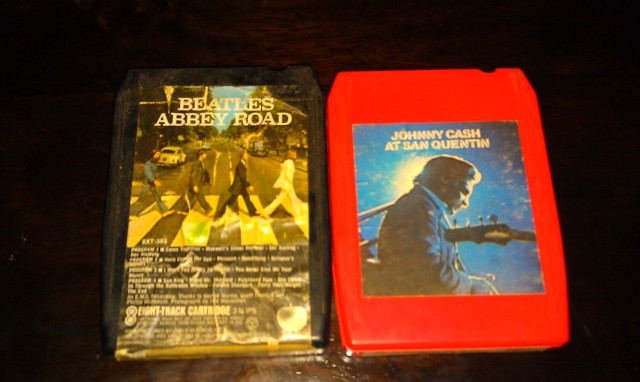 “Johnny Cash – At San Quentin” I would play if I had a player. These 2 are keepers. The others will probably get donated at some point.

Then, I got some equipment. 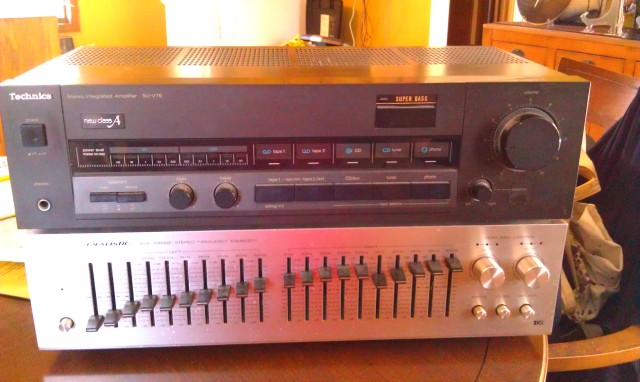 I paid $50 for my last Receiver and looked all over Madison and ended up at Pawn America finally. This is an Amplifier only, so no stereo, but it has everything else and will work perfectly to hook my tape deck to. I have an equalizer that I bought from my Summit Ave. housemate Tom way back in the UW Milwaukee days, which during my bootleg tape phase was absolutely essential. That one is only single channel. There is only one set of sliders that mirror the adjustments across both channels. This one has 2 sets of sliders. That’s like this one going to 11! 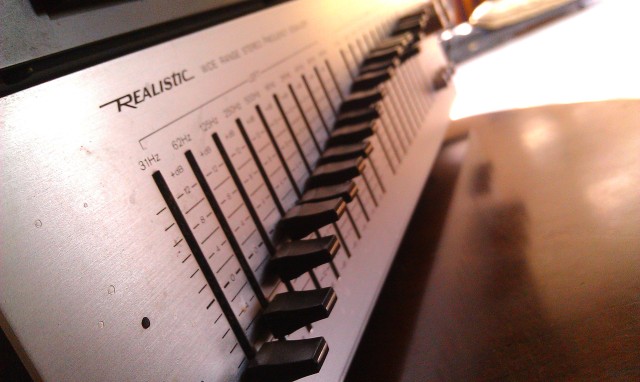 I posted these two items on www.tapeheads.net and I was told that they are not too bad. For $7 bucks… I couldn’t resist. They are the tape deck stereo now.

For records… I found 3 sales with records.

This guy had records in a plastic bin, a buck a piece and I found some good stuff. Cindy even bought one. It was so adorable. That makes 2 records for her. 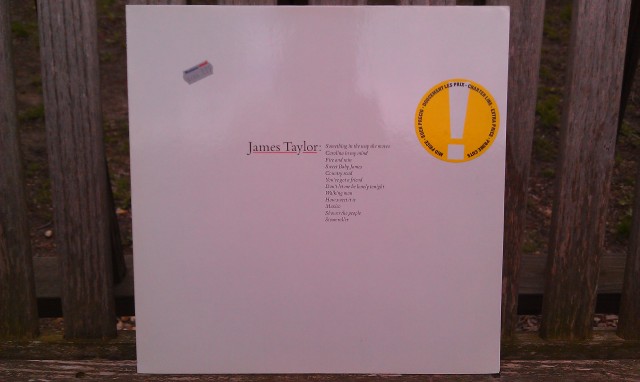 We played this on Sunday morning and it is great. It was then that I really noticed the yellow sticker and the price tag: Montanus Aktuell 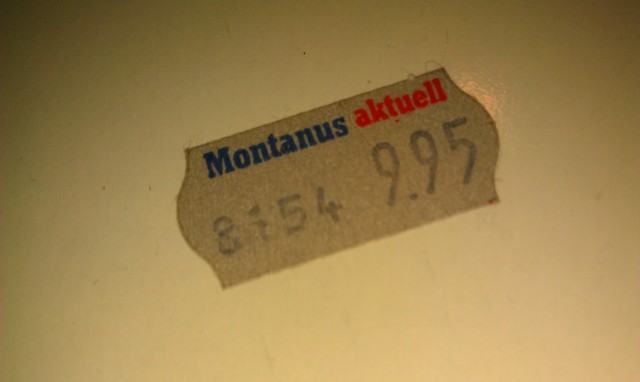 Turns out Monatnus is a German bookstore chain. They also had a records department. So this album is a German pressing of “James Taylor – Greatest Hits”. It was, according to the matrix stamp, pressed in Alsdorf. 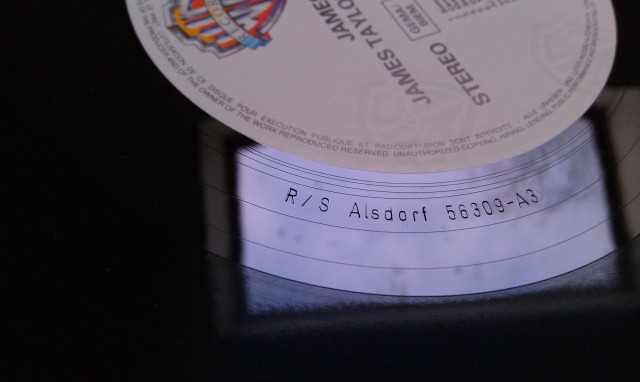 This guy also took care of his albums. The paper sleeve for this album was replaced with a discwasher brand V.R.P. sleeve. Valuable Record Protector. 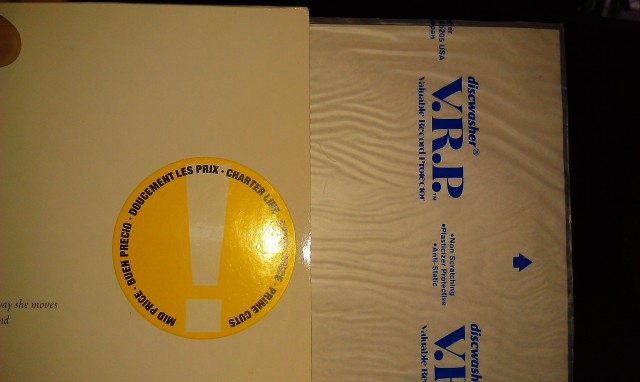 For my selections I picked 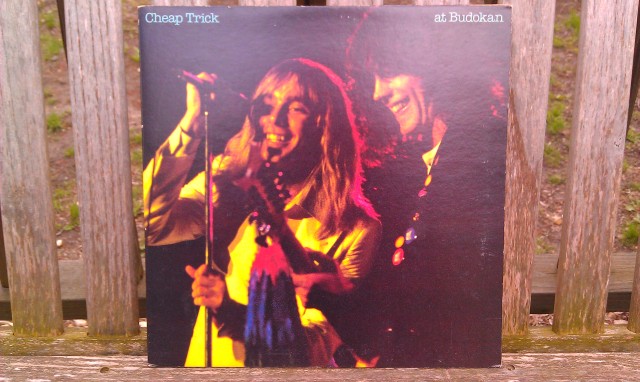 This is an undisputed classic. I played this to D E A T H in Ann Arbor. I love all the screaming Japanese fans, they are essential to the record. I was stoked to find this. 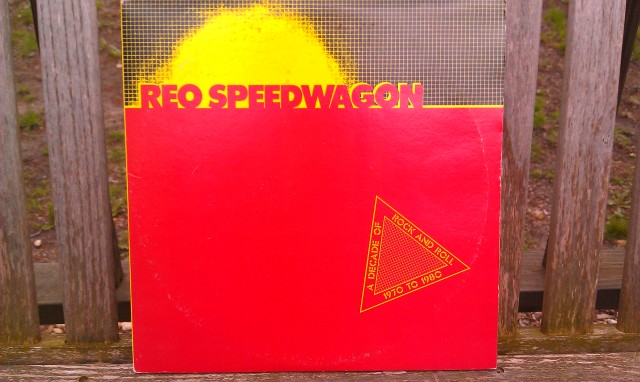 I have been toying with getting some REO at Half Price Books, but I keep putting them back. I like the old stuff, but not all the album. So getting this greatest hits collection will satisfy my REO jones without making me buy stuff like this 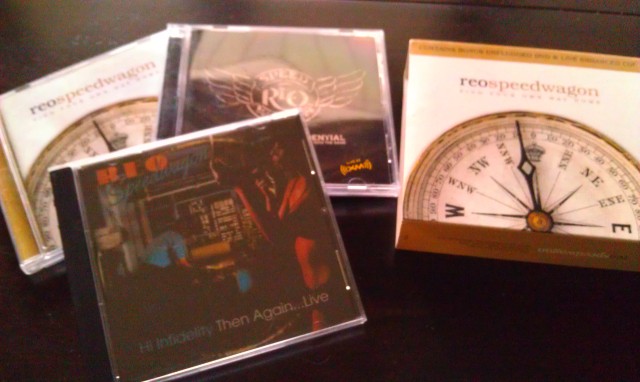 when they tour Wal-Mart again. You can’t give this away.

The Decade album has the song that turned me on to REO Speedwagon back in the day: “Golden Country”. Now you have to understand that REO was a band originally from Champaign Illinois. The local support for REO was incredible in my high school in Hoffmann Estates Illinois. They considered them local boys. During my high school time “REO Speedwagon – Hi Infidelity” was released. It went boom. That was my introduction to the band. It wasn’t until UW Milwaukee though that I heard “You Can Tune A Piano, But You Can’t Tuna Fish” where I heard old REO and really dug it.

I also picked up, put down, then picked up again these weird picture discs. 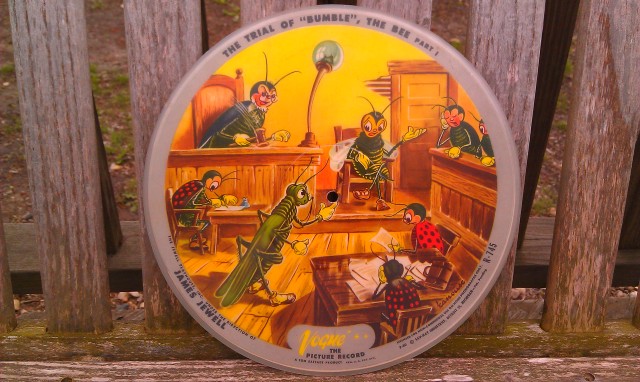 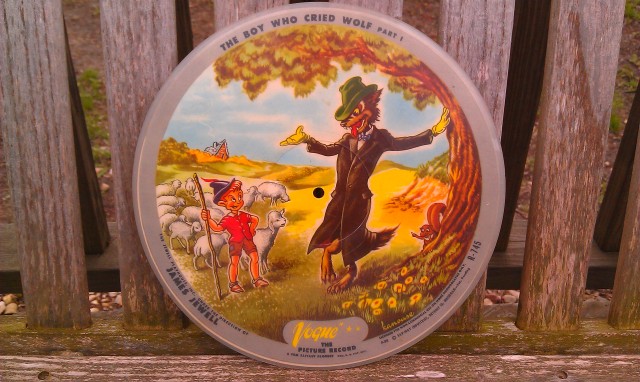 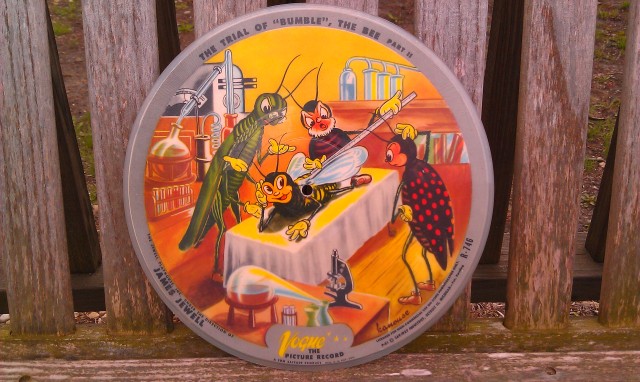 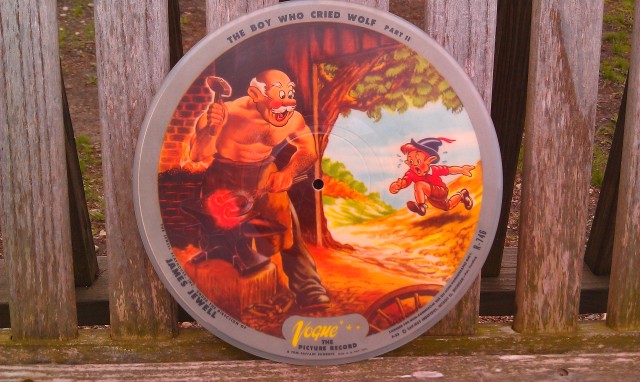 They are kids records clearly, and I thought that I could maybe make cool clocks out of them. Otherwise I might have passed on them. Turns out these are 78’s. They are Vogue picture records. Only 74 versions of these were made and they are quite collectible. Most are singles, this one happens to be a set. I’m glad I picked them up. They are worth about $30 bucks each. These are records R-745 and R-746 in the Vogue catalog.

Cool piece of history. They are more like art than records. Awesome.

These were a good find.