So the B. B. King show was different than a lot of the shows I have been too. The Overture Center is clean and big and classy.

At any other place the changeover between opener and the headliner is just a break to go get concessions. At the Overture Center, this break is called an INTERMISSION.

Some things never change though.  Guess who was outside playing his guitar and blowing kazoo? That’s right. Art Paul Schlosser. Madison’s own. 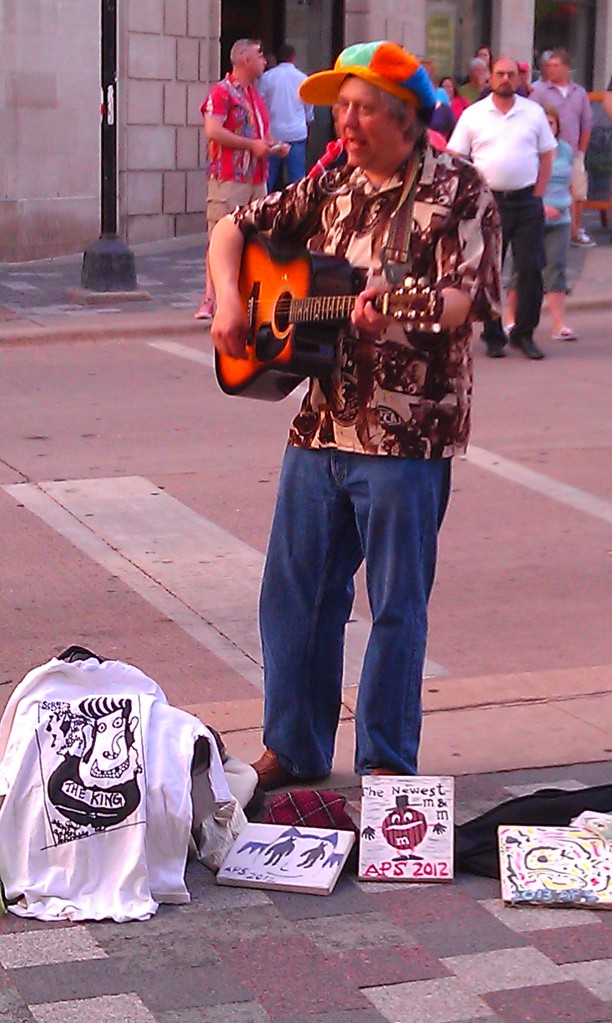 I have run into Paul many times in Madison as I’m sure everyone else has. Next time, I think I may buy one of his art squares for my future man cave stereo room. The Newest M & M, you are mine next time.

Josh and I arrived at the Overture Center just in time to go up the stairs and have them open the doors to the balcony where our seats were. I was stoked because I had seats 347 and 348 which were on the balcony rail. As we walked in and I saw where I though our seats were, I was stoked. The usher looked at my ticket and looked WAY up and directed me to the third seating assistant near the ceiling of the hall. Ugh! There must have been some mixup I thought.

There was. When I consulted the seating chart I found the first 347 and 348 I found, on the balcony rail. However, EVERY row has seat 347 and 348. Oops. Turns out our $50 seats were WAY WAY up there. There were only 2 full rows behind us! I took a picture of Josh in our seats. 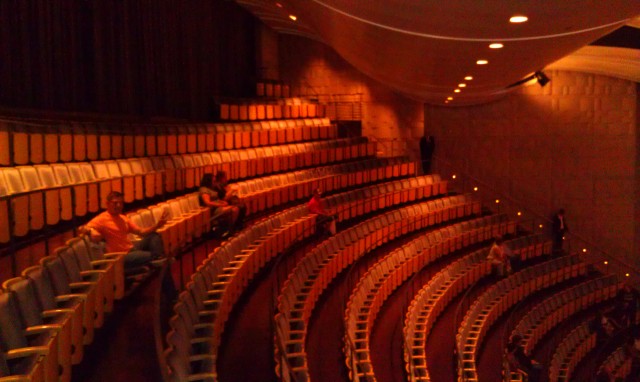 The hall was nice and the seats were at such an angle that we wouldn’t be looking through everyone in rows in front of us. I got to give them that one. The stage was fffffaaaarrrrr away.

I didn’t expect B. B. to be using wireless and running all around the stage though, so the music was going to be the thing, and I heard an usher say that the sound in our area was good. I hoped they were right. (They were.)

After an obligatory, “We Were Here” photo

We settled back. I was shocked when at 8:05 the lights went down. Starting on time!? Wow. Impressive.

Out came Anthony Gomes. He was a surprise in that I had no idea there was an opener. He used every trick in the guitar player book. He played over his head, with his teeth, fret work, soft, loud, harmonics… and I have to say, I spent the first song going HARUMPH since I expected B. B. right out of the blocks. However, by the second song, I was into it. He was good. I couldn’t knock him. We spent a couple songs trying to pigeon hole his sound. Josh thought early Cream, I was thinking a bluesy Pat Travers or SRV. He had some slower songs that I wasn’t a huge fan of, but overall he was solid and entertaining and I liked him enough to buy his CD after the show. More on that later. I got a picture, but it was just a light colored blob on a dark colored blob.

The crowd was the most curious mix of any show I have been to. There were people in concert T’s, people in suits and dresses, young and old. One poor woman who came in on a wheelchair made it up to our area one painfully slow step at a time. I think it may have been her screaming “Lucille” multiple times during B. B.’s set.

During “intermission” they changed over the stage and again with awesome timing we returned to our seats right before the lights went down again and B. B.’s band started up. This is pretty typical of “big time” older acts like B. B. King. The band plays a few songs to warm the crowd and test the sound. The first song was good. Then they launched into a second in which each and every band member, 8 in all, had solos. It was a long song. The music was good, don’t get me wrong, but it was a long song. Then, with a roar from the crowd, B. B. came out and sat on a chair stage front and center. He was wearing a shiny silver jacket and I tried to get a picture, but it was horrible. Josh got a better one. B. B. is the one glowing.

The first song that B. B. played once he was out and situated was a long slow jam wherein he introduced the members of the band, each and every one, with a story of some sort.

This was a long song and in it B. B. was only really playing a little, however, it was cool to hear him talk and joke with the band members. You rarely get to hear anyone talk that much in a show. They come in play and leave. It was nice to hear him talk. Then when all the introductions were done, the show really began. B. B. played and sang. His voice, despite being 87 years old was definitely strong. I was impressed. Even at the distance we were at I could see B. B.’s signature hand wobble tremolo technique. His guitar work was great and the sound was good and I totally dug it. I was seeing B. B. King! It was like seeing Sinatra. B. B. King is an undisputed classic.

He played great songs. Mostly slower tempo stuff and laughed off a down front audience call for “The Thrill Is Gone” saying something to the effect that he didn’t want everyone feeling low already. Then he played it a few songs later to a huge roar of approval. I was WOOOO-ing right along with everyone else. Then he played a happier tune about love and a woman in the front row right stood up and tried to get her husband to get up too. B. B. quipped that he might be asleep. Eventually he got up and they slow danced to the rest of the song, right there in front of the stage. I thought it was sweet. They got an ovation when they sat down and B. B. invited us to give them a hand. We did.

The juxtaposition between Anthony Gomes who was flashy and crammed a lot of notes in and B. B. who could say a lot with just a few notes was striking. It occurred to me that it was the feeling and emotion I took from the way he played that added almost as much to the songs as his guitar work. The way he would come in with solos and riffs and join the band like punctuation that gave the songs real presence.

When the woman in the top right finally got her screams of “Lucille” heard, B. B. commented that the first Lucille’s neck was broke. “This is the other one” he said.

Then towards the end of the show, a guy who he had made comments about between songs over on the right near the front, who must have been standing near the wall, walked without a care in the world in front of the sold out house (with no Security wrestling him to the ground) right up to the front of the stage and reached his hand out. B. B. said into the mic, “You want to shake my hand?” He reached down as far as he could reach and the man reached up as far as he could reach and they managed to shake hands. Then he slowly walked away like it was no big deal that he had done this. I was astonished. I thought it was mighty cool of B. B. and was surprised that no one stopped it.

In truth, when the lights came up and it was clear that the show was for all intents and purposes over, B. B. was signing autographs on banners and whatnot. I couldn’t believe it.

In retrospect, it was all this, the dancing couple, the handshaking and autograph signing and the amazing music that brought us all to the show in the first place. That is B. B. King for you. A classic.

As we made our way out, we had to hit the merch table.

I bought a B. B. King tour poster for my work cube and I waited in a short line to get Anthony Gomes CD. He was signing them too. This is not what I expected him to look like when I saw him from like 200 yards away in the K row of the balcony. 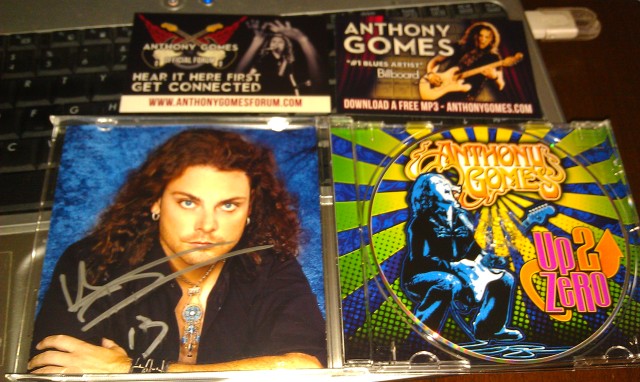 I got a shot as he signed Josh’s CD.

Art Paul was gone when we got out.

It was a great show and a great night.