This one had a couple bins of records and 45’s that were in interesting shape. A small percent of them had regular covers, but the vast majority had covers like this:

That’s “Curtis Mayfield – Superfly”. As you can see by the back of the “record sleeve” it was made from a Woodman’s bag.

This was the case with all the 45’s as well, and they were all numbered. The guy selling them said they were his father-in-laws and didn’t offer up any other info as to the weird homemade sleeves. Some of the albums were even wrapped in newspaper. I bought this one just because it was Curtis Mayfield and I have been really diggin’ on Funk lately.

“Steve Martin – Comedy Is Not Pretty” 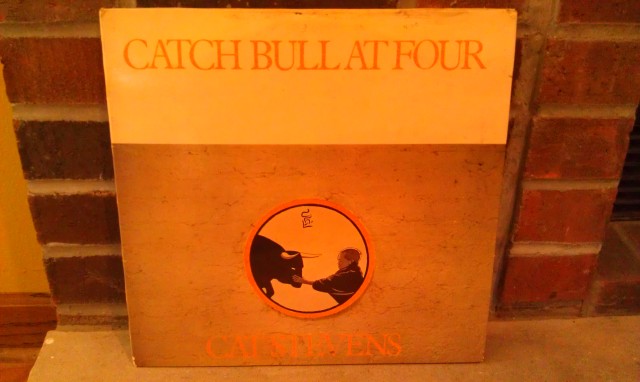 I re-bought this one because I want to make a clock out of it. It has the cover circular illustration on the label of the record. It would make a great clock.

I have liked all the Cat Stevens albums I have gotten. This one is in rough shape on the outside, but not bad inside. For .75 cents each, I couldn’t go too far wrong.

This was the big one. There was not much to speak of in this garage at first, but when we approached the back I spotted 3 bins of records. Score ! There were your standard crap albums, but soon I came across one that made me go  WHOA! What do we have here. 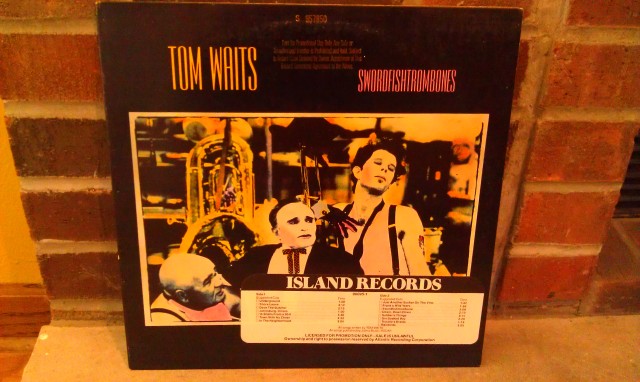 I haven’t listened to this one much, but it’s Tom Waits. I had to get it. What really struck me though was that this was someones collection who had unusual taste. I suspected that there might be more surprises. 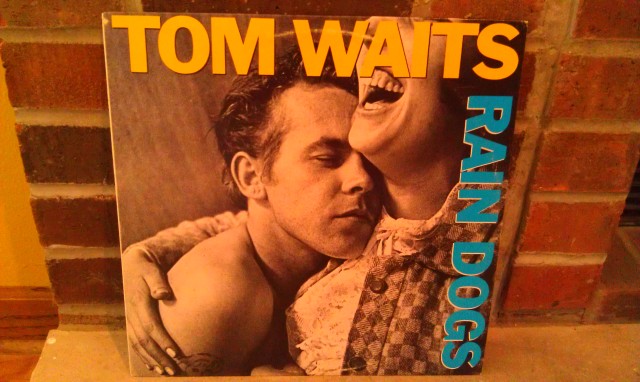 Tom Waits is solid. Not for every mood or party, but when you need Tom Waits, it’s good to have some on hand. I used to have “Frank’s Wild Years” on vinyl, recommended to me by Jeff, but these two are awesome.

The Beatles! Really? At a garage sale. Cool. I had this one back in the day. Jeff! Look, Beatles!

This is the one I used to have. I played this one all the time in Ann Arbor. I think it was one I got from the Meijer Superstore cut out bins, but it is a classic. AND, this one still has the poster in it! 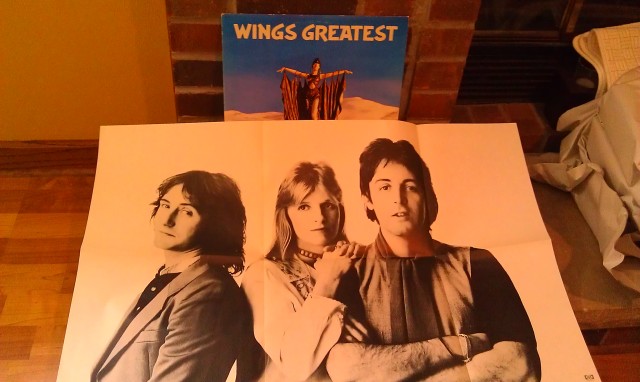 I believe I had this up in my room. Cool. Hello old friends. 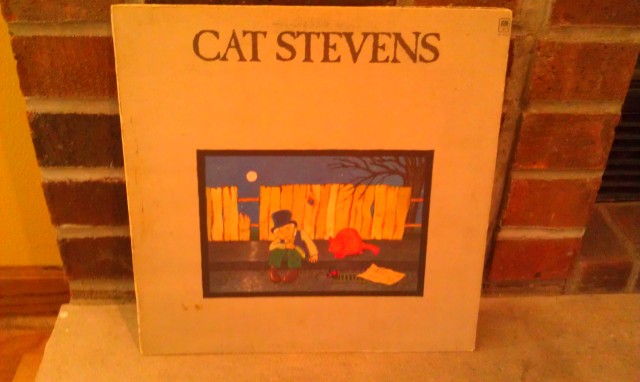 Cat Stevens is another solid artist. I haven’t been disappointed with any of the Cat Stevens albums I have gotten recently. I wonder why I never had any before. 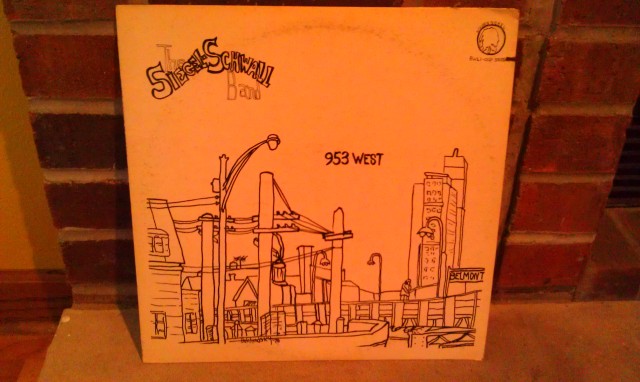 I know I knew this name. Jim Schwall still tours Madison occasionally. I had to check this one out. Go local! Well, if Chicago is considered local. 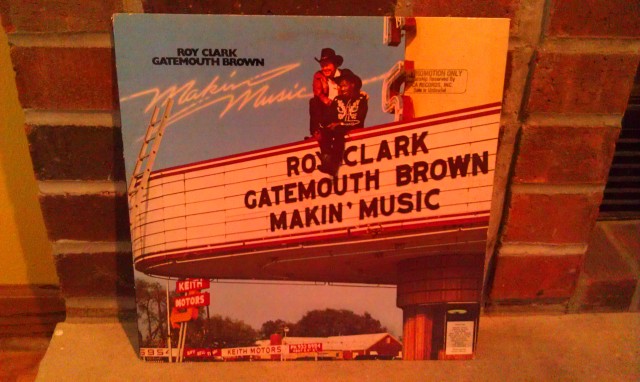 When the guy at the garage sale saw me with this one in my hands he told me it was a good one and got excited I was diggin’ in his crates. I would never buy a Roy Clark album, but I do like me some Clarence Gatemouth Brown. I saw him on a Nashville Network TV show. He sort of is on the blurry line between blues and country. I ended up making a bootleg tape of it. This could be really interesting.

I had this tape and I wore it out. I got into a huge Joe Jackson phase. This one has of course “Is She Really Going Out With Him” but every song is great. Every song is punchy and there is a touch of new wave here. He went on to do good piano heavy stuff, but this album in particular is the exact right combination of bass line and groove and strong vocals. If you can only have one Joe Jackson album, make it this one. 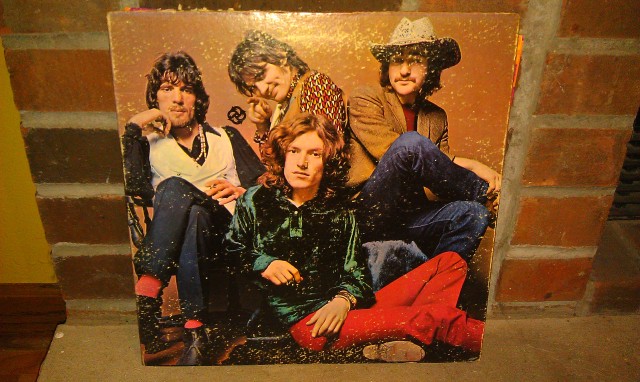 This is their second album. I don’t think I have ever heard it. I’ll give it a shot.

“Hot Tuna – First Pull Up, Then Pull Down”

I have only heard a little Hot Tuna in my day, but I thought it might be worth a try. I know that Hot Tuna is part of Jefferson Airplane. Couldn’t be bad, right?

Yeah, I know I already have this one, but mine is in bad shape, so I thought I’d re-buy it for a buck. This is old Elvis and I find myself liking older Elvis more and more.

I’ve never owned this one. Lou Reed has always been an enigma to me. Velevet Underground stuff, some I like and some not, and I like the Lou Reed I hear on the radio, but I have never delved in. This could be my chance. I’ll give him a chance. This is an iconic cover at the very least.

Then came the 3 biggest surprises for a buck in the bins. 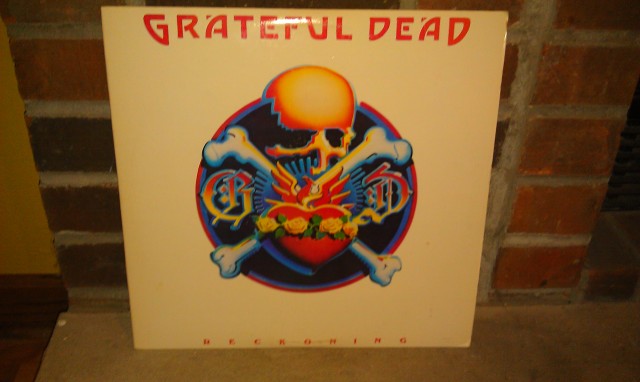 This is a 2 record set of live material. For a buck. Nice! I’m no deadhead, but I do like me some Grateful Dead. This was a fantastic find, but there was more. 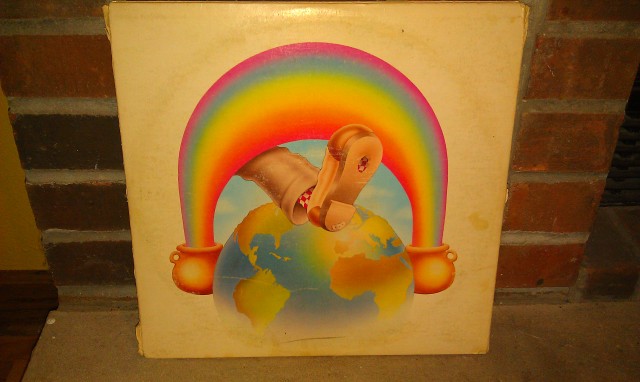 This one is a triple album set! For a buck!

That is a lot of sunshine daydream. There was one more surprise in the bins though at that garage sale. It doesn’t really have a name so I’ll just post the picture.

This was recorded from an FM broadcast of a Fillmore West August 1971 show. I’ve listened to it already and it is clean and no scratches and awesome.

I have lots of bootleg Dead, anyone can with about 10 minutes on the Internet, but this is vinyl. Easily the coolest thing I got at the garage sales this year and for only a buck.