Dalton ended up recently with an extra copy of “Pink Floyd – The Final Cut” and who was the lucky recipient? This guy.

This is basically a Roger Waters album that the rest of the band backs him on. 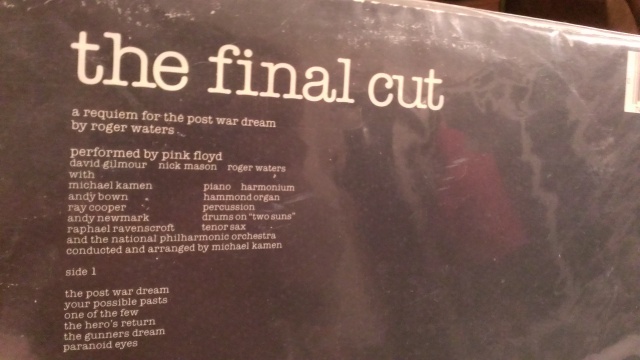 I have always loved this one. It hints at the studio and microphone techniques that Roger will expand on and really perfect on his solo albums. It’s a pretty mellow album full of sadness and melancholy.

I first heard tracks from this by way of a tape from Jeff many years ago. He sent me a tape called “War” when I lived in the rented room off the UW Milwaukee campus. I remember being in a pretty heavy Floyd phase. Dave Stewart had given me his copy of “The Wall” shortly after the movie came out, but I was not in a place back then to get into it. Now here at college though I had finally given “Pink Floyd – The Wall” another chance and saw the film finally at a campus theater. I started getting old Floyd from friends around campus, I even ended up with a supposedly rare film soundtrack (with the actual sound from the film and Bob Geldof singing) as well as the normal “The Wall” album. No one had “The Final Cut” though.

Then came Jeff’s Tape # 49, complete with burned hole in the plastic cover and melting army face… 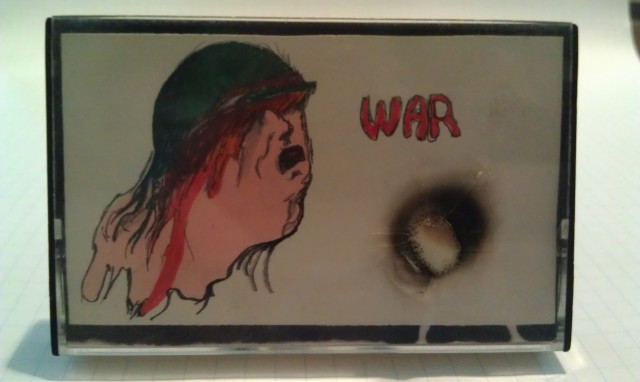 The bulk of this tape was an interview with Roger Waters about his recording of the “The Final Cut” during which the played the lion’s share of the songs. I found myself listening to this tape a lot.

When I finally got and dubbed someone’s copy of “The Final Cut” and was able to hear it all the songs as they were laid out to be listened to… I loved it even more. This introspective soul searching music about sad people and hard times really struck a nerve with me. Of course it has “Not Now John” for the up-tempo fans, but for me, tracks like “Two Suns In The Sunset” are the mood I am after when I want to listen to Floyd.

“The Final Cut” was the last Pink Floyd album, at least with Waters. I didn’t really get into the smooth David Gilmour Pink Floyd. It wasn’t bad by any means, I guess I just prefer the Waters vocals.

With this album, my Pink Floyd collection is complete, minus a vinyl copy of “The Wall”.