In June of 1996 I visited Jeff in San Francisco.

We hadn’t seen each other for several years. He was married now (Hi Jeannie!) and I spent a week there hanging out with them and it was great. We did all the tourist things that everyone there does and we spent time just hanging out and talking.

While I was there Jeff introduced me to some new music. One evening we sat talking and Jeff put on “Liz Phair – Exile In Guyville”. I was struck by her voice. I made a copy and absorbed it in the weeks following the trip. Amazing. I was at the time high on a whole different style of music, but this one made me take note. We also listened to Red House Painters. Jeff described these guys as “sad core”. It sounded oftentimes like it was playing at the wrong speed. I found it haunting and spent a good deal of time getting the entire catalog, including solo stuff and the lead singers next band “Sun Kill Moon”. It was a good pairing of artists to be exposed to.

At one point we even went to see one of Jeff’s friend and his band practice. They were called “Big Trash Day” and I recall they were really good. They were rehearsing in a little building and I stood absorbing the music and the atmosphere. The whole building was oozing with the live band ambiance. Posters of old bands and equipment everywhere and the music was loud. It was awesome. Wonder where they are today. Still talk to any “Big Trash Day” friends Jeff? Tell them I said hi.

It was during this trip that we visited a record store. I expected a San Fran record store to be wildly exotic for some reason, it was normal of course, but I had to buy a CD I could always say I got it in San Fran. So, I dug into my trip money and I got 2 CD’s by a new favorite band of mine : Green Day. They had a copy of “1039 Smoothed Out Slappy Hours”

These were earlier albums than “Dookie” but I loved them. Every night (except one) in San Fran I went to bed listening to the song “2000 Light Years Away” off of “Kerplunk”.

I also got a copy of a Cure tape that started me on a Cure revival again.

It was a long play tape with one whole album on each side.

This is a good one if you can find it. Anyway…

The other musical event of the trip was a surprise from Jeff of tickets for us to go see a concert. It was Widespread Panic at the Warfield June 7 1996. 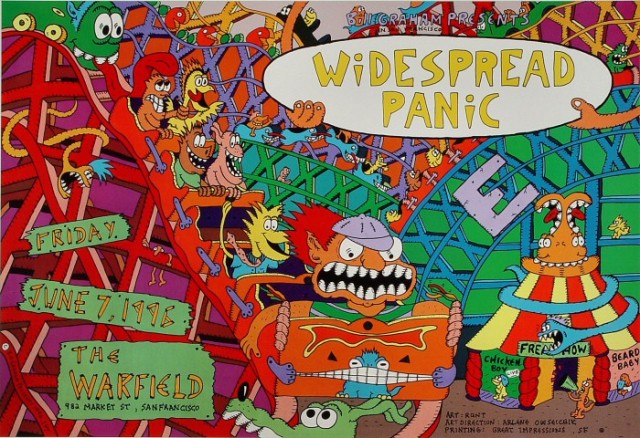 I knew nothing about Widespread Panic, but any live music is good. This was a huge deal for me. Up to that point I had seen only a handful of concerts and this was a BIG one. My concert experience outside of Summerfest was limited to a David Bowie concert. In an aligning of the stars Jeff also arranged for us to go that day to “City Rock”, a rock climbing gym. I was totally into the concept of rock climbing and evidently had made that position known. I had built a rock climbing wall in my garage and had been trying to build finger strength, but it was about as good as you would expect a homemade garage built wall to be. It was all I had though.

The day of concert, in the morning we went to the rock climbing gym. I was in awe and 100% psyched. The place was huge and there was bouldering (up to a certain height) and rope climbing as well. We weren’t able to do rope climbing without training, which was good, because we just wanted to do the bouldering. It was a total gas. I had SO much fun. We were there climbing around for hours. We even climbed on a mechanical climbing wall that was like a vertical treadmill with holds attached. So you climbed and adjusted the speed of the belt. You were never more than a foot or so off the ground. It was so cool. Jeff brought his video camera and we filmed quite a lot of our adventure there. I was proudly wearing my N.I.N. shirt. 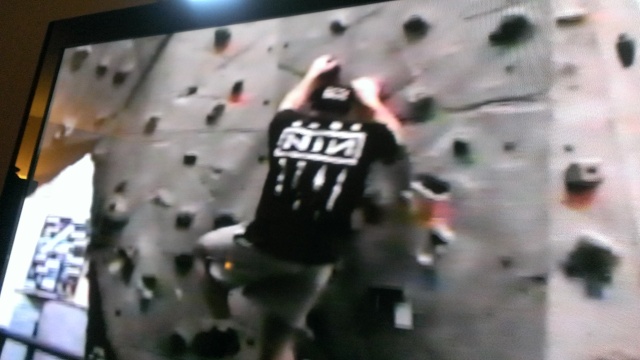 Why do I mention the bouldering? It has nothing to do with music, right? Right. However, it goes to my physical being when we ended up at the concert. Read on.

So, after bouldering for hours, we headed back to Jeff’s and everyone showered and changed for the show. We met a couple of Jeff’s friends at a bar before the show for some beers and that is when it hit me.

Every muscle in my body locked up on the way to the bar. I noticed it as we were driving, but was surprised when in the bar, when my bottle of beer was set in front of me it literally HURT to grip it. To get it to my mouth I had to assist my bottle holding arm with my empty arm. I have never felt anything like that before in my life. It was comical. I was also famished. I got an appetizer but it was useless against the aching body and empty stomach. I topped that off with 3 or 4 beers, my lightweight upper limit, and by the time we got inside the theater I was buzzed and broken. It wasn’t like I was seeing AC/DC and drunk or high in the parking lot and got left behind to sleep it off and never saw the show, it was more like being awake for surgery and feeling everything.

Widespread Panic hit the stage and I didn’t know any of the music and the bass was thudding against my sore muscles and the heat inside the building was incredible. I was in that place where you can either lose it, or fight and slowly come back to earth. I fought it. It wasn’t easy though. Somehow another round of beers was offered and I nursed it as much as possible, deftly avoiding another round that surely would have seen me lapse into a coma. Also, every song from Widespread Panic seemed to include 1 ½ minutes of lyrics and then 10 minutes of solos. Exaggeration I’m sure, but there was nothing I could hook into and help me attach myself to the moment, it was just too surreal. I remember loving the music, but it was like I was driving down the road looking at a mile long mural and only seeing what was out my window as it flowed by. There were colors and sounds and flashes of things, but nothing I could focus on.

This seemed to go on for hours! I felt like I was at the longest concert that had EVER happened, and though I liked it, my body was just not with me. To this day, I have so little concrete recollection of the show, I feel bad.

I have since gotten many Widespread Panic concerts and they are great. I just couldn’t handle it that night.

At some point, I started to gather my faculties, gorged on some concession food and made it back to the land of the living, which allowed me to interact with Jeff who I seemed to notice for the first time was right next to me, and to begin to soak in my surroundings. I mean, this was the Warfield. I had bootlegs that were recorded here in my collection at home. I was standing in history and there were concert posters all over the place of great shows of the past that I would have loved to have seen.

During the lengthy encore my arms and legs started to quiver like I was cold and this was the first time ever at a concert where my body was just giving up on me. I felt myself say in my head in horror: “I wish this was over”. Ugh. I couldn’t believe it. My head loved it, but my body was mutinying.

I made it to the end and as I recall, once we made it back to Jeff’s place, I collapsed in bed fully clothed without so much as a goodnight. I was out in seconds.

When I woke up I expected to be paralyzed, but I actually felt pretty good. Back then I was younger and could heal faster.

Thanks again Jeff for providing the opportunity. It was a truly memorable experience.

P.S.    As I wrote this I recalled that the show poster looked quite a lot like Jeff’s tape called “Whatalongstrangetripit’sbeen”

For those of you into Widespread Panic, you can find the show here