As I was putting some stuff up on top of a bookcase in the basement, I kept hitting something up there I couldn’t see. When I reached up I could feel a tape. My collection of Blues tapes is on top of the bookcase next to this one. When I pulled it down I was pleasantly surprised to find this! 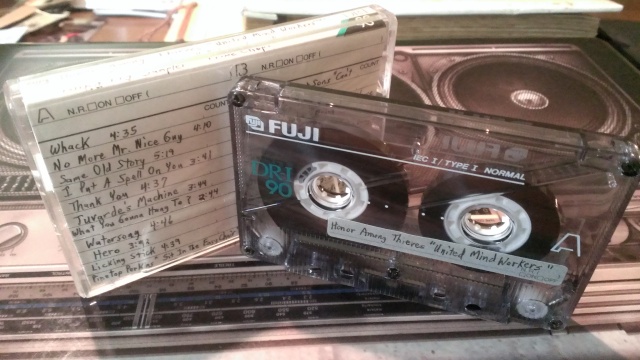 This tape is one Dalton made for me. Side A is the album “Honor Among Thieves – United Mind Workers” and the B side is a Blind Pig sampler.

The guy even wrote down the song times! Man, that is craftsmanship.

Dalton often made me these tapes of dubbed albums. We delighted in playing each other mystery songs, and making packages of tapes to turn each other on to new bands and classics from bands that we loved. I still remember him giving me a copy of “Mother Love Bone” the precursor to “Pearl Jam”. He always came up with some crazy stuff for me. I gave him bootlegs, about the only thing I had that he didn’t. It was a good tradeoff.

This Honor Among Thieves is the album that they subsequently performed acoustically on WORT that I recorded and cherished and have written about before. 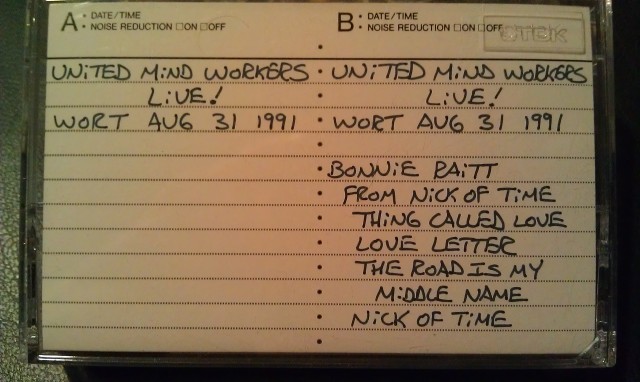 I slipped the tape in my pocket and when I drove to work the next day I played it, loud.

They sound like a bar band, but they are polished. They still play too. I missed a chance to see them at the Harmony, so keep your eyes open for them local in Madison.

Every song rocks on the “United Mind Workers” album. Good hooks and solos and I highly recommend it. All the songs are like friends of mine. I know them from both tapes and the memories came back as I listened to it. Awesome stuff.

The Blind Pig sampler is good too!