As we were walking in I noticed a young guy passing me carrying a cymbal stand. We found our seats and chatted with family and got comfortable. Across the gym, I could see that the guy with the cymbal stand was setting up at the base of the bleachers. Little by little other students and instruments showed up and took their place in the bleachers behind him.

I have to admit I was not in band when I was in school. Not really sure how I made it through school without ever having to play an instrument. It seems nowadays that unless you are in choir, you take an instrument. I didn’t do either. At any rate, I give it up for the pep band. These guys wound up and turned it loose.

They played “Crazy Train”. They played “Eye Of The Tiger” and “Freeze Frame” and several others and I have to say… I dug it. The drummer was wailing, but holding back to the level of school appropriateness, you could tell. They played punchy inspiring fun songs and it was cool.

Turns out the drummer (Sebastian) is in another band too.

I’m not sure at what level most people in the gym were hearing the jams, but I for one was inspired. I hope Joey will end up in a pep band like this, though since he just switched from trumpet to French horn, I don’t know. Are there French horns in Pep Band?

I have been to a couple of basketball games at the Kohl Center and I always like the band there too. There is something awesome about the quick fired up music they play. The sea of red and the little choreographed instrument movements that they do. Fun stuff. 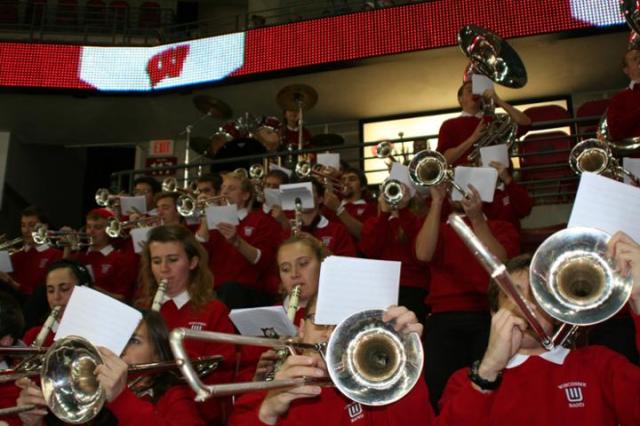 It’s interesting to think that maybe some of these kids may end up in groups like these. Who knows. I couldn’t resist leaving the bleachers and getting a close-up.

I was digging it.