So a few weeks ago I stumbled upon Westside Andy’s web page.

and he has some Westside Andy / Mel Ford Band CD’s for sale. There are links to order them from I-Tunes and CD Baby, but what caught my eye was that you can order directly from him. Cool. I have “Alley Cat”

which is awesome by the way…

but he also has “Handyman” which I didn’t have,

and also “Live On The Westside”.

Unbeknownst to me the “Handyman” CD is recorded live (at The Club Tavern!) but I was at the time more interested in the “Live On The Westside”. So, I wrote a check. This was about as close as you can get to catching someone after their show and buying a CD right from their hands. I thought it was cool.

As an afterthought I decided to make a CD to send along with my order. I have recorded Westside Andy playing with a few people (I thought) and I thought it would be fun to send him one. So I picked my Mel Ford and The Fairlanes recording from the Crystal Corner from 1991 and burned it on one of my blank CD’s that looks like a record. I enclosed it with a note that explained it and my check and request for “Live On The Westside”, which I asked if he could sign. I sealed it up and sent it off to Andy.

Then I wondered. What would he be calling me about? I started hoping he wasn’t calling me angry about me recording the show. I have to admit I never thought about that. Gulp.

The next day I called his number. Yeah, I called Westside Andy. Got the machine. So I left a message and my cell number.

The next day, at lunch my phone rings and I recognized the number. He was calling me. Turns out, he wasn’t angry, he was being super nice and accommodating, calling to tell me that unfortunately he was recently sold out of “Live On The Westside”. He was just playing some shows outside of Madison and they were all gone and he wasn’t going to order anymore, and would I care for one of the other 2? What a nice guy.

I told him I had “Alley Cat” and that I would love if he would send me “Handyman”. Again I asked if he would sign it for me, and he noted that he was playing that night and if I came down he would sign it for me in person. Sadly, I explained I was on-call for work and I wouldn’t be able to make it. Otherwise that would have been supremely cool. I already told Cindy we are going in 2 weeks when he is playing at the Hody again.

Then, after Andy was already so nice, he thanked me for the CD I sent and that unfortunately it wasn’t him on it. He told me that back then he hadn’t been playing with Mel. UGH! I don’t know what I was thinking. I might as well have sent him a Van Halen CD. I felt like an idiot. He was very cool about it though, and told me that he was going to pass it on to Mel Ford. Wow, awesome.

I told him I had another show that I 100% was positive he played on: Paul Black and The Flip Kings at R & R Station in 1993. I had listened to it recently and Andy was called out a couple times on that one, for sure. I promised to send him that one.

He told me to stop up after a show and introduce myself and say hi, and thanked me again for my order.

I came back to the table with a smile on my face. “Westside Andy called me” I announced.

A package from Mr. Andy Linderman!

Inside was “Handyman” and inside he did sign it. 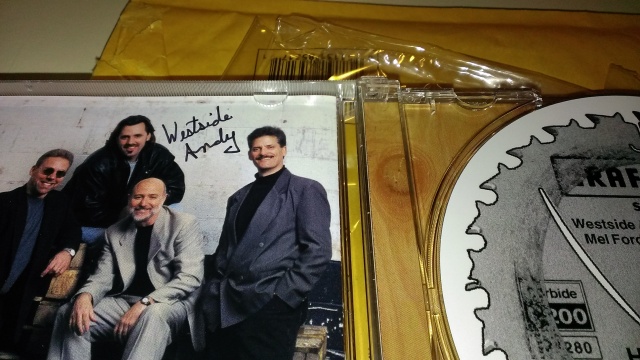 I can’t wait to get out and see him play again.

If you get a change to see him, get out there. He blows a hell of a mean harp and is a nice guy to boot.