Another year another garage sale weekend.

This year however, I wasn’t out trolling for records. I was actually after a push lawn mower (gas or manual). I did find a Craftsman electric edger for 10 bucks, but the only push mower I came across was as old as the one of mine that died and was as much as a brand new Walmart Murray mower, so I passed.

The outing was not a complete bust though.

I did find some music.

There was a non-descript garage with several CD binders, big ones, and I flipped though them. Cindy who was looking through another commented that if I was after any Van Halen CD’s they were all in the next binder. The binder I was looking in had quite an eclectic mixture. Beastie Boys, Anthrax, Nirvana, Ratt, NIN, Coolio, Ice-T, and plenty of HEAVY metal and rap. The majority of the good stuff was already gone, although whoever bought them left behind the jewel case covers. As I flipped the pages, I heard myself say in my head… “Mike, you don’t need any of this man, you have it all on your external.” That was when I saw the Hendrix CD however and my inner squeal drowned out the stable voice in my head. Jimi stared at me from the “The Ultimate Experience” CD. I had to have that one for the Escape, my newly adopted vehicle. I glanced at the sign that detailed the prices and it looked like they were only a buck a piece. I pulled the Hendrix. Then I came across a NIN CD that was actually still in the binder. It was “Broken”. The thought of driving to work listening to “Gave Up” flashed in my mind and I pulled that one too. Then I hit a pocket of Rush. How could these still be there. No Rush fans in Waunakee? I pulled “Power Windows”, “Hemispheres” and “Grace Under Pressure”. When I flipped the page I saw that the rest of the Rush CD’s had been there but were now gone. They left the covers behind though. I pulled them for the 3 I got.

Quite a nice little haul.

I walked up to the man in charge of the garage and set them down and handed him a twenty. I jokingly asked if the CD’s were his. He looked to be in his 40’s and he replied “Oh, they’re mine, but I went digital like a decade ago.” I was surprised a bit, then replied “well they are good for the car” and chuckled. He seemed to be having issues counting out the change and was digging for coins. He had a 10 and a 5 in his hand and I couldn’t understand why he was messing with quarters. Turns out the single CD’s were only 25 cents each. The ones in the box, with fully intact jewel boxes were the ones that were a buck. Sweet. I got them all for $1.25!

At another garage sale, next door to the duplex we used to live in, we ran across someone selling a console stereo. Yeah, a giant wooden behemoth like the console stereo from my past. There was a note on it that proudly stated “radio works great”. I glanced at it, but my internal voice said, no way dude.

It was Cindy who actually started checking it out. They had one of these babies back in the day too. It was when she pulled a sleeveless record from the innards of the console that I got interested. Turns out it was the only one, and it was nothing interesting… but, there was an ancient stack of 45’s suspended by the record player arm. They looked like they had been waiting to drop and play for many many years. The gal announced that if we bought the console we could have the records. I grinned, but was no way going to buy it, or even take it for free. I was curious about what 45’s were stacked there. So I raised the arm and took the stack of 45’s and glanced through them.

I ended up giving her a buck for the 3 I found that I wanted.

“Creedence Clearwater Revival – Lookin’ Out My Back Door bw/ Long As I Can See The Light”. Fantasy Records.

I also took “The Doors – Riders On The Storm bw/ Changeling”. I am not exactly a fan of The Doors in the truest sense of the word, but I though it was cool to have a Doors 45.

The last one was something I thought I should also have. Jeff would have bought it if he was there that day, and I thought of him and drooled a tiny bit as I plucked it from the stack.

“The Beatles – Let It Be bw/ You Know My Name, (Look Up The Number) on Apple Records. Side one is not in great shape, but let’s face it. This is destined for a frame (maybe with Jeff’s drawing of The Beatles to go with it) in the Man Cave. 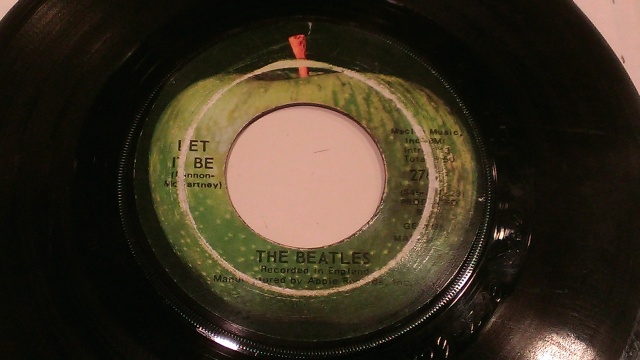 Side 2 is in better shape.

It’s cool just to have an Apple Records 45, especially of The Beatles. I’ll probably never even play it, but it is a vinyl equivalent of an old Spanish doubloon found in an ancient wreck off the coast. It may not even be worth that much, but to me it is.