So, it can be said that I have not been a huge fan of The Pixies. I have really really liked some songs and solo Frank Black stuff, but never have given them a good hard listen in recent years.

When I think of The Pixies I think of “Planet Of Sound” off of “The Pixies – Trompe le Monde”. I LOVE that song.

They have gone through some lineup changes and Kim Deal is no longer with the band (Otis is quick to point out) but they are touring and Dalton and I are going to go see the show in October.

I don’t think I have ever seen a show at The Orpheum before.

The other night Dalton stopped by with a surprise for me. The new Pixies CD !

It seemed only fitting to do a track by track review. Spoiler alert: I like it.

1) What Goes Boom – I have an issue with buried vocals (Otis knows) and despite the great groove to this track at first I was kind of put off. I have listened to it several times now and DESPITE the oddly low vocals it is growing on me. The music is perfect to start the CD off with.  The chorus is stuck in my head. The wailing guitar is awesome. Make some boom! Maybe when I have the lyrics down it will be even more infectious. It is the only track that has these weirdly low vocals, so that part is good too. I was afraid it was going to be like this the whole album.

Aside: Do you still refer to a CD as an album, or is that a holdout from my LP days?

2) Green And Blues – Love the guitar work again. This time more melodic and toned down, but very Smashing Pumpkin like in their own Pixies way. Does that make sense. Again the chorus is catchy and singable. Love it.

3) Indie Cindy – “Put this down for the record”   this song is kooky and fun. I like the Frank Black semi-rap. Good song.

4) Bagboy – This song was apparently released way before the album. It’s grungy and good.

5) Magdalena 318 – This track is dreamy and smooth. One of my favorites on the whole album. I really have to get the lyrics out and follow along with this one.

6) Silver Snail – Another dreamy sounding track… this one not quite as strong, but still good. “He will awake from his dreams…”

7) Blue Eyed Hexe – Awesome guitar work on this one. This one will get under your skin. Another top cut from the album for me for sure. This one reminds me of The Smithereens a bit. Wow, there is a reference. I even like the screamed lyrics part. Good stuff.

8) Ring The Bell – This one is not my favorite. Too soft.

9) Another Toe In The Ocean – This one comes in just before “Ring The Bell”. Not awful, but a little to introspective and no good hooks or awesome vocal snatches to hang on. It’s pretty much the same from beginning to end.

10) Andro Queen – Now your talking. This one is very “Black Angels” but with less darkness and more spaceyness. I love it. The sing song quality of this one really works for me. Potentially my favorite track.

11) Snakes – Good driving beat on this one. “When the rattle shakes.” Heard this track as I was driving the new car down a road with cornfields on each side and cranking it loud. This is what I expected The Pixies to sound like. Another top track.

12) Jaime Bravo – Another grungy guitar layered under this track. It’s a good closer. Solid and a good combination of sing song vocals over the grunge.

All in all I have to say I like this one a lot.

Of course the package is a bit schitzo 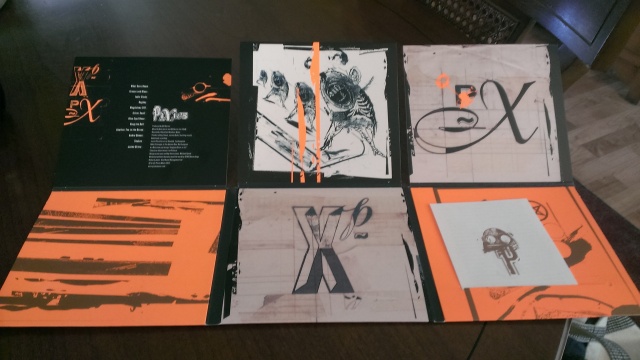 and the lyrics (although I appreciate them being included) are a bit on the “break out the microscope” side.

Nonetheless, on The Aural Retentive review scale, which I just made up, “The Pixies – Indie Cindy” gets a 8.5 out of 10.

This is only the second song by song review I have ever done here. That gives it some clout too.

Thanks for the CD Dalton. Waiting patiently for October!