East Side Foods was about 20 blocks away from me. Getting there was always an adventure. Rain, snow, heat, any kind of weather. Every so often I got a ride, but that was a glorious exception.

In the summer I rode my skateboard. It was an old Nash that I found abandoned on a trash pile by the curb one day. It wasn’t a long board, or stylish, in fact it was old, but it got the job done. I loved it. It looked like this one. 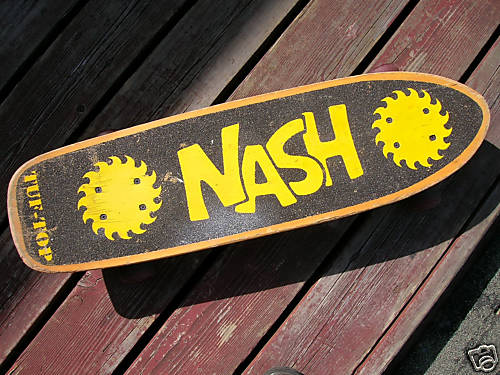 I didn’t consider myself a shredder, but it shaved a good 15 minutes off of my walking time of about almost a full tape. That was how I noted time. It was probably about 30 to 40 minutes. About a side and a half of most tapes. I carried a backpack with at least 10 or so tapes (more on the reason why later) and my other winter summer spring and fall companion on every trip… my beloved Sony Walkman with auto-reverse (essential for winter walking). Not sure I had mega bass like this one, but it was this style.

I had sport headphones, the kind that were a cross between ear buds and behind the head over the ear kind. This was absolutely essential. That way I could wear a hat in winter and a poncho on rainy nights when I headed in for my 11:00 shift start.

Riding the skateboard was fun, but I wasn’t doing ollies and riding rails, it was simply transportation. There were a lot of smooth flats if I cut through campus, but that added time. It was always a judgment call, and easily made if I was late. If I was late I had to go along Downer Avenue, a straighter shot but a busy road, and then down Locust. Then I could cut over to Oakland via E. Newberry Boulevard. Newberry was a quiet little left and right lane divided road with a canopy of trees and was good on rainy days for being slightly less wet.

About 45 minutes before my shift I would make the fateful decision on how to get there, board or feet, then select tapes for work and a tape to listen to on the way. Walking to work was boring at best, but without music it was a funeral march.

Every once in a while I would get part way there and my Walkman batteries would die. Ugh. That was the worst! At first I would notice a slight pitch offness of the song and then it was clearly slowing down and like 30 seconds later…   WHIR WHIr WHir Whir whir whi wh w… nothing.

I wised up after that happened a few times and started carrying spare batteries.

I only fell a few times on the skateboard. The beauty of not tricking on the way and keeping to the flats. Of those few times 2 were memorable.

The first was when I fell backwards, shooting the board out in front of me. I landed on my back with the backpack breaking my fall fortunately, but the tapes I was carrying did not fare so well. All the plastic boxes were broken into a million pieces. A couple of the tapes themselves were broken too, but I was able to fix those with my cassette tape repair kit. I had tons of chassis and spools and screws from other tapes that wore out or were wrecked somehow and I saved them for just such an emergency. Everyone survived.

The second time I fell however, there was a casualty. My skateboard. I was heading down Downer during the time I was on second shift. I was late and had cut over on Downer to save time. It was rocky a bit that way and although I was careful to avoid what I could, I hit a patch of pebbles and the board stopped shooting me forward. My body going forward then propelled my Nash board backwards into traffic. I didn’t see it, but I heard it as a Milwaukee city bus unavoidably ran it over. CRUNCH!

I got up dusted myself off and stood on the side of the road looking at what was left of my board. It was the saddest thing I had experienced in a long while. Cars tried to avoid it while I looked for a break in traffic to try to collect the pieces. When I was able to I realized that both trucks were broken and the board itself was snapped in two. Unsalvageable and unfixable. The board was simply dead. I lovingly placed the pieces in a roadside trash bin and broken-heartedly made my way to work, late, and got yelled at for being late, but when I described my experience, they forgave me. The Kaufman’s were nothing if not sympathetic to the college boy experience.

Winter walking had a whole different ritual and path and technique.

During the deeply cold Milwaukee winter, choosing the tape to listen to on the way to work was of the utmost importance. Once I started out there was no way I was going to take off my 2 pairs of gloves and change tapes, so what I picked was what I listened to all the way there. There was constant danger of fogging up if I bundled too much, my glasses would freeze up, but if I didn’t bundle enough I arrived at work looking like this guy. 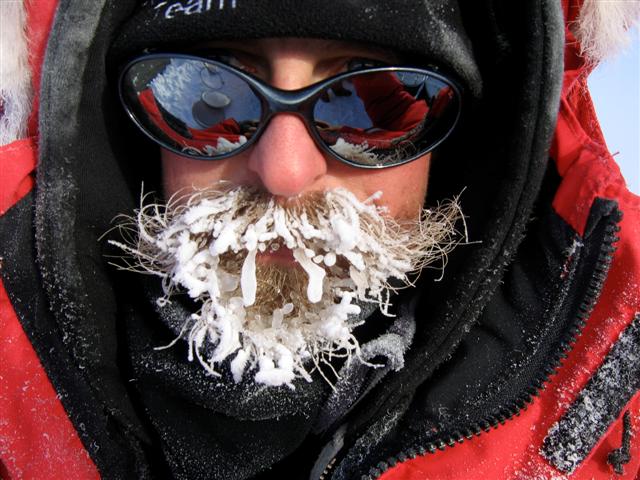 So I layered and bundled and double gloved and put on my headphones and double hatted and then set off in the wind and snow and cold.

My most vivid memory of winter walking is of listening to “Iron Maiden – Piece Of Mind”.

This tape was a staple of winter walking. It started with “Where Eagles Dare” and the pounding drum beats and driving guitar helped me face the cold and walk with aggression down the street. I loved walking silently with Iron Maiden blasting in my ears. People that passed me got a polite head nod while Bruce was high-pitched screaming in my ears. The whole tape is fantastic for walking to. If you work out, it might me a good workout tape too. Aggressive without being Slayer. Heavy metal, but reasonable.

I’m listening to “Iron Maiden – Piece Of Mind” as I write this and I notice that the cadence of almost all the songs is probably a big part of why this tape became my go to tape for winter walking. It gets my blood boiling even today and the beat is steady and metered and probably kept me walking at a good pace.

Usually by the time I got to “Quest For Fire” I could see the store and I imagined getting inside to be like standing by a huge bonfire created in the song, a huge burning gift of life for the cave people. Then came “Sun And Steel” another welcome song about heat.

I’d trudge through the doors of the store, thighs frozen, chip the snow from my moustache and try to warm up in the back before I started my shift. My uniform, my East Side Foods smock with big pockets was a welcome added layer. I had my store key for the deli lock and my trusty box cutter in my pockets. I had made it.

My box cutter was decorated. We each had our own and most just had their names on them, I of course went a bit further. I decorated mine with some eyes (those are Prince’s eyes) and some skateboard stuff and a phrase we used at work a lot. I still have it!

Anyway, my most vivid summer walking memory is of a night after work when I was on second shift. We all decided to go to the bar after work and BE those guys instead of serving them deep-fried deli food and plastic tubs of premixed snack nuts. We went across the street to a bar I had never been in and we all got a beer. The drinking age was 18 then. I ended up having two, which for me was plenty to get a buzz. I’m a lightweight. After hanging out for a while and letting a quick rain shower pass, I left the bar and headed home.

The streets were quiet at that time of the morning and the fresh rain was still dripping from the trees and made it a little eerie. There was a mist around the streetlights that made it seem like it was still raining when it wasn’t, probably rain vaporizing off the hot lights. I reached into my backpack and fished out a tape I was digging on “Talking Heads – Speaking In Tongues”.

The combination of buzz and eerie post rain and the lateness of the hour all combined to make a surreal event of my trip. I walked up the E. Newberry Boulevard way under all the trees and felt like David Byrne and I were the only ones left in the whole world. I recall I stopped walking and took my headphones off convinced that the world had stopped. No one was moving on the street, no cars, no dogs barking, nothing. I shook it off and walked on to “Burning Down The House” and “Making Flippy Floppy” and “Moon Rocks” and by the time I hit Downer I saw my first car headlights and the regular world flooded back in. I got home and threw off my stuff and crawled into my air mattress on banana boxes (worst bed in the world) and passed out.

This routine, of listening to music while getting to and from work was vital to the whole experience.

It was also the reason I made a lot of mix tapes back then. The right combination of music for the timeframe needed was all important. If you can’t stop skateboarding to change the tape, or unbundle to change the tape, you make damn sure you have selected the right one, or put together the best possible tracks and don’t need to.

There was no such thing as a playlist back in those days.

A mix tape WAS your playlist.