As I have stated before, I converted most of my discs and DVD’s over to an external drive. Everything all in one place, backed up and protected. Simple.

I had forgotten what a pain it was when I was getting gobs of stuff and copying stuff from Dalton and other friends and running out of space.

My hard drive that seemed immense before I really knew what a Gig was, ran out of Gigs and suddenly I couldn’t store anything more. I was devastated.  A stroke of luck happened shortly after that and the computer died. I say luck because I really didn’t have that much stored that was unrecoverable, and the next computer we got had a CD burner. The latest hi-tech gadget. My media habits ran wild with the new hard drive until it got full again, in seemingly shorter time. Ah, but I had my burner.

Thus began a painful phase of downloading, getting too full, then burning recent acquisitions to CD’s (yes CD’s) and printing little paper cards that had the contents of each on them.

This one full of Blues just surfaced the other day while I was looking for something else. 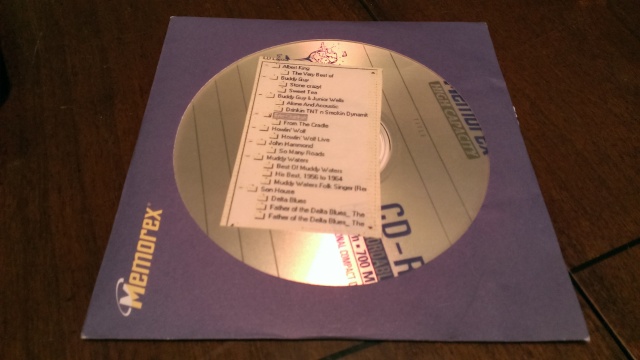 Then we got our first computer with a DVD burner. OMG.

I could 5 CD’s worth of stuff on a single DVD! This also provided me an opportunity to consolidate bands together. It was a process, but in the end I had eliminated tons of doubles and had a fine finished product. Bands that had prodigious output and lots of bootlegs and such got their own cases. 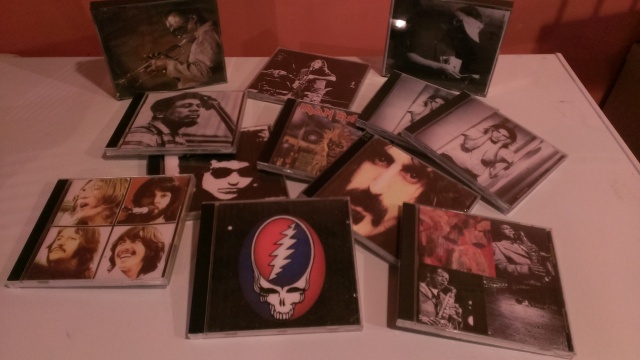 The Miles Davis collection (top left) is  3 DVD’s and the DJ Shadow collection (top right) is 2 DVD’s. There is Beatles, Grateful Dead, Zappa, Dylan, Iron Maiden, Jazz and some John Zorn thrown in too. Finally all my stuff was collected in nice collections.

About the time I finished collecting all these together I got my first external hard drive and that was the end of all burning for the most part.

It made me smile when I came across this and I think I must have kept it for that very reason. A classic relic.